Did Joe Scarborough just call Elizabeth Warren a liar on her claim that Bernie Sanders told her "a woman can't win?" Viewing Joe's skeptical expression on Tuesday's Morning Joe in the screencap, and listening to his words, the conclusion over this unproven CNN scoop would appear to be: yeah, he did! At the very least, Scarborough expressed deep skepticism over Warren's version of events.

Scarborough obviously knew he was wading into deep water, prefacing his remarks by claiming, "I'm not getting on anybody's side." Yeah, right. Joe then proceeded to administer this tomahawk chop to Warren:

"Do any of us really believe that Bernie Sanders is going to say [imitating Sanders' voice], "I don’t think a woman can win, Elizabeth." Nobody's going -- come on -- who’s going to say that?" 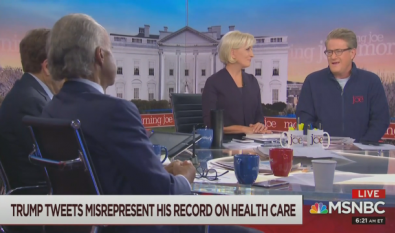 Scarborough said he wasn’t siding with anyone on the Bernie-Warren dispute, but sure sounds like he just called Fauxcahontas a liar.

lucky for grey beaver, he did not break
her head open on his desk (like his intern).

Warren has established the fact that she has no credibility. That will bite her repeatedly.

Love your articles, keep it up!

Of course he said it. And it is true.

Hillary showed that....will be a long time before a woman gets in the WH..unless they run Oprah or perhaps Moochie.

OK now you have to fill me in on this one.

Many thanks, proust: I will be searching for lost times. ;-)

Scarborough would believe it if someone said it about Trump.

Joe is just siding with who the DNC told him to side with.

Is the socialist bourgeois having rape fantasies again?

Joe is push for who he calls “teflon Joe” is all:-) That’s why Bernie supporters want him strung up!

Since Warren has a lifelong pattern of lying to get what she wants, it comes as no surprise that she is lying about this. OTOH, Morning Joe and his posse are all liars as well. And Bernie, like Lizzie, is a parasitic growth on the body politic, and lies constantly. I suggest a three-trapdoor gallows.

Bernie would never say that...

She’s a victim who needs protection... from employers who won’t hire her because she’s pregnant, from people who treat her badly because she’s an American Indian, and from male prejudice because she’s a women.

None of it is true.

It’s disguising Warren would choose to get ahead based lying and pity parties rather than on merit. She’s not fit to be President.