President Trump on Wednesday blasted Speaker Nancy Pelosi (D-Calif.) following a heated meeting at the White House, questioning her mental fitness and commitment to the country.

"Nancy Pelosi needs help fast! There is either something wrong with her 'upstairs,' or she just plain doesn’t like our great Country," Trump tweeted.

"She had a total meltdown in the White House today," he continued. "It was very sad to watch. Pray for her, she is a very sick person!"

Pelosi's office did not immediately respond to a request for comment.

Pelosi, Biden, Mueller, it is all the same ole song. None of them are up to speed.

The photos do a good job of demonstrating who had the meltdown.

I don’t know what Nancy’s problem is save having a demon but that first pic with those eyes looks like some form of dementia or alcoholism or both?

25 posted on 10/16/2019 6:00:57 PM PDT by polymuser (It's discouraging to think how many people are shocked by honesty and how few by deceit. Noel Coward)
[ Post Reply | Private Reply | To 1 | View Replies]
To: yesthatjallen
As I mentioned in another thread, the person "in charge" ran out of the room. Quitter.

My understanding is that she is ruthless.

28 posted on 10/16/2019 6:10:09 PM PDT by ChildOfThe60s (If you can remember the 60s........you weren't really there)
[ Post Reply | Private Reply | To 3 | View Replies]
To: yesthatjallen
The lefty response to POTUS's tweet are vile and are coming from just a dozen or sp, many repeated or recycled. Twitter puts them at the top, repeats, recycles their tweets, dozens of tweets from the same group of lefties over and over again while putting conservatives at the bottom or made very sparse.

It's been this way since I can remember and I don't usually look at responses to POTUS's tweets because it gets old. But I was expecting a short video of Pelosi losing her composure and instead saw there is only a photo which can be interpreted whichever way one stands in the political spectrum.

Nancy Pelosi needs help fast! There is either something wrong with her “upstairs,” or she just plain doesn’t like our great Country. She had a total meltdown in the White House today. It was very sad to watch. Pray for her, she is a very sick person!

She is an alcoholic— Trump knows that and a lot more. See: The USAF bill for one year on her “commutes” back and for to CA. The Bar Bill— for a junket to Italy. It’s all there.

Meanwhile a true mental case— in order to “defend” herself— threatens to run for Prez— hitlery rides again in total self delusion.

Mentioned elsewhere that what is driving this insane push to at all times.... back to the wall insensate political insanity-— is the Transcript of the Phone call, which included the word: Crowdstrike. The Ukrainians that are in power now are helping find the physical proof that Russia did not and could not have hacked the DNC server. The FBI was never allowed to see the server to analyze for a true criminal hacking— noooo, Comey allowed a private firm hired by DNC to “determine the hack”. Which, of course they did not do.

Because- it was Seth Rich who gave a thumbdrive to an English go between who got the data to Wikileaks. The quantitiy of the data proves it could not have been “downloaded” in a hack— no way.

So “Crowdstrike” has been found, and already in Barr’s hands— speculation, but something has them completely running in TERROR! Along with the IG DOJ FISA report— which involves ALL of the GANG of Eight of High NatSec Clearance.
Schiff, Warner, Pelosi, Schumer— all in the crosshairs. And all implicated in the FISA fraud. Game. set. match.

“she is a very sick person!”
Code for Pedophile/Satanist in Q speak.

Nancy got herself into a street fight with Trump, which is not where you want to be. 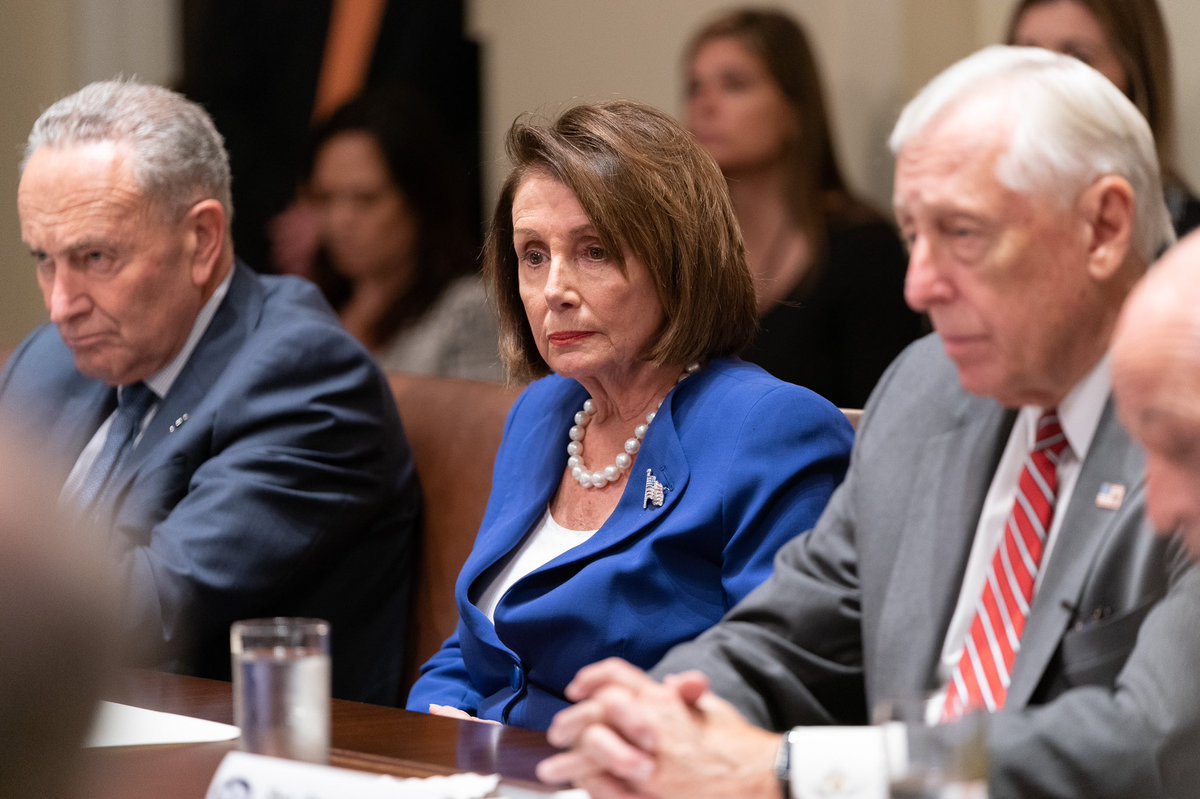 The moment it dawned on Nancy that all the tantrum-throwing in the world wouldn't get her her way.

Yep, they ran away.

What a total mentally ill b*tch!

Haha! Trump is just repeating exactly what she came out and said about him.

Even the bust in the background is repulsed by Ms Pelosi. LOL. I haven’t the foggiest idea who that is though.

She is all about corruption of blood. The Donald should know this by now. Marines are standing willing and able to end this. She was the architect of the 2008 crowning of the boy king and the tanking of the economy. This is Atlas Shrugged 2020. Just do it...