RUSH: I had a sound bite yesterday and I didn’t get to it and I want to get it done now because it has nothing to do with the debate, but it’s tremendous. Monday night on Fox there was a fill-in host in there, Sandra Smith, and she was talking to a woman named Lynne Patton. Lynne Patton is the regional administrator for HUD, the department of Housing and Urban Development. She is in the Trump administration, and she is African-American, and she is also from the district represented by Alexandria Ocasio-Cortez. 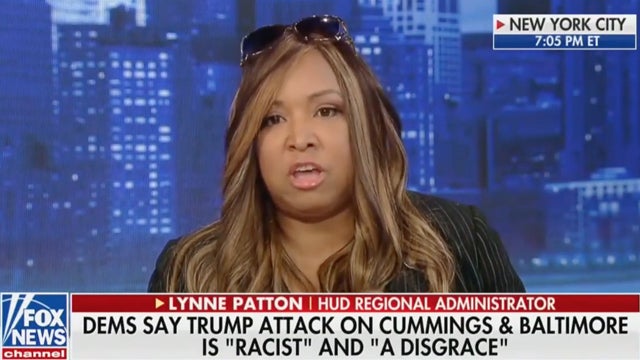 The question: “The case is obviously being made by supporters of the president, members of his party, that this president has been very good for minority communities. When you look at the very low employment rates, when you look at wages — ” Wall Street Journal has an editorial today documenting the vast wage increases for 99% of the American people, further obliterating Democrat arguments. Anyway, the question is being asked of the administrator for HUD, regional administrator Lynne Patton, “All these attacks on Trump, he’s actually been very good for minority communities, hasn’t he?”

PATTON: I am in Ocasio-Cortez’s district more than she is. She’s more concerned about conditions at the border than conditions in her own backyard. This past week I had to shut down a children’s day camp because dead rats were falling through the ceiling and hitting the ground and falling on children’s desks, so infested with maggots that they broke apart when they hit the ground causing staffers to throw up. That’s what’s happening in New York.

RUSH: Oh, my goodness. Oh, my goodness. This is happening in the Ocasio-Cortez district? Holy smokes. Ocasio-Cortez claims we’re running a concentration camp down at the border? Again, this is Lynne Patton. Get this ready to play again. This is one of those things, “Wait, did I just hear that?” Yes, you did. Lynne Patton, regional director HUD, Trump administration, African-American on Fox on Monday night describing the lamentable blight and rat infestation in a children’s day camp in the district of Alexandria Ocasio-Cortez.

PATTON: I am in Ocasio-Cortez’s district more than she is. She’s more concerned about conditions at the border than conditions in her own backyard. This past week I had to shut down a children’s day camp because dead rats were falling through the ceiling and hitting the ground and falling on children’s desks, so infested with maggots that they broke apart when they hit the ground causing staffers to throw up. That’s what’s happening in New York.

RUSH: It’s not the maggots that broke apart. It was so maggot infested that it was the rat carcasses falling apart when they hit the desk, and that’s what was causing people to vomit. And this is in Alexandria Ocasio-Cortez’s district. And it’s classic. She’s more concerned trying to score political points by making things up about the horrible conditions for illegal immigrant kids at the border while ignoring what’s going on in her own district. It’s classic.

“Dead rats were falling through the ceiling”

Set to the tune of “Dancing on the Ceiling”.

Reading that story made me want to vomit. That is just NASTY!

Yep! A lot of them were on display standing on rooftops and parking lots cheering the fall of the towers on 9/11...

I can CONFIRM this! I l lived in her district until 7 years ago and late at night you would see the garbage bags moving from the rats. And even worse were the cockroaches, every building has them. One night this drunk lady who lived on our top floor started an oven fire that spread and when the fire men hosed it down, the water went behind the walls and flushed out the cockroaches MILLIONS of them on the stairway that stunk like hell. That whole area is just one huge sh*thole and getting the hell out of there is the best thing I ever did. The people I know who still live there cannot STAND this moron AOC and they told me she won by organizing illegals to vote for her which I believe as that whole area is illegal central with a huge fake ID market. All the time I would see them with EBT cards

6 posted on 07/31/2019 12:48:26 PM PDT by GrandJediMasterYoda (As long as Hillary walks free, equal justice under the law will never exist in the USA)
[ Post Reply | Private Reply | To 1 | View Replies]
To: Anti-Hillary
Reading that story made me want to vomit.

You're in luck - you won't hear the story again. The MSM will ignore it.

If this story had taken place at the border it would be front page on the Washington Post and New York Times. AND CNN would have included questions about the rats for the debate tonight.

But the children who had rats fall on them were American children living in a democrat city - so THEY DON'T MATTER. The story will be ignored. Illegal children 'count' because they can be used by liberals to express hatred for ICE and Trump. Liberals don't really give a damn about the children of illegals either - they're just vehicles for liberal hatred ...

Isn’t it normal and expected for Rats to be pervasive and out of control in cities ran by Democrats??

Children don’t matter to demonrats. They never did. Just like “racism”, “children” are a tool to appeal to the inner hearts of humankind. The problem is that “racism” is being watered down but somehow the use of “children” has never been watered down.

We need to stop saying well if the story had taken place at such-and-such and it was on some lame arse news channel then it “would matter”. The truth of it is that to most people if it is not in their hemisphere of their life it doesn’t matter. It’s all words and noise to them until it affects them. Truth is most people don’t give a crap until it affects them and when it does then they want to move heaven and earth as to why this happened and pour money into it to fix it. Do they they want to fix it even though it affects them? Nope. AH heck no. They want someone else to do it.

This will be a flash in the pan and the fire won’t be put out it will burn like a mine burns under the surface. The demonrats will let the mine burn while people on the surface go about their daily lives until one day the mine collapses in one part and then the voices will rise as to why this is happening and what is being done about it. Then those voices will return to their hemisphere carrying on with their daily lives nose deep into their devices longing to be any where else but where they are.

I refer to them as DemonRats. Because demonic is what they are

And yet, no one has mentioned rats or cockroaches, nor have we seen any photos of the same, in those ‘concentration camps’ at our Southern Border! ;)

My teacher’s blowing lunch
New York ain’t what it used to be
Ain’t takin’ care of us
It won’t be long ‘til typhus comes to greet me...

Pervasive is a good word. Pervasive corruption, that is the underlying theme here. These cities have tons of money. They tax and spend like crazy. The Dems who run these cities and send federal pork dollars to these cities all have the political philosophy that more government = more better but all the evidence over the decades show this to be completely untrue. There is no accountability. The corruption is endemic to the Democrat machine. Races, Ages, Ethnicities, Sexes these are just wedges used to ensure that their political machines are well greased with taxpayer dollars. It has to be brought down.

The Dems have a machine that greases unions, big developers, and narrow special interests. But at the end of the day, their methods fail just about everyone in just about every way. A system that encourages private ownership, private property, fiscal responsibility, accountability, free market, low taxes and minimal regulatory burden and individual liberty is the path to prosperity. The Democrats political machinations brings only decline, decay, debt, and dependency.

The Path to Slavery! only no whips needed this time.

The party hasn’t changed their position on that issue - just their tactics.

There seems to be a pattern of Dem’s being associated with filth.

Waitress, there’s a maggot in my district’s office.

(just as true as what she says about Trump)