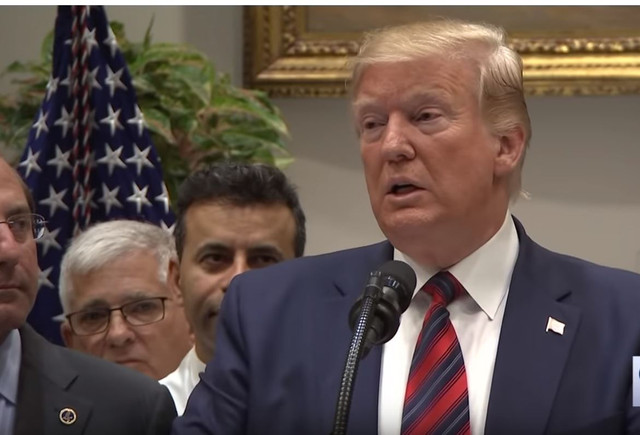 "You know John Kerry speaks to them a lot. John Kerry tells them not to call. That's a violation of the Logan Act. And frankly, he should be prosecuted on that, but my people don't want to do anything that's ... only the Democrats do that kind of stuff, you know."

TOPICS: Extended News; FReeper Editorial; Foreign Affairs; News/Current Events; US: Massachusetts
KEYWORDS: 201905; djibouti; eritrea; hanoijohn; hassannasrallah; hezbollah; iran; johnkerry; kerry; lebanon; loganact; lurch; massachusetts; sudan; tehranjohn; traitor; trump; yemen Navigation: use the links below to view more comments.
first 1-20, 21-40, 41-60, 61-62 next last
POTUS is sending a message that he wants to hang Kerry (and he should be hung as a traitor) but "his people don't want to" because it would make them look like Democrats.

The expected EMOTIONAL response from conservatives would be one of outrage that POTUS is letting the traitors get off without facing justice but that's the wrong response.

I have no criticism whatsoever of what POTUS is saying here because he controls the timing and the optics, he always retaliates and never draws first blood. So we should agree with POTUS's advisors because a careful analysis shows POTUS will neutralize Kerry by bringing Iran to the negotiating table.

By controlling the narrative via tweets and press conferences, POTUS is informing the public that Kerry is a traitor but by bringing Iran to the table, he, POTUS is in control.

By allowing "my people" to restrain him from prosecuting Kerry, POTUS shows the public that he is not out of control, that he is following his higher instincts, that he believes Kerry is a criminal (which he is).

It is you and me, the electorate. In other words, POTUS will let the voters decide in 2020 who is right.

As conservatives, we have a wave of fleeting emotion building as anger to hang the SOB that is John Effing Kerry but the goal is not to incinerate enemies at will but to gain the strategic ground necessary to win the war against them. In other words, cooler heads prevail to win the long game.

POTUS recently had his senior national security advisors hold an unprecedented meeting on Iran, not as always it always convenes in the Situation Room, but rather at CIA HQ in Langley, VA. This was highly unusual but it was reported the topic was Iran and nothing else was reported. This tells us something important and new arises with the general strategy towards Iran.

POTUS needs to bring Iran to heel, plain and simple. By doing so, he makes Kerry look foolish, weak, impotent. And that optic is a goal going into 2020. But no matter what the outcome of the 2020 elections, POTUS can always hang Kerry even after the 2020 election.

And frankly, he should be prosecuted on that, but my people don’t want to do anything ...

Mr. President, INSTRUCT ‘your people’ to WANT to prosecute this subversive law breaker.

Our country will not get healed without the rule of law being reestablished.

JF Kerry is “Healing #1” just asking to be employed

Oh for cripe sake, this is MASTER TROLLING.

People who understand Trump take him seriously but not literally.

6 posted on 05/11/2019 3:38:00 PM PDT by LegendHasIt
[ Post Reply | Private Reply | To 1 | View Replies]
To: Hostage
So we should agree with POTUS's advisors because a careful analysis shows POTUS will neutralize Kerry by bringing Iran to the negotiating table.

I agree with your take on this because Trump is/will do something about it. He does see the bigger picture. If this were coming from the typical politician that we've seen come and go for decades I would consider it empty rhetoric. Trump is nothing like them.

The trouble with that theory is that Republicans *never* prosecute *criminal* Democrats. Sorry, the ballot box is not enough to make up for terrible criminal acts.

The Clintons and their money laundering through their foundation. Plus the people they have murdered, raped, defrauded, etc. They are organized criminals.

The Obama gunrunning and political espionage.

The terrible abuse of federal agencies for corrupt purposes.

The list of such offenses is long and gross.

There MUST be prosecutions. The ballot box alone cannot fix such evil. If that were the case, then we would have no prisons, and let the voters decide what to do with felons.

I suspect the voters would quickly rediscover hanging.

The Act was amended in 1994, changing the penalty for violation from “fined $5,000” to “fined under this title”; this appears to be the only amendment to the Act. Violation of the Logan Act is a felony. Only two people have ever been indicted on charges of violating the Act, one in 1802 and the other in 1852.

The Logan Act never should have been enacted. It is too broad. It can easily be abused by either party and applied against US.

Joe D says (and I believe him) criminal referrals are coming and the first will be next week on Comey. He says it will be the start and that Brennan will follow as will many others.

I think POTUS will let Kerry twist in the wind while the rest of the indictment fireworks dominate the news.

BULL SHIOT Do your job if your “people”don’t do theirs dump them and get some real “people” in those positions. You already stood by 27 months while nothing was done with Clintion,. Obama Comey and Lynch. How much longer do you think we want to hear your rhetoric and read your tweets.

Then get new people. This is war, every hesitation is seen as weakness. When he said to just let the HRC stuff go early on they responded by handing out political machetes and went right for Trump’s throat.

He is the president. If he truly believes that Kerry violated the Logan act then either prosecute him or quit talking about it. Saying “my people don’t want to” implies he is subject to their wants and not his own.

It’s kind of hard to fire the GOP from the body politic as a whole, which is what Trump seems to sound like he is addressing. It is what it is.

It’s not the worst move in the world to talk like that. If the end game is a public reductio ad absurdam of the Democrats, then rabid power games are not the thing to pursue.