Democrats are gloating over the sentencing of former Rep. Steve Stockman (R-Texas) last week. He was ordered to serve 10 years in prison for the vague charges of mail fraud, wire fraud and money laundering. Whenever prosecutors want to get someone who hasn’t actually committed a crime, they use those vague but scary sounding charges. He was also ordered to pay $1,014,718.51 in restitution, to be divided between him and two other co-defendants.

What did Stockman actually do to warrant this? He facilitated four donations from two donors totaling $915,000 to two nonprofits he was associated with. One of the nonprofits spent some of the money on a campaign mailer showing the differences between Stockman and the senator he was running against. It is a (c)4 and its purpose was to educate voters. The mailer did not endorse Stockman or tell people how to vote, so it did not run afoul of campaign laws. The donors were fine with how their money was used, which was mostly for youth education.

But prosecutors said it constituted fraud. They said Stockman stole charitable contributions and used them for personal expenses. The truth is, he never benefited personally but took some pay before he ran for office. He was a fundraiser for the nonprofits before he was in office. The nonprofit merely chose to spend some of the money later on a campaign mailer. Stockman’s charitable efforts were ignored. He was recognized for hiring the handicapped including the deaf, blind and mentally handicapped. Gallaudet University, the first school of higher education for the deaf, gave him an award for his efforts.

The case against Stockman was so weak it took prosecutors four grand juries to finally get an indictment. It took four years to investigate what should have been a six month investigation. It cost $15-20 million to go on a fishing expedition, which included intimidating witnesses.

Benjamin Wetmore, a key witness for the prosecution and an attorney for one of the nonprofits, says Stockman is completely innocent. He described what happened, “If you can get away with the lie to exert maximum political and personal damage on someone, it doesn’t matter if a correction gets printed later, or if an appeal succeeds; all that the masses remember is the original hit.”

Prosecutors piled up so many vague and confusing charges that Stockman could have ended up the rest of his life in prison. Even 10 years was unfair. A 2016 study revealed that between 1986 and 2014, the average sentence for a defendant who received a prison sentence for federal public corruption was just 13 months. This is a tremendous disparity. It sounds more like a sentence someone would get for wrongful death. Stockman has been in prison since April.

Stockman believes he was targeted because of his conservative activism. He was known for boldly opposing President Obama. He was a Congressional whistleblower on Obama administration corruption, with such actions as calling for the House Select Committee to investigate the government's handling of the Benghazi embassy tragedy of lost American lives, exposing President Obama’s payment to the Haqqani terrorist network in exchange for the release of Army deserter Bowe Bergdahl, and revealing Secretary of State Hillary Clinton’s violation of the Iran sanctions to allow the sale to Iran of specialized steel used in nuclear weaponry.

The DOJ is full of deep state operatives. They have continued conducting political witch hunts against vocal conservatives under the Trump administration. Former Attorney General Jeff Sessions did nothing to stop it. The deep state went after Stockman hard because he was a threat. They wanted to silence him and make an example out of him, so others would be hesitant to follow in his footsteps.

Sadly, most of the conservative media hasn’t reported on this corruption. They are running articles that rubber stamp the press releases from the DOJ. The press release announcing the sentencing is filled with errors and lies. For example, it says that "Stockman failed to pay taxes on any of the $1,250,571.65 in fraudulently acquired donations."  Well, only a slim portion of those donations made their way into Stockman's personal accounts — what he was paid before he ever took office. And taxes were paid on that income.

U.S. Judge Lee H. Rosenthal appeared to be biased against Stockman throughout the trial. She fell asleep several times and reportedly is friends with Stockman’s opponent. Wetmore observed, “At one point, during an argument I was presenting to her in court, she was making obvious non-verbal cues such as rolling her eyes and laughing at my argument quietly, just feet away from me.” After she announced the sentence, she sarcastically said, “That’s a long time, but Mr. Stockman, I think you earned it.” Stockman intends to appeal.

Will Maxine hire her whole family ?

The DOJ is full of deep state operatives.
(Democrats)
If they cant win by cheating slow progress as much as possible and repeat. 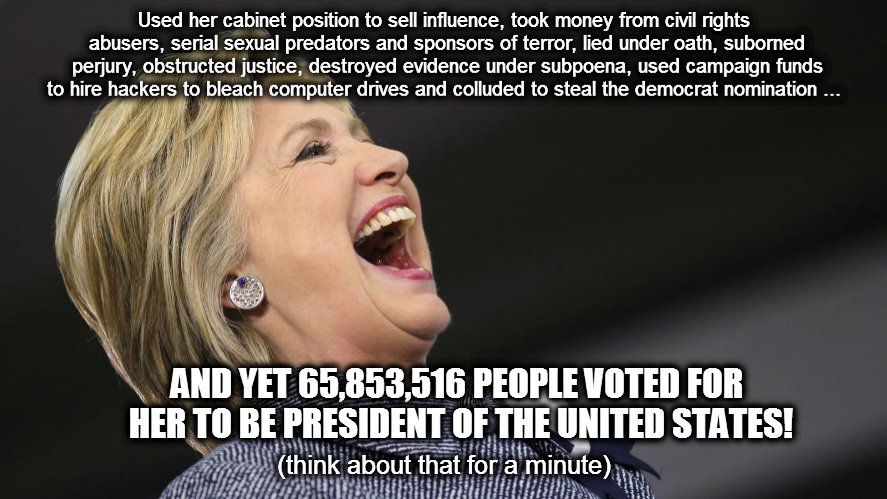 And is running for president again :)

Here’s another take on ex-Congressman Stockman stating he is innocent of the criminal charges made. Sounds like a railroad job.

We are getting more and more corrupt.

Smells a lot like the DoJ prosecution of Alaska US Senator Ted Stevens in 2008. You know the one where he lost his reelection bid and then the DoJ ‘discovered’ prosecutorial misconduct and voided the indictment thus voiding the criminal conviction. Will be instructive to see how the appeal comes out.

Welcome to the USSA.

“Former Attorney General Jeff Sessions did nothing to stop it. “

We know all about Jeff Sessions.

We can trust him. Remember? Or was that brilliant disinformation? I can’t keep track. Wondering when the plan is going to be implemented so we get real justice for real criminals.

I was starting to buy into the lie that Stockman was a crook.

Now it turns out this was just more prosecutorial political misconduct.

Prosecutors can convene as many grand juries as it takes to get the indictments they want.

Prosecutors have been given immunity far beyond anything reasonable, by the Supreme Court, and fairly recently, about the 1970’s as I recall.

They can lie, recruit false witnesses, and have personal conflicts of interest. They are immune if the case is not brought to trial, and mostly above the law if it is.

How can this be? Surely Silent Executioner Sessions wouldn’t allow such injusice! Stockman must be a bad human being!

Can you say presidential pardon?

This is how it works. The laws are open ended. They allow prosecutors to convict anyone of anything. THAT is the purpose of the laws.

By convicting innocent people, they get the numbers up, and claim they are fighting crime.

The government is not your friend.

19 posted on 11/12/2018 8:35:03 AM PST by I want the USA back (It's Ok To Be White. White Lives Matter. White Guilt is Socially Constructed)
[ Post Reply | Private Reply | To 1 | View Replies]
To: Kaslin
Stockman believes he was targeted because of his conservative activism. He was known for boldly opposing President Obama. He was a Congressional whistleblower on Obama administration corruption, with such actions as ... exposing President Obama’s payment to the Haqqani terrorist network in exchange for the release of Army deserter Bowe Bergdahl…

I think Obama, in addition to paying the Haqqanis, also let this guy go: Mullah [Mohammad Fazl] was held responsible by the UN for the massacre of thousands of Hazara Shias in Bamian* and Yakaolang between 1998 and 2001 during the Taliban rule in Afghanistan. ------- The best of both worlds for the Taliban Breitbart's The Conversation ^ | June 11, 2014 | John Hayward ____ * see destruction of Bamian Buddhas