Executive Councilors are contemplating a 50 percent increase to tolls on New Hampshire roadways – including the plaza on Interstate 93 in Hooksett – in order to fund an acceleration of long-term construction projects.

A proposal presented to councilors by the New Hampshire Department of Transportation on Wednesday would raise cash fees at the Hooksett tollbooth from $1 to $1.50, and EZ-Pass charges from 70 cents to $1.05. The Hooksett I-93 ramp, which currently charges 50 cents cash, would increase to 75 cents; other toll areas in Hampton, Dover and Rochester would increase by lower amounts.

The pricing scheme, drawn up at the request of Councilor Russell Prescott, R-Kingston, would bring in $36 million in additional revenue a year, the department said. The money would help to speed up a range of slated highway projects, including a long-planned widening of I-93 between Concord and Bow to reduce weekend congestion, according to the proposal.

Councilors voted Wednesday, 4-1, to recommend the proposal to Gov. Chris Sununu, in a non-binding vote at a meeting of the Governor’s Advisory Commission on Intermodal Transportation.

The department’s proposal includes a price control system that would give New Hampshire residents a capped number of exemptions, intended to lessen the impact. Unlike the toll increases themselves, those additional price rules would need approval from the Legislature.

Whether the price hike moves ahead depends on Sununu. The Executive Council has sole authority to approve toll increases in New Hampshire, but the governor can control whether that increase appears on the council’s agenda, giving him an effective pocket veto.

In a statement Monday, Sununu, a former councilor himself, suggested he would allow it to move forward for the council to decide, despite personal opposition.

“It is important to recognize that the 10-year highway plan as well as consideration of any toll increases has been legislatively tasked to the Executive Council,” he said. “Only in extreme circumstances do I believe that interfering with that process would be warranted.”

He added: “While I oppose toll increases, I respect the Council’s chartered responsibilities and have asked the councilors to consider holding an additional public hearing focused on allowing citizens to weigh in on this specific proposal.”

A spokesman was not available to clarify whether the proposed hikes qualify as extreme circumstances.

The proposed increases would be the first time systemwide toll fees were changed in New Hampshire since 2007.

In its proposal, the Department of Transportation presented the fee increase as a means to tackle long-standing projects, including a $122 million widening along the F.E. Everett Turnpike south of Bedford, and a $90 million reconstruction of I-93’s accident-prone Exit 6 in Manchester. Provided that the state secures a $50 million bond, the revenue could speed up completion time for many projects by years, according to department projections.

As for Concord, the department pointed to its plans to install an additional lane as a means to reduce traffic and encourage tourism. Driving data indicate that drivers stuck in Friday afternoon gridlock between Concord and Hooksett spend an average of 15 minutes’ additional travel time, wasting $5 per trip and creating an annual net loss of $1.6 million, the proposal states. According to department projections, the widening – estimated at $261 million – would be completed in 2027 with the price hikes, six years earlier than current estimates.

Speaking Monday, Prescott touted the ability to use the money for projects that have stalled, such as the approved construction of sound barriers along Interstate 95 in Portsmouth that had been unfunded for years.

“I’m leaning towards a yes on this,” he said. “I’m looking forward to more public input, but the position I’m in right now is I believe that we as a state would benefit more from shorter transportation, less congestion and less noise with a toll increase.”

Councilor Andru Volinsky, D-Concord, added that by creating additional toll revenue – which by law may be spent only on highway construction projects – the price increases would allow more Department of Transportation money to be used to pave local roads and fix red-listed bridges.

“The department (has been) pretty clear that New Hampshire cannot keep up with its infrastructure needs absent additional revenues,” he said.

“In Manchester, I heard loud and clear that we need to expedite the construction (around exits 6 and 7),” he said. “It’s a public safety concern.”

But Councilor David Wheeler, R-Milford, has taken issue with the timing of the proposal, arguing that it should have been pitched earlier than Wednesday, after which all scheduled field hearings had concluded.

The Executive Council is in the midst of nailing down a 10-year plan for the Department of Transportation to recommend to Sununu by the end of the year – a complex process that must necessarily take into account whether the tolls will increase before it can be completed.

Responding to criticism around public transparency, Prescott said he plans to host a hearing on the Seacoast sometime in the coming days.

Wheeler said he disagrees with the rush to complete the projects, as long as they get done on schedule. And he said he opposes the increases on a simple grounds: It would take from the pocketbook of daily commuters.

“This is just too much, too soon,” he said. “People’s incomes haven’t gone up 50 percent.”

I used to cheer when reading of residents leaving Massachusetts. New Yorkers and New Jerseyians are now flooding the state. It’s becoming Vermont.

Where do the toll money go to? Bike paths? Side pet projects? Why are tolls always increasing when there’s already federal and state gas taxes for roads? 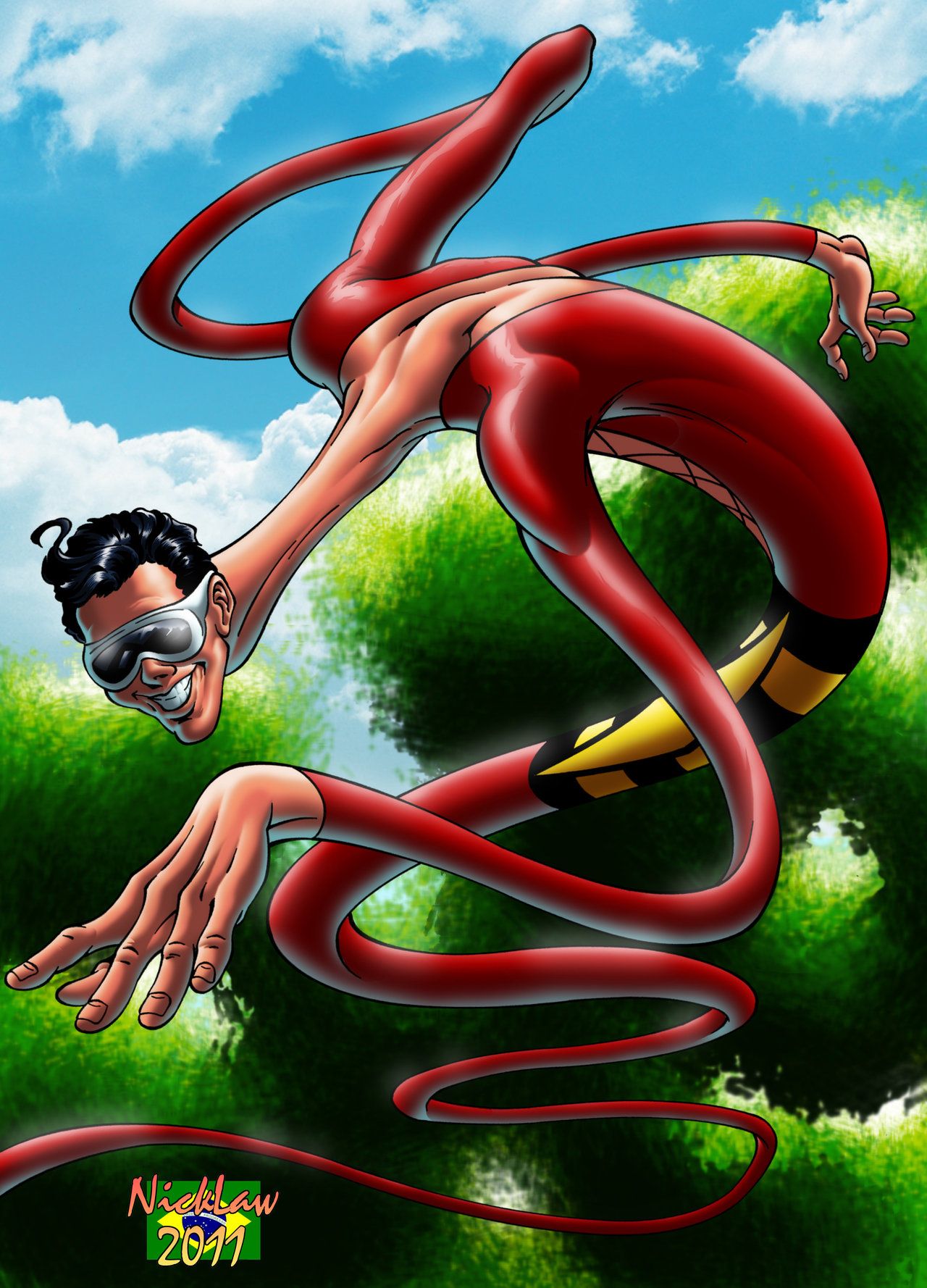 And you thought
Plastic Man was
a stretch.

WV tolls are way higher than that. I’m not sure how much it is now, but in the past I know we pulled out 2 $1 bills at each toll booth.

I know WV tolls were increased earlier this year as part of a revenue package designed to cover bonds that were just approved in referendum for road building.

My favorite comic character! I didn’t think anyone else remembered him!

The state of New Hampshire spends much of the toll revenue and gas taxes on Social services. They’ve been doing it for many years. Pet projects are also a favorite for taking funds from vehicle taxes.

I read the comic books as a kid and he was a favorite. Then Mad magazine came along and corrupted us all. LOL

we will suck up the income tax savings. It’ll never be missed

“During the creative process of the PLASTIC MAN movie, Warner Bros. tested one actor who was already familiar to the comic book world. That one actor was and still is very familiar with the term “plastic-y.” That actor was Jim Carrey.

Being one of the few bright spots of a rather poor Batman franchise in the early 90’s, Warner Bros. kept his name circled for a future project. Despite creative problems, other actors being rumored and over a 10-year wait, it appears Warner and the DC Cinematic Universe has finally found their Plastic Man.”

Then double again and again while roads and bridges never get fixed as the money is diverted to the state pensions.

Is someone going to step forward later & show proof that the money went precisely for what it was intended for? Yeah,right.

Of course ‘they’ think if you don’t like the new rates, don’t use the highway.

Just once I would love to see the people take them up on that.

Great Idea, fleece the sheep for all you can.

Of course when people start doing the speed limit and stopping for red lights, that new source of income basically dries up, ‘forcing’ the camera people to readjust the timing to get some more sheep to fleece.

‘They’ always say the devices are for safety not monetary.

If that is the case, just forget the money fines, just charge ‘points’ off the license and when so many points ‘rung up’ confiscate the tags and car if necessary.

Couple of confiscations and the ‘problem’ will solve itself.