The Brady Campaign trying to drag Starbucks Coffee into the anti-open carry debate is, like the core mission of the gungrabbers, senseless, punitive of the innocent and fundamentally unfair. The coffee giant just wants to sell its wares, and is reluctant to alienate a large market segment simply because anti-rights bluenoses get all hissy when they see anyone pushing beyond social norms they deem acceptable.

Some of us have been waving that denim flag for years--here's an early warning from Jews for the Preservation of Firearms Ownership:

Levi Strauss, the makers of the jeans we are so fond of buying, is taking your money and contributing heavily to PAX. PAX is an organization circulating a petition to broaden the reach of the federal government to disarm America.

And here's a letter from our friends at Montana Shooting Sports Association:

That you would so clearly favor the criminal class is a mystery to me, but until you recant your uncivilized ways, I will have to recommend that Montana gun owners and members of the Montana Shooting Sports Association to no longer buy your products. After a lifetime of wearing Levi's, I'm switching to something else.

OK, but that was years ago. Perhaps public pressure has made them see the light? After all, they're airing a commercial with a Walt Whitman poem narration:

COME, my tan-faced children,
Follow well in order, get your weapons ready;
Have you your pistols? Have you your sharp edged axes? Pioneers! O pioneers!

Inspiring words paying tribute to the American spirit, paradoxically written by a poet who socialists consider an icon, then cynically and commercially exploited here by social engineering globalist profiteers using a beautifully read voice-over by a communist actor.

Ah well--back to the point: Where does Levis Strauss & Co. stand today on your right to keep and bear arms?

Reader "Barney B" sent me copies of his email correspondence with the clothing giant. I'll give you the CliffsNotes version, from their corporate "consumer relations" reply:

Here's one of the ways they manifest their deep beliefs:

In this time of need, we encourage you to give what you can at www.oxfamamerica.org.

OXFAM? Where have I heard about them before?

Oh, yeah--they're the international citizen disarmament zealots who are conjoined with IANSA to stump for a global gun grab.

I won't waste your time asking you to send these creatures an email. I'll simply observe that giving them your business, especially when so many alternatives exist, is giving aid and comfort to a proven enemy of your right to keep and bear arms. Consider that when making your clothing purchases--and next time you see gun owners wearing Levis, let them know.

Haven’t bought anything from Levi’s/Dockers for ages and don’t intend to ever again.

2 posted on 02/06/2010 8:30:33 PM PST by smokingfrog (You can't ignore your boss and expect to keep your job... www.filipthishouse2010.com)
[ Post Reply | Private Reply | To 1 | View Replies]
To: Still Thinking
From the time I was in the first grade until about fifteen years ago, all I bought were Levi jeans. I also bought Dockers. I quit buying them when they announced they were pulling their charitable contributions to the Boy Scouts until they allowed homosexual scoutmasters.

Haven't bought a Levi product since.

I’ve been boycotting them since a homosexual agenda thing 20 or so years ago.

I won't waste your time asking you to send these creatures an email. I'll simply observe that giving them your business, especially when so many alternatives exist, is giving aid and comfort to a proven enemy of your right to keep and bear arms. Consider that when making your clothing purchases--and next time you see gun owners wearing Levis, let them know.

My Glock Model 27 40S&W wont fit in the back pocket on a pair of Levi’s anyway. So I suggest Wranglers.

IMHO, Levi Strauss and Starbucks are BOTH commie lib outfits and I won’t buy either one’s products.

American made (albeit union), only the best will do at this house...

Yep, a bit of lace in every pocket and some cool-aid in every cup. I won’t spend a dime, I mean a 5 dollar bill on their coffee and I shop for Wrangler jeans.

Not that I really care or that it matters but the link to the "communist actor" leads to a Wiki article on Will Geer who died in 1978. The voice on the commercial is clearly not Will Geer IMHO.

Wranglers and whatever khaki is on sale. Not Dockers.

I have some bad news. Carhartts and Wranglers are no longer American made.

We started noticing a different feel in the fabric and stitch. I decided to check the tag. Both brands are now made in MEXICO.

I visited their websites and the manufacturers are a little ambiguous in disclosing where their clothing are made. If you wish to purchase these brands (US manufactured) you’ll have to visit a thrift store.

If you’d like American made products that are similar to Carhartt buy Schaefer Ranchwear. 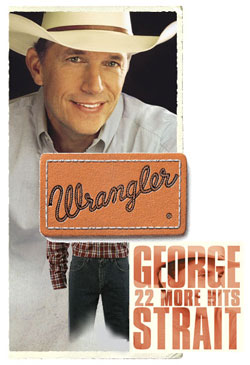 I doubt Mr. Strait knows where his Wranglers are now manufactured.

There’s something far more important to me than purchasing a product simply because a celebrity, albeit conservative, endorses the name. And that is to support American made products if at all possible.

We love George Strait. He’s the genuine article, but that jeans he’s wearing is no longer.

Whitman was a homosexual narcissist of the first order. Possibly only Allen Ginsberg was more off-putting.