(snip)The 39-year-old is an author and global health advocate. Tonight she will appear on The Graham Norton Show to talk about her and her mother’s book. But what mishap from a celebrity caused Chelsea to give a stern warning to her husband about how women should be treated?(snip)

But it’s not all marital bliss for the couple after Chelsea have her husband a stern warning.

In an interview with The Cut, the former first daughter revealed she and husband Marc had watched Beyonce’s concert film Homecoming that week.

After which she had started speaking about the now-infamous moment when Beyoncé FaceTimed Jay-Z to show-and-tell him how excited she is about fitting back into her costume after having given birth to twins.

But her husband Jay-Z seemed distinctly underwhelmed, uttering a simple: “All right”.

Chelsea told The Cut: “And I said, ‘Marc, if that’s ever me, you better have more enthusiasm.

“It wasn’t the “I’m so proud of you. That’s amazing” that I arguably think any woman deserves, particularly someone who has clearly worked herself body, mind, heart, soul, and spirit to get to that place.

“And I was like, “I bet every woman watching this has this sense of She deserves more enthusiasm.

“Marc was like, ‘I got it. Can we go back to watching it, please? We’ve talked about it three times in the last 90 seconds.”

Ms Clinton also revealed details about the struggle she faced reconnecting with her body and mind postpartum.

She told The Cut: “It’s my first time back home on the stage after giving birth.

“I’m creating my own homecoming and it’s hard. There were days that I thought I’d never be the same. 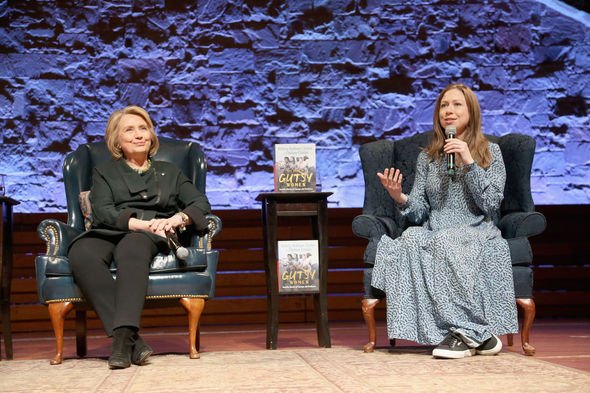 O, the trials of being a silver-spoon millionairess, who can't bring herself to care about money...

I see she inherited her mothers oratory skills...

How cute . . . Chelsea Clinton thinks we give a $h!+ about what she thinks.

I wonder how many ashtrays and flower vases lil’ Markie has caught with his face.

Somehow I have a hard time fathoming ‘marital bliss’ and ‘Clinton’ in the same sentence.

Recall that her husband ditched her for some time not long after they were married.

We recently had more than a few applicants who spoke in the same manner. There was even one time the guy said “like” 20 times in 60 seconds..and we counted it.

That’s why Clintoon husbands CHEAT because they realize married to a Hitlerite is like marrying Satan.

It would be akin to a wet dream for me to see Hillary run one more time. It’s on my bucket list to see Trump push her into the slime she came from one more time.

Yeah, because strong, independent women are crushed to the core of their soul without insincere, gratuitous praise about some trivial accomplishment from the men in their lives. ;p>Liberals: once again, a parody of themselves.

yes he has a seafood allergey

Chelsea and spouse are part of the Clinton Foundation pay to play criminal organization. They all should hang right next to each other.

Looks like she borrowed one of her mom’s tents for the event and a pair of H’s used tennis shoes.