In July there was even video proof that President Trump’s Twitter page is being censored.

In a video tweeted in July 2017 by user @RightlyNews, a tweet by @realDonaldTrump ‘unliked’ itself after the user ‘liked’ the tweet by clicking the heart button.

Strangely, the user clicked ‘like’ on two prior tweets by @AmericanVoterUS and @FoxNews with no ‘unlike’ issues.

The user ‘liked’ President Trump’s tweet a total of four times and it was ‘unliked’ four times. 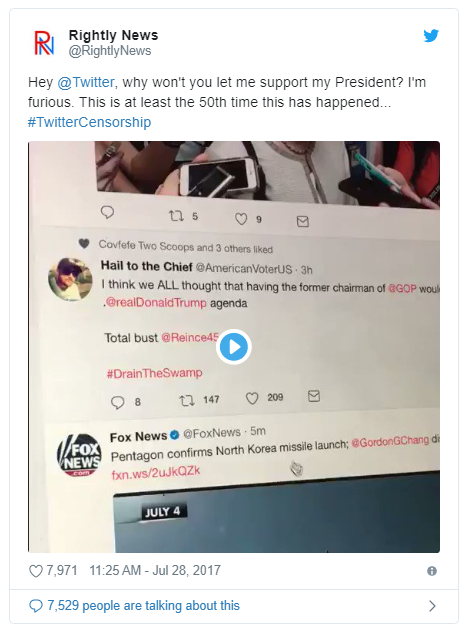 His is the only twitter I read, and I’ve noticed how they’ve PRIORITIZED our domestic enemies’ responses to his tweets.

They still don’t get how they’re pushing for his re-election, BUT their armies will be ready after he wins — again.

And Metro Police will stand down — again.

Trump’s twitter feed is the ONLY National news I trust.

Trump’s twitter feed is the ONLY National news I trust.

Trump’s been shadow banned for at least two years. I generally on see only retweets rather than his original tweet. Twitter will, sooner rather than later, ban the president outright.

7 posted on 09/30/2019 5:17:26 PM PDT by Steve Van Doorn (*in my best Eric Cartman voice* 'I love you, guys')
[ Post Reply | Private Reply | To 1 | View Replies]
To: ScoochDude
Well that's why Republicans were losing before Trump came along. They just did not get that "newfangled" Internet thing. That allowed Obama to clean their clocks.

President Trump has an awesome social media presence and that almost singlehandedly propelled him to his shocking victory in 2016.

In 2020, that social media presence will be even more awesome due in large part to Brad Parscale, Trump's 2020 campaign manager.

I read his tweets all the time. I go to twitchy or here. I just refuse to join the cesspool.

Thank you. I was wondering why NONE of my posts to #realdonaldtrump have been retweeted, liked or commented on (not that they deserve it but it does make me wonder). And when I go to see if any of them are in the ‘conversation’ I can’t find my tweets! In fact I don’t see ANY tweets of support to the POTUS..Just Trump haters by the thousands. I’ll keep tweeting, at least the people removing my tweets have to read them. (ha ha on them)

Twitter will, sooner rather than later, ban the president outright.

I wonder why they haven't already. You'd think if they were going to do it, they wouldn't have left it this close to the 2020 election.

12 posted on 09/30/2019 5:43:12 PM PDT by FormerFRLurker (Keep calm and vote your conscience.)
[ Post Reply | Private Reply | To 6 | View Replies]
To: treetopsandroofs
I was talking to a farmer in his early sixties the other day as part of my Census canvassing operations.

Saw his Trump 2020 bumper sticker, and commented on it.

He's a non-tech guy - but he has his smartphone.

Trump's army is listening to his Radio Free America broadcasts on Twitter.

I absolutely expect them to ban Trump as soon as the Rats have their candidate if not sooner. They will use the Election Campaign as cover, using the BS excuse that the POUTS has an unfair advantage. Bank it.

Great to hear, thanks for sharing.

This is oppression by algorithm.