Not that that has happened... but not this week!

Am I to understand...

Big and Impy, among others...

may want in on this--

Surprisingly, since I have Baker Mayfield as my QB, my fantasy team still managed to squeak out a win. On to Week 2!

Tampa Bay at Carolina 8:20 pm NFL Network Bank of America Stadium Rough season start for both these squads, rougher for the Bucs. But Carolina kept it close against LA, and I believe the home advantage puts them over the top here. Panthers.

L.A. Chargers at Detroit 1:00 pm CBS Ford Field Chargers picked up right where they left off last season (well, not exactly I do remember a bad playoff loss to the Pats...). And Matt Patricia's second season in Motown isn't looking any better than the first. Chargers.

Jacksonville at Houston 1:00 pm CBS NRG Stadium The Texans came up just short against NO but seemed to be able to move the ball at will in the second half. Nick Foles went down in his first game as a Jag. Not a good sign. Texans.

Minnesota at Green Bay 1:00 pm FOX Lambeau Field Two Week 1 winners meet! Home opener for the Packers and I do believe they will put up more than 10 points. But the Vikings.... who the hell knows? Packers.

Seattle at Pittsburgh 1:00 pm FOX Heinz Field Was that the real Steelers team that got throttled by the Pats Sunday night? Or was it just one bad performance? Seahawks squeaked by the Bungles; they'll need to do better than that this week. And they will! Seahawks.

Indianapolis at Tennessee 1:00 pm CBS Nissan Stadium The Titans stomped the Browns and I still don't see Andrew Luck in uniform for the Colts. Titans.

New England at Miami 1:00 pm CBS Hard Rock Stadium The Phish gave up 59 to the Ravens, not exactly an offensive powerhouse. And NE will put all the Antonio Brown brouhaha aside and concentrate on the job Sunday. Patriots.

Buffalo at N.Y. Giants 1:00 pm CBS MetLife Stadium Josh Allen continues to grow as a QB. The Giants? Well, Saquon Barkley can't do it all by himself. Bills.

Arizona at Baltimore 1:00 pm FOX M&T Bank Stadium Home opener for the Blackbirds and the Cardinals with Murray are very much a work in progress. Progress that will be stalled Sunday. Ravens.

Chicago at Denver 4:25 pm FOX Broncos Stadium at Mile High I don't believe the Bears are as bad as their opening performance. And I do believe the Broncos are just not very good. Bears.

New Orleans at L.A. Rams 4:25 pm FOX Los Angeles Memorial Coliseum The Game of the Week! No last second heroics will be necessary from Brees and the Saints this week. They'll win easily. Saints.

Philadelphia at Atlanta 8:20 pm NBC Mercedes-Benz Stadium The conventional wisdom loves the Iggles this season, and until proven wrong I'm going with it. Eagles.

Cleveland at N.Y. Jets 8:15 pm ESPN MetLife Stadium A team has to be happy when they look on the schedule and see the NYJ are up. Jets managed to snatch defeat from the jaws of victory in Week 1. Mayfield should be primed for a big performance (if he doesn't get sacked 10 times...) on national TV and with something to prove after a Week 1 turkey. Browns. 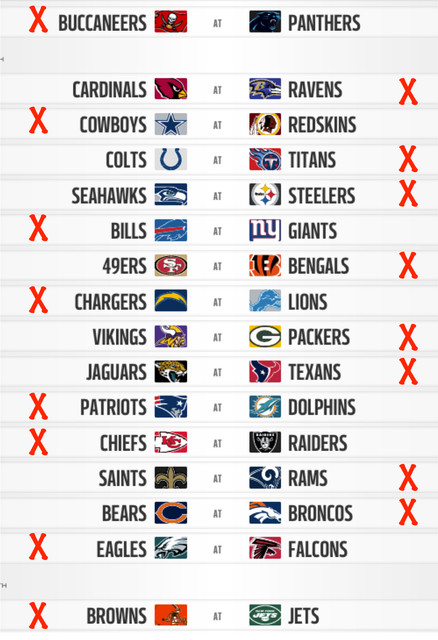 True. And they could well win a playoff game this year.

But going all the way? Some people have predicted they could.

Anyway, George Carlin is rolling over in his grave right now, weather delay!


Ok now for the rest of the sheet. I feel so bad BBG, but I just CAN'T take the Bears.

I seem to remember ChiSox is your passion.
Gonna be 4 hour game

Well here we go, make sure I entered your picks correctly. LTOWM, you still have time.

With all the injuries the Jets have, I'm changing my mind from the NYorker to Da Egos to win Monday Night--

My passion is the Cubs if they can make the playoffs.