What a disgusting piece of excrement.

CK was raised by a white family. He was confused about his racial identity and a SJW girlfriend converted him to Islam and the Negro grievance industry.

How does San Francisco councilman Kaepernick sound to ya? I think that is his first goal and then on to Sacramento. And Californians will vote for him.

That’s why they protest the anthem.

5 posted on 11/20/2017 7:00:03 AM PST by ifinnegan (Democrats kill babies and harvest their organs to sell)
[ Post Reply | Private Reply | To 1 | View Replies]
To: TigerClaws
CK was raised by a white family. He was confused about his racial identity and a SJW girlfriend converted him to Islam and the Negro grievance industry. Louis Farrakhan, at the Millions More Movement rally in DC, Oct 15, 2005: "...what Mao Tse Tung did was, he went to the cultural community, and they [Farrakhan spreads his arms beneficently] accepted his idea."... "Mao Tse Tung ... had a billion people whose lives he had to transform."..."the idea of Mao Tse Tung became the idea of a billion people, and China became a world power on the base of the culture and the arts community. If we had a ministry of art and culture in every city we'd create this movement [in the U.S.]." Yes, the Black Liberation Theology is Marxism in the cloak of Christianity.

Nothing Christian about it. But makes them tax exempt. From the Louis Farrakhan, Nation of Islam website, FinalCall.com...

We believe in a Black first philosophy and a Black Liberation Theology.

We don’t worry about the criticism.

We love all of those who labored in the Panther Party from the ’60s. Many are with us today."

Just one nugget from the Sacred Congregation for the Doctrine of the Faith, "Instruction on Certain Aspects of the ‘Theology of Liberation': "...it would be illusory and dangerous to ignore the intimate bond which radically unites them (liberation theologies), and to accept elements of the marxist analysis without recognizing its connections with the (Marxist) ideology, or to enter into the practice of the class-struggle and of its marxist interpretation while failing to see the kind of totalitarian society to which this process slowly leads."
--Joseph Cardinal Ratzinger, Prefect, now Pope Benedict XVI; written in 1984

Understanding that black liberation theology is Marxism dressed up to look like Christianity helps explain why there is no conflict between Cone's "Christianity" [i.e. 'reverend Wright's thing] and Farrakhan's "Nation of Islam." They are two prophets in the same philosophical (Marxist) pod, merely using different religions as backdrops for their black-power aims.

God has a good plan for Colin, should Colin decide to seek God Him. In the mean time it doesn’t seem Colin is scoring any brownie points.

Sounds like Biden has competition for the 2020 nomination. And, as far as I know, there are no pics of Kaepernick fondling underage girls. So Biden could be in trouble unless Ds can “move past” the current sex abuse concerns (which I expect to happen once the Moore election is over). 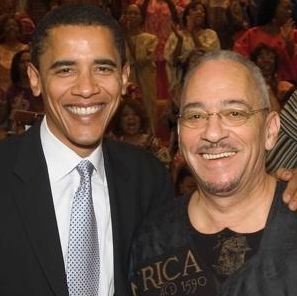 "Obama did not address the [Rev Wright] issue squarely until forced to justify his relationship with Wright, his pastor at Trinity United Church in Chicago, for over 20 years. In a speech several weeks ago, Obama denounced Wright’s comments but justified them by saying that America didn’t really know Wright. Obama’s connection to the pastor runs deep, as he titled his second book, “The Audacity of Hope,” after a sermon Wright gave. Wright also baptized Obama and his children as well as performing the marriage ceremony of Michelle and Barack Obama."

From "45 Communist Goals", as per "The Naked Communist," by Cleon Skousen:

#27. Infiltrate the churches and replace revealed religion with "social" religion.

how to the BLM folks reconcile Slap-ur-d*ck’s half-white side?

Give them an ultimatum. All together, all America-haters move to the country of their choice: cuba, venezuela, zimbabwe, or north korea. No possibility of coming back. No further contact with this country.

18 posted on 11/20/2017 7:40:51 AM PST by I want the USA back (Cynicism may just keep you from going insane in a world that has chosen its own demise.)
[ Post Reply | Private Reply | To 1 | View Replies]
To: I want the USA back; All
Give them an ultimatum. All together, all America-haters move to the country of their choice: cuba, venezuela, zimbabwe, or north korea. No possibility of coming back.

Communist movement, very much alive and well today, has been at this for 75 years or so, always looking for an opportunity to exploit. "The RCP upheld the 1992 sometimes-violent unrest in Los Angeles and nationally as a "rebellion" in the aftermath of the Rodney King verdicts.

Then-LAPD chief Daryl Gates alleged that the RCP was involved in the "riots".

Los Angeles has long been one of the RCP's larger and more active branches.

William "Mobile" Shaw was a local leader who recently passed and received public commendation from the party."