The former captain of the boat from which actress Natalie Wood drowned in 1981 alleged on TODAY Friday that her husband, actor Robert Wagner, was responsible for her death.

Dennis Davern said he is now urging homicide investigators to look into Wood's death. She had been boating with Wagner and his "Brainstorm" co-star Christopher Walken near Santa Catalina Island off the coast of California when she drowned.

"I made some terrible decisions and mistakes," Davern told NBC News' David Gregory. "I did lie on a report several years ago."

He added, "I made mistakes by not telling the honest truth in a police report."

When pressed by Gregory, Davern said he believed Wagner had intentionally kept the investigation into her death low-profile. And when asked if he thought Wagner was "responsible" for Wood's death, Davern said, "yes, I would say so. Yes."

Wagner's publicist issued a statement saying his family supported the L.A. County sheriff's department "and trust they will evaluate whether any new information relating to the death of Natalie Wood Wagner is valid, and that it comes from a credible source or sources other than those simply trying to profit from the 30-year anniversary of her tragic death."

Many of the details he shared have appeared in the book "Goodbye Natalie, Goodbye Splendour," authored by Marti Rulli. That book was published in 2009.

Reminds me of an old joke from that time...

What kind of wood doesn’t float?

NATALIE WOOD AS MARIA IN WEST SIDE STORY 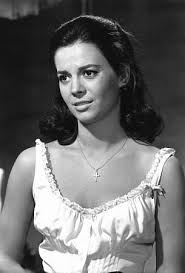 Here’s the latest story of how she did:

On the night of Wood’s death in November 1981, Wood and Wagner got into a “terrible argument” that was never reported to the original investigators, according to Rulli. Actor Christopher Walken, Wood’s “Brainstorm” co-star, went to sleep in his cabin after an angry Wagner smashed a wine bottle on a coffee table that sent everyone scattering to avoid the flying glass, Rulli said. Walken has not made any comment since these new details emerged, other than the statement from his publicist Friday.

When a “mortified” Wood went to her stateroom, Wagner followed and an argument began, according to Rulli.

“Dennis made an attempt to stop it, and was told to go away by Robert Wagner,” Rulli told Gregory. “Then minutes later, Natalie was missing...Dennis wanted to do everything. Make a phone call, turn on the search light. His instincts told him something was terribly wrong, and Robert Wagner asked him not to.”

The coroner’s report from the time of her death indicated that she may have slipped and hit her head after she lost balance from drinking several glasses of wine.

I have always wondered what happened to her that night.

I’ve heard RJ even say that Natalie would not have gotten into the dingy on her own as she was afraid of the water. Plus it was dark out. Of course the craziest man in Hollywood was on the boat but that’s just a coincidence.

The news reports of her death at that time sounded incomplete and fishy.

Fall overboard, it’s the easiest murder to arrange of them all. It happens all the time. You might even fall off in the middle of the ocean. The novelist in me just can’t resist mentioning this. It’s absolute grist for the fiction mill, and there’s no reason why not in real life.

Or the old joke... Why didn’t Natalie take a shower on the boat? She figured she’d wash up on shore.

Another one: Why didn't Natalie Wood take a shower the night before she died?

She figured she would wash up on shore the next day.

Dittos. I always felt that there was a coverup in that case, and that Robert Wagner knew a whole lot more about her death than he was saying.

Truly a tragic loss. Natalie Wood was clearly one of the most beautiful women...inside and out...ever to walk this planet.

One of the greatest movies, ever...

So we now have established that he's a liar. The next question is “what makes me think he's telling the truth now?”

The captain did it in the red room with a candle holder.

What did Robert Wagner say to Natalie Wood the night she died?

“OK honey, you can have a drink, but don’t go overboard!”

The coronor said that she “wreaked of alcohol”. I remember that from back then.

18 posted on 11/18/2011 10:19:26 AM PST by LibLieSlayer ("Americans are hungry to feel once again a sense of mission and greatness." Ronaldo Magnus)
[ Post Reply | Private Reply | To 4 | View Replies]
To: SeekAndFind
From the Amazon blurb: "Goodbye Natalie, Goodbye Splendour is the result of a decades-long investigation by journalist Marti Rulli and Dennis Davern, Natalie's friend, confidant, and captain of the Splendour on that controversial night."

And here is an interesting quote from Davern:

"Why now is because I've been trying to tell information about this for many, many years, but there wasn't really anyone listening until now," he said. "I've been trying to get somebody to listen for a long time and now somebody is listening and they're going to carry on with this investigation. I'm not saying anything different. All the information that I've revealed in the past, it's all in that book, and now it's just up to the investigators to do an investigation."

Hey Cap'n, all you had to do was head down to the L.A. County Sheriff's Department and say "hey guys, I lied on that report about Natalie Wood'ds death" and they would have been re-investigating this thing a LONG time ago.

Because they're media whores just like you are. It's Hollywood, remember?

The yacht was at the isthmus of Catalina Island. I have been there in the summer and went swimming from a sail boat. The currents were strong and carried me pretty far from the boat. I was not drunk and I am a good swimmer, but it took an effort to swim back to the boat. I can understand how somebody who is drunk and in that water on a cold dark November night could drown. Also, she was wearing a thick coat that got soaked. I think she drowned.