Ok, so, what else would we expect from the New York Times, right? Right. Still, the headline that ran with an op/ed piece by the corrupt newspaper’s inept economist, Paul Krugman, betrayed a desperate effort to plumb new depths of journalistic malfeasance by the newspaper of fake record:

I couldn’t tell you what Krugman says in his latest bit of lame-brainery because it’s behind the Times’s firewall, and we here at Today’s Campaign Update are not in the habit of lending monetary support to the faking of America’s news. But let’s be honest: Nothing Krugman has to say is worth noting anyway. After all, he’s the circus clown who predicted that the election of Donald Trump to the presidency would bring about the total collapse of the U.S. economy, a collapse from which America would “never recover.”

It’s fair to note that Krugman and the Times were not the only corrupt fake journalist/fake news outlet to disgrace themselves on Thanksgiving. Jessica Kwong, a fake reporter for the on-life-support Newsweek – which no longer can afford to exist as a real magazine but still fakes the news in the digital space – issued a tweet early on Thanksgiving that said:

But later in the day, news broke that President Trump had in fact flown out to Afghanistan in the wee hours of the morning to make a surprise visit and spend Thanksgiving with U.S. military personnel at Bagram Air Field. There he not only dined with the troops, he actually served them their dinner, laughed and joked with them and just generally enjoyed a rare chance to be with real Americans and the troops he loves and supports:

President Trump in Afghanistan for surprise Thanksgiving visit to US troops. The President left his Mar-a-Lago home in secret & flew overnight to visit US troops for an unannounced holiday visit.

Jessica Kwong ✔ @JessicaGKwong Trump headed to Afghanistan to surprise U.S. troops on Thanksgiving https://www.newsweek.com/trump-thanksgiving-plans-maralago-1474518 … Deleting this tweet because it was written before knowing about the president’s surprise visit to Afghanistan-an honest mistake. Story has already been updated, as shown in the screenshot.

View image on Twitter 3,637 6:22 PM - Nov 28, 2019 Twitter Ads info and privacy 12.4K people are talking about this An “honest mistake.” Yeah, sure, right, uh-huh. That’s an interesting way to describe going to press with a completely false story with zero sourcing or journalistic process in just another corrupt effort to do harm to the President’s reputation. In today’s 100% dishonest, corrupt media, there is no such thing as an “honest mistake.”

Kwong’s humiliation led to the creation of this sterling Twitter meme:

To be honest, I don’t remember a time during my 60+ years on earth when Newsweek was a reputable news source, but I suppose it might have been the case before I was born. In any event, it and the New York Times have certainly surrendered all pretense over the last four years.

If true, isn’t Krugman that little dwarf who rides the NYC subway trains at night, doing crossword puzzles, dressed in only a raincoat?

Charles Payne on twitter is reporting that journalists were preparing or reporting stories and tweets about the president playing golf in Florida on Thanksgiving and then scrambling to delete them.

And Krugman has some evidence for this, right?

Out of all the thousands of people President Trump has employed over the last few decades, how is it that not one has come up with any claim of racial discrimination?

If such a complaint had ever been filed with EOE, it would be the headline and wall to wall for months.

7 posted on 11/29/2019 9:15:54 AM PST by jazminerose (Adorable Deplorable)
[ Post Reply | Private Reply | To 4 | View Replies]
To: miss marmelstein
Charles Payne on twitter is reporting that journalists were preparing or reporting stories and tweets about the president playing golf in Florida on Thanksgiving and then scrambling to delete them.

Here's another one who jumped the gun. 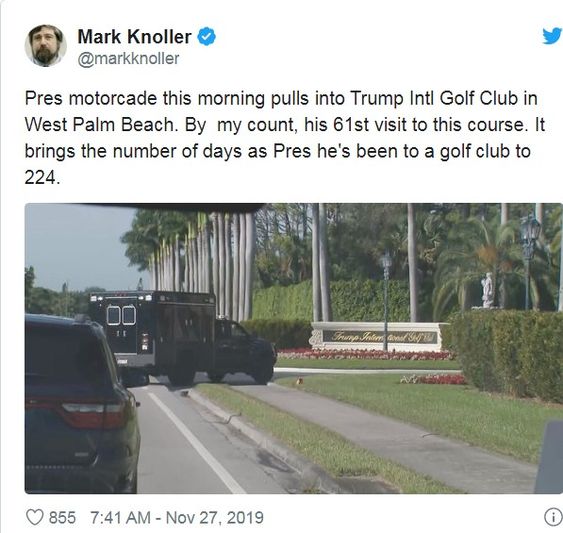 The Newsweak story was no “honest mistake”. It might have been if the author actually had information that Trump was spending the holiday golfing, but she did not, she simply took her assumptions to print and got burned for it. That isn’t an honest mistake, it’s a lie.