Despite arguably the most popular woman in pop-music pushing for her opponent, Republican Marsha Blackburn has won her Senate race in Tennesee.

Pop-star Taylor Swift pushed for former Democrat Governor and current Senate candidate Phil Bredesen in early October, but to no avail. Apparently, the blue wave couldn’t overcome the red wall in Tennessee as Blackburn has walked away with the victory according to Fox News:

With 32 percent of precincts reporting, Blackburn had garnered a whopping 62 percent of the vote, compared to just 37 percent for Bredesen.

This isn’t just a small victory either. Blackburn ran away with this victory against Bredesen. This distance has been widening for some time, oddly enough, since Swift backed Bredesen.

Perhaps those in pop-culture aren’t as influential as they thought.

Big congratulations to Blackburn, and the people of Tennessee.

TOPICS: Government; Humor; Politics
KEYWORDS: marshablackburn; reidhoffman; taylorswift
Taylor Swift getting involved with this made no sense to me until later that day when I saw commercials on youtube for a Music Awards show THAT NIGHT featured Taylor Swift as the star.

It looks like she just did it to prime the Trump haters at the show/watching the show, to receive her positively.

Swift also waited until the American leg of her tour had ended before making an endorsement. Wouldn’t want to depress ticket sales, you know.

Word on the Streets of NYC is that T Swift has changed sides in the love wars. Evidently, she is quietly playing the entire field. So, she is under some peer pressure to come out as a deep lib.

But that is none of my business.

I’m a big Taylor Swift fan. Love the arrangements. I listen on Pandora all the time. However, since her announcement, every time one of her songs comes on, I give it “thumbs down”.

They log this stuff. It makes a difference. I’m pretty sure I’m not the only one.

They need to stick to entertainment and stay out of politics.

Don’t know about Swift other then what she does. Dems do not win outside of Davidson and Shelby county areas

Taylor Swift was the best thing Phil Bredesen had going for himself.

And he only succeeded in rubbing off his tarnish on Taylor Swift.

I don’t mind that Oprah kind of got pushed to side stage, either. Influence should not be spent so foolishly.

Agreed. People are tired of being lectured by hypocritical celebrities.

Never heard her sing. Not once.

Maybe some “crakers” who might’ve been kicking around the idea of voting Rat had second thoughts when Oprah pulled out the “L word” — “lynching”. White folk are sick and tired of that crap!

Her voice is pedestrian. Her lyrics can be juvenile (but are getting better). The thing that makes her songs is the music and arrangements. As a musician myself, that is one of my pet peeves regarding music.

But it’s irrelevant now. There’s plenty of music out there. I can do without her.

You can also add to that the sad “Concert for Gilliam” that Jimmy Buffet put on in Florida. That can’t help him with his “Country” fans he has appealed to in the last decade! 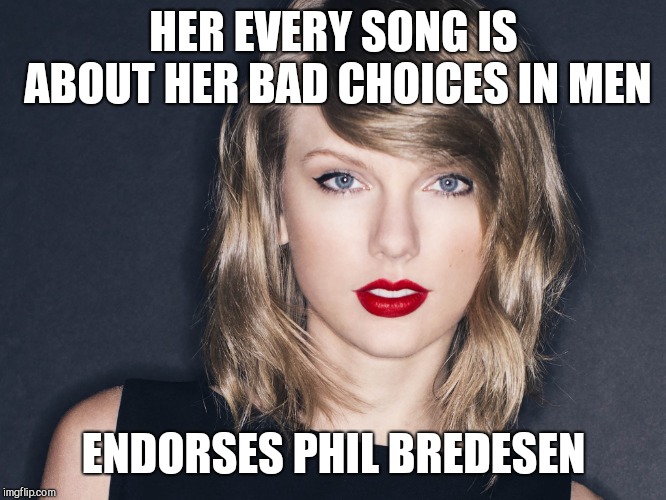 If you look at the timeline, Swifty make endorsement and then Marsha’s poll numbers start rising.

Swifty Swiftboated herself, while Marsha started packing her
wardrobe to got to the Senate.

Thanks Taylor. How to diss half your fans in 30 seconds should be your next show.