This letter explicitly states that AG consulted THE WHITE HOUSE before making the conclusion not to provide Nunes with what he was seeking. 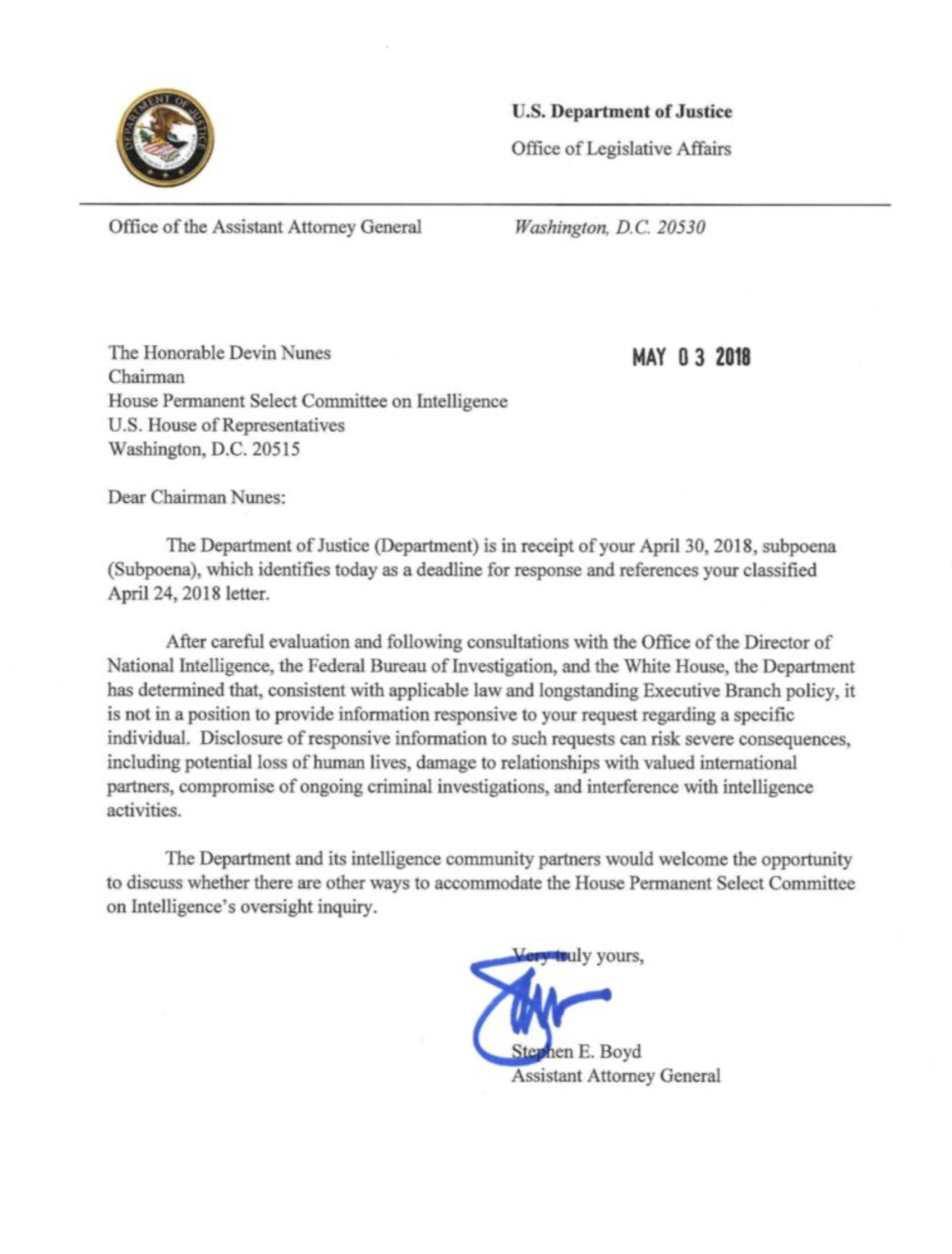 The sealed indictments list is now up to 28,937. Anyone still think Sessions is doing nothing at all? 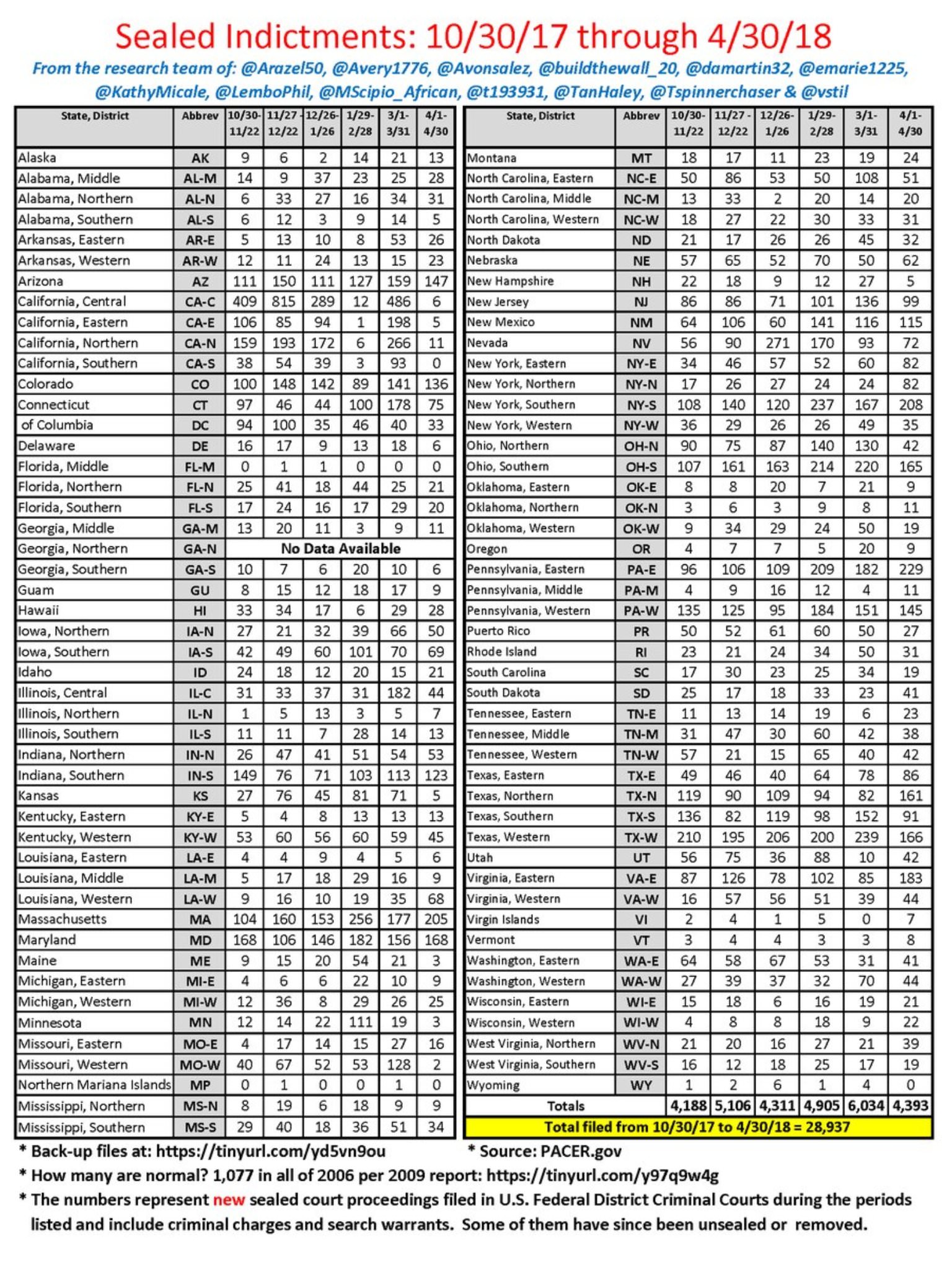 Congressional oversight is a constitutional duty. Just because they throw out the national security flag I’m not impressed .... neither were the the judges

Sealed indictments for what?

I’m going to go out on a limb and state that Nunes knows more than you.

The reason Sessions doesn’t go before the camera: “I know nothing, I see nothing. Must not be nothing. “

110 posted on 05/06/2018 11:42:50 PM PDT by taxesareforever (Islam is an ideology. It is NOT a religion.)
[ Post Reply | Private Reply | To 1 | View Replies]
To: GYPSY286
Two problems with that:
1) It doesn't matter whether Congress is a leaking cesspool. That leaking cesspool has a Constitutional mandate to perform oversight, and no "conservative" should be arguing that any Federal agency should be above that.
2) DOJ/FBI are refusing to reveal information that has NOTHING to do with any ongoing investigation or with revealing NatSec sources and/or methods. Most of what DOJ has refused to turn over to Congress or refused to unredact has turned out on subsequent examination to be embarrassing to DOJ or FBI.

Drunk, stupid and a fool is no way to go through like, Extremist.

Sessions is weak. Caved in early and never regained control of Rosenstein and Mueller, which any smart AG would have done immediately.

Rosenstein is a “Deep Stater” and perhaps the most dangerous one of all since he runs the whole Mueller investigation of god knows what.

I’ve known or worked under a few AGs in my time and Sessions is weak. Rosenstein is the enemy as were Lynch, Holder and Reno (the sellout in the mafia-controlled LIUNA assets seizure case (SDNY), 1990’s.

The rot is deep in DOJ, like millions of termites eating away at the foundations of American jurisprudence.

Session was not even close to being a Terminex man.

I don’t subscribe to your theory at all. If Sessions is cleaning the deep state out, he would have no problem turning over the documents requested by Nunes.

I think Sessions is doing things in secret, and will keep them so. At best - at the very best - he is an Institutionalist who is devoted first last and always to his precious institutions, not to the Constitution and We The People. I suspect he fears the supposed chaos that would result if we knew the true extent of the corruption in the Federal apparatus, and wants to keep us in the dark forever. (Some of us know.)

At worst, Sessions is an establishment Trojan Horse, either bribed or blackmailed or otherwise threatened into doing as the Swamp dictates. As 1 of 100 Senators, he could safely play the role of gadfly, as Cruz and Paul have so often done. None of them has succeeded in turning the Senate back to a more Constitutional governance. (Anyone who thinks Sessions is immune to such coercion is too naive to be opining about these matters. John Roberts was conveniently turned, and Antonin Scalia was conveniently eliminated.)

Sessions unnecessarily re-upped unConstitutional Asset Forfeiture, did he not? He gratuitously eulogized the unconscionable persecutors (not prosecutors) in the Cliven Bundy trial, did he not? I do not trust him or his judgment.

If those vaunted sealed indictments do not include felony indictments of both Hillary Clinton and Barack Obama, and if they both are not first tried and then convicted, then we most certainly have a multi-tiered (in-)justice system, and Sessions will have been shown to be a traitor to his Oath. (I do not believe that either will go to trial, much less to prison.)

Congressional Oversight is not an option - period! You Sessions sycophants rave about him following rule of law when it suits your purpose, then ignore it when it does not. He is unarguably flouting Constitutional separation of powers. Devin Nunes has authority here, whether you and your 3.14159D Chess like it or not!

You all commit a basic error: the assumption that he only had two either-or options. He could have taken many approaches these past months, and some of those would have involved more genuine respect of rule of law and more transparency with the electorate.

As others have pointed out, the bureaucrats are 90% Democrat/Uniparty. Sessions may be keeping things from us, but not from them.

Thank you for that.

The Sessions sycophants invoke Occam’s Razor even as they violate it: building one supposition upon another in order to create the fantasy they require for these apparatchiks to be in reality so-called white hats.

These people have been Clinton cronies for decades. They have not changed.

That is indeed food for thought.

All you need to know about Rosenstein is, he was confirmed 94-6. He was the Swamp's choice!

Credit to EEE for putting it all on the line and giving an end date. He says the hammer will drop before June 01, 2018. No excuses.

Will you put it on the line like EEE did and give an end date?

Maybe the sealed indictments are for smoking pot:)

I agree with your assessment. Congress is full of enemies of the state, and to unearth Sessions work to Nunes’ committee is to forward it directly to the NYT or CNN. Then, people die, relationships between countries get broken, assets lost. While I appreciate Nunes’ doggedness, I think he needs to have a PRIVATE briefing. Can’t have Shiff see all this stuff.

I also view the first part of the responses (haven’t made it halfway down the first page of ‘em yet) a significant sign that FreeRepublic just isn’t what it used to be.

FR used to be WAY on the cutting edge. I barely come here anymore. It’s still on my start tabs, but there is too much brilliance on Twitter, and too much knee-jerking over here.