From the size of it it must be a burro burrow.

If Nunes has wrecked the whole shebang, how will EEE emerge triumphant in 25 days?

Wouldn’t it just be over now?

Victory of prediction/analysis could be declared tomorrow. 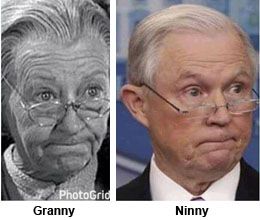 64 posted on 05/06/2018 7:16:18 PM PDT by LostInBayport (When there are more people riding in the cart than there are pulling it, the cart stops moving...)
[ Post Reply | Private Reply | To 1 | View Replies]
To: Extremely Extreme Extremist
What makes you think Sessions is "doing nothing?"

Because Session said that he was going to do nothing by recusing himself.

Nunes is a Trump insider. He's not screwing things up, and I've not heard one negative word from Trump about Nunes.

As I’ve stated from the start i’m going with Session’s.

Welp, with that I must stand aside and let the master proceed.

I just wanna hear that the donkey gets rescued.

Apparently you aren’t paying attention. Both Sessesions and Tosenstein have been dragging their feet in responding to subpoenas

Get current before you spew anymore falsehoods

-——I, FWIW, think Sessions recusal now will allow him to prosecute later.-——

Congress wants documents it is entitled to. Sessions responds that they are not entitled. Hence the problem.

Representative Devin Nunes, a man of tremendous courage and grit, may someday be recognized as a Great American Hero for what he has exposed and what he has had to endure!
11:08 AM - Feb 5, 2018

I hope you are right, and I shall give him and you the benefit of the doubt.

You must be too young to remember Ed Meese

Are you talking about the 4 dimensional chess Sessions is playing?

Me too, but I fear it will land with a thud. The MSM will ignore it, no one will get prosecuted or even fired, and dems will simply respond with their own version which 1/2 the country will believe.