About 30 years ago, I come across the article pictured above.   It is the start of an article in The Slave's Friend, a pamphlet published by an Anti-Slavery abolitionist society out of New York City.    The article is informative in a number of ways.

At first glance, the words  "The Slave's Friend" and "Bowie Knife" bring together the idea of an armed slave being able to resist oppression.  That actually was the case in Texas, upheld by the Texas Supreme Court in Cockrum v. State in the antebellum South in 1859.   The case, cited in both the Heller decision and the recent Peruta decision out of the Ninth circuit, showed that being armed was an absolute right under the Texas Constitution of 1845, and that even slaves had the right to bear arms in Texas.   While the court ruled that knives such as Bowie knives were especially dangerous and deadly, it also ruled that legal sanctions could not be imposed on their possession or carry, unless the person possessing them used them for an illegal purpose.

Texas was alone in such protections for slaves in the South, however, and the pamphlet was likely written before 1840, when Texas was still an independent republic.

A closer reading  illustrates that even in the antebellum United States, there existed a small number of people who had moral objections to the possession of weapons.   This objection derives from the "progressive elite" theory of crime.   It is interesting that the organization was centered in New York City.  From my recollection of the full pamphlet, the writer expressed particular umbrage to the words "Death to Abolition" that they proclaimed were on some of the blades for sale in New York City, and which they placed on the depiction of the blade illustrated in their pamphlet.

The pamphleteers were involved in the combat of ideas, not in physical combat, so it seems unlikely that they considered that their activities would one day lead to the greatest amount of bloodshed ever experienced by the United States, the Civil War, or if you prefer, the War Between the States.  I suspect that the pamphleteers would have been horrified if you had suggested to them that this would be the result of their efforts.   Many people hoped that slavery could be ended by non-violent means.   In some countries, such as Brazil, it was.

I only hope that a similar short sightedness is overcome by those who are attempting to inflict a degree of slavery on the entire United States by disarming the citizens.  It appears that the same blinders are covering their ability to look at historical examples.   Weapons owners in the United States believe that they are on the side of right, every bit as much as the abolitionists did in the antebellum United States, but we are not a small minority,  We are well on our way to becoming a majority, and we have the Constitution on our side.

©2014 by Dean Weingarten: Permission to share is granted when this notice is included.
Link to Gun Watch

Thinking that people need to take responsibility for their actions is typical of republicanism.

Progressives have never evolved past the caveman mentality.

I remember my Father was on a Walton County, Fl jury in the late 40s or early 50s.

A Black man was on trial for carrying a concealed weapon, a knife. He showed the jury how he used the knife to open cans and he kept it with his spoon and fork. He was a hobo.

Now Daddy and probably all the other men would have been considered racists by today’s standards but they also had no reason to harass an innocent Black man. They found him not guilty.

There is far more to the story than just this.

In John Brown’s efforts to foment a slave rebellion, figuring that training slaves to use guns would be expensive, difficult and less than effective against those raised with their use, he commissioned a blacksmith to make 950 pikes, that were described at the time as Bowie knives mounted on 7 foot poles, which Brown had designed, based on a Bowie knife he had taken from a Missourian.

Importantly, Brown was counting on the slaves being so full of savage rage that they would use their pikes to massacre all who resisted.

This demonstrates the strength the Bowie knife had on the public consciousness at the time. Possibly some comparisons could be drawn with how “assault rifles” are described today, by those ignorant of them.

John Brown was insane. Just about all his relatives were insane. In Eastern, Kansas he murdered a slave holding family including young boys and chopped their bodies into pieces.

I cannot believe the errors all through that little propaganda piece. 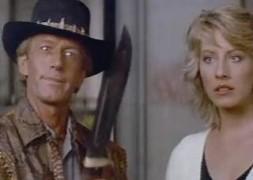 Do I really have to say it?

“I cannot believe the errors all through that little propaganda piece.”

They were the “progressives” of their day...

A little off subject: Jim Bowie’s knife was made by a knifesmith named James Black in Washington, Arkansas. Otherwise known as an “Arkansas Toothpick”.

Bowie was one bad dude.

What would patch wearing David Bowie of Diamond Dogs have to say about a knife like that? One of our detecting forum members found an original frontier one with an ivory (whale?) handle in an old tool box he bought for a buck or 2 at a damn yard sale. THAT was killer luck.

A coworker is really into knives, (altering/making) and he also had a 3 or 4 foot slab of wooly mammoth tusk from his father. He also came across an ~50 year old Bowie blank never completed by his father. I pestered him for a couple years that he should make that Bowie with an ivory handle, he finally did, it was awesome, and later he sold it to me for $400 and I gave it to Pops :-)

Great stuff, I also used to collect sheath knives, and still have them.

Something that I would like to have is one of the (not for public release) videos of the Bowie knife training that Bill Bagwell was giving to Army Special Forces, years ago.

Having one of his hand made versions of the Hell’s Belle would be nice also.

Our farrier is really good at knife forging, my wife gave me a fine Damascus blade made by him with a manzanita burl handle. It’s way cool and goes well with my pair of 1858 New Army Remingtons.

I agree completely that Brown was a homicidal maniac.

Though it is interesting to note how powerful the Bowie knife was in the “collective consciousness” in both the South and the North. This began in 1827, at the notorious Sandbar Fight, which even in retrospect, was one hell of a fight.

So though northerners, southerners, and even blacks saw the knife from different perspectives, it was seen as the weapon to have in a brawl.

I actually prefer The War for Federal Supremacy.