ON that happy note, I will leave with a porpoise...and Qatz! 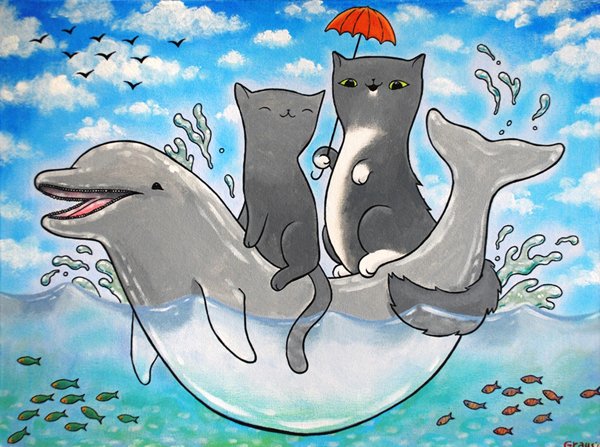 I’m sorry I copied it now. I only did so people would see what kind of “stuff” was being spread around, more or less in the name of “Q” related info.


I read and knew you didn’t think much of it. Highly doubted it in fact.


I mostly have had a wonderful day thinking of how the Mueller report sunk the derps boat. But it seems that for some reason, today of all days, there was a rash of insane theories being bantered about.

Now more than ever we FreeQs need to remember that the anons and groups like us are the news now. We don’t need to give the derps any new wild conspiracy theories ammo to accuse us or Q with.

It was a good victory today. There is so much more that has to happen. Q said, “we have it all.” Even so, like in a chess game, it has to be played right, and I think the Trump team will do so. But we sure don’t need to interfere and make it more difficult.

I hope he picked out china.

Well I just chanced on the twitter post.....but was curious who they were....ends up they’re pretty active opposing Trump....but then I saw them boast that Q had failed trolling them....so I just thought some would have a go at calling in their promises.

Looks terrific! ThankQ. I added it to the table. :)

HC&M not defined in the constitution. So it basically is whatever the House says it is.
Would the public stand for it ? probably not, but in a country that's this divided ? 50-50 would be enough for the House to take a shot.

I agree with Cletus...and I understand what you are saying, but there is no normal anymore.And I don't trust RATS. No honor anymore.

Look to Nixon for guidelines... cause the RATs will.
SCOTUS forced Nixon to give up documents.
Three articles of Impeachment
- obstruction of justice - (any stretch of the imagination that may come out of the Mueller report details ?)
- abuse of power - (calling for a National Emergency on the border ?)
- contempt of Congress - (anything they can think of ?)

It could go sideways quick if MSM bails on the RATs for this effort.
Bottom line ? The RATs will not stop the persecution of this President.

Yeah, I know who they are, Twitter’s inbred brothers.

A pox on “her”?
You will might want to rephrase that.

Not to worry, as soon as I heard the language, I clicked off it. The guy has to be a total nutter.

So how did they came to that conclusion...seeing that the server was locked up by the DNC..?

FTA:
...
Think of it this way: Yes, Russians tried to tip a presidential election, especially through hacking into e-mail systems. They even tried to help Trump.

Yet Mueller, after conducting the most exhaustive test ever of election integrity, reached this stunning conclusion: “The Special Counsel did not find that any US person or Trump campaign official or associate conspired or knowingly coordinated” with Russians “despite multiple offers from Russian-affiliated individuals to assist the Trump campaign.”

No American — not a single one — took the Russian bait. And that includes every member of the Trump campaign.
...
We now know that Hillary Clinton and her supporters misled the country in claiming that the White House was stolen from her. She started the Russia, Russia, Russia hoax and her claims, aided by the Obama White House and magnified by a thoroughly partisan media, set in motion a wild-goose chase.
...

CTH is going to break down the AG Barr Principal Conclusion notification letter against more than three years of background research. Yes, more than “three years“, is the correct time-frame here. The origin of the DOJ/FBI operation against Donald Trump goes back to 2015; the Mueller probe was a 2017 concluding chapter in the seditious conspiracy effort.

I’m going to cite as much background as possible; however, this review encompasses so much granular history that some parts might be too complex for a person who only recently jumped into the story. Disclaimer: this outline does not fit the narrative from those who claim Mueller and Rosenstein are honorable men. They ain’t.

The first part that matters is a few paragraphs into the letter. Here we find the scale of the investigative group, and a description of some of the investigative paths they traveled:
...
Team Mueller intentionally tells AG Barr they cannot make a determination of obstruction, and thereby force Barr to make the decision; and make it look political.

The obstruction angle was always what Team Mueller were working to deliver, in collaboration with their democrat political allies.

In my opinion it’s almost certain AG Barr saw this coming, which is why he forced DAG Rod Weaselstein to stick around, share in the decision and deflect the politics.

So, a reasonable question would be: How long did Mueller investigate conspiracy with Russia before jumping to Obstruction of Justice? I think the answer is that Mueller abandoned the Russia angle around August 2017, when he asked Rosenstein for an updated scope memo.

Everything from August 2017 through to March 2019 was Robert Mueller and his team trying to prove an obstruction case of a predicate Russian investigation that was non-existent, and based on a false premise.

We have every right to be angry !

From the CTH article comments:

Related, spotted in FRee Space outside our Qomfy dome...