Fired NY prosecutor was given Biden-Ukraine allegations in 2018 but didnt follow up, emails show
Just The News ^ | 6-22-2020 | John Solomon

Could the impeachment scandal have been prevented if the now-fired U.S. Attorney Geoffrey Berman had followed up on Ukrainian allegations about Joe Biden and his family in 2018?

That’s the tantalizing question raised by emails from fall 2018 between an American lawyer and the chief federal prosecutor in Manhattan that were obtained by Just the News.

The memos show that well before Ukrainian prosecutors reached out to Rudy Giuliani, President Trump’s lawyer, in 2019 to talk about the Bidens and alleged 2016 election interference they first approached Berman’s office in New York in October 2018 via another American lawyer.

Lutsenko, who emerged as a key figure in the impeachment scandal, wanted to confidentially share with federal prosecutors in New York evidence he claimed to possess that raised concerns about the Bidens’ behavior as well as alleged wrongdoing in the Paul Manafort corruption case.

After the botched Mueller Report (and subsequent Mueller testimony), Schiff/Nadler/Pelosi/Schumer et al were desperate. They certainly don't want any solid evidence to support a completely different NARRATIVE against the Biden-Ukraine dealings. So they impeached Trump-Ukraine instead.

American “Justice” system is hardly that. Its a political warfare battleground.

Whoa! Did Trump just bait the media and Jerry Nadler into reopening THAT door??

If I understand this correctly, Berman ‘shot the messenger’.

Instead, of pursuing leads against the Biden’s, Berman goes after Guillani’s friends.

If I understand this correctly, Berman ‘shot the messenger’.

Instead, of pursuing leads against the Biden’s, Berman goes after Guillani’s friends.

That’s exactly what happened. There is coup raging in SDNY and the GOP couldn’t care less. Graham has already blocked Trump’s pick to run SDNY and Barr has put a DOJ insider in that spot.

These people underestimate how Trump plays them.

Nadler....he is in la la land if he thinks he has a shot at another impeachment.

I think you’re spot on. He seems to be a master at tossing something out there to see if they’ll take the bait. If they ignore it, he tosses a bit more until they’re forced to do something about it.

They want Corona, BLM, and ANTIFA to be around until November 3, 2020.

Well, something tells me that this and the ever apparent mental decline of their candidate will be much more damaging. And now I’ve read that Team Biden is declining additional debates. Lord help this country with his VP pick.

He was actively in the process of going after Guillani himself.

Let me say first-—I do not trust anything Graham says.

But, Graham may be doing some horse trading with Schumer re the ‘blue slip’.

I am willing to wait a couple of weeks to see how it works out re Trump’s pick for SDNY.

I wonder if Iran and/or Jeffrey Epstein figure into this, too.... 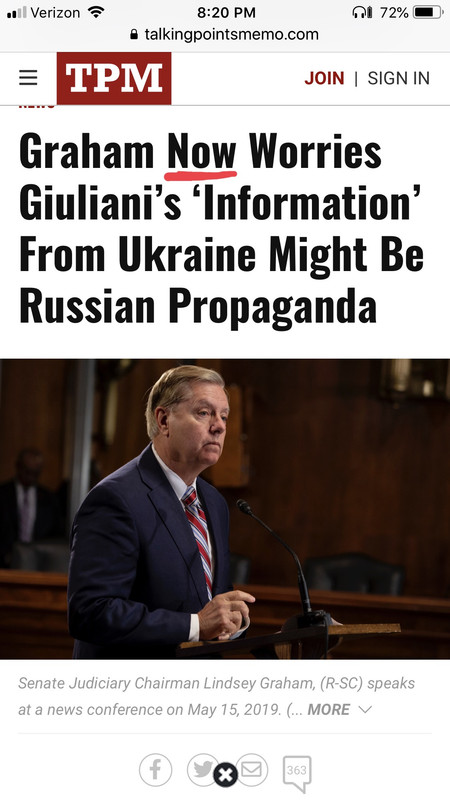 Graham refused to look at it, but slimed it.

What ever happened to his hearings and 30 witnesses? Did he cave already?

Turn over any stone, and you are bound to find a snake, worm, grub, or some other sort of bug. 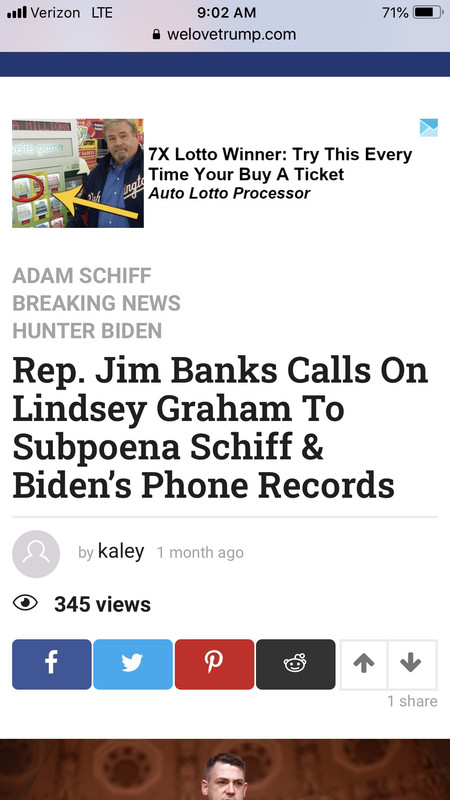 >>>> Nadler....he is in la la land if he thinks he has a shot at another impeachment.

Nadler not so much, he said so (hinted) on one of the Sunday Morning Talk Show rounds. Not interested in Bolton’s testimony wrt allegations in his new book, Nadler actually said election in less than 5 month away, etc. etc.

Schiff (who had solid evidence of Trump-Russia Collusion for > 3 years, and the sole engineer of the house “impeachment inquiry” on Trump-Ukraine I-don’t-know-what) is the one signaling that Congress would be interested in “hearing what John Bolton has to say”.

If Biden declines then if I were Trump, I would have my own debate and he can show a video of Biden speaking for each question asked.

Biden is going to damage himself but then again, there are so many stupid people who can’t see the writing on the wall regarding his health and other issues.

When I spoke about Biden to some elderly people over the weekend, they disagreed with me about Biden and dementia.

Instead, they told me he has people who direct his every move and speech. I was also told not to believe everything I hear and read.

The prosecutor was nothing more than a hack for the DNC. Linda Graham is pissed that he was fired.

This can cut both ways. Nadler will insist that Berman was fired for refusing to do Trump’s political dirty work. Solution = let’s see the evidence against the Bidens.

He reached a sweetheart deal with Rochester Drug Cooperative, letting them off with a $20m fine for this:

‘Rochester Drug Co-Operative’s oxycodone sales increased by 800% and its fentanyl sales jumped by 2,000% between 2012 and 2016, Berman said. During the same period, the company’s internal compliance office flagged 8,300 orders but reported just four to the U.S. Drug Enforcement Administration. From 2012 to 2016, RDC’s sales of oxycodone tablets grew from 4.7 million to 42.2 million – an increase of approximately 800 percent – and during the same period RDC’s fentanyl sales grew from approximately 63,000 dosages in 2012 to over 1.3 million in 2016 – an increase of approximately 2,000 percent.’

A $20mil fine (barely a slap on the wrist), and as far as I know, no one is in jail. Are you kidding me? How many people did they kill?

Bermen should have be fired for this alone!

Can Berman be disbarred for this behavior?