Documents show concerns about Ebola shipment from National Microbiology Lab, no relation to COVID-19 (according to the CBC)

Newly-released access to information documents reveal details about a shipment of deadly pathogens last year from Canada's National Microbiology Lab to China — confirming for the first time who sent them, what exactly was shipped, and where it went.

CBC News had already reported about the shipment of Ebola and Henipah viruses but there's now confirmation one of the scientists escorted from the lab in Winnipeg amid an RCMP investigation last July was responsible for exporting the pathogens to the Wuhan Institute of Virology four months earlier.

Dr. Xiangguo Qiu, her husband Keding Cheng and her students from China were removed from Canada's only level-4 lab over what's described as a possible "policy breach." The Public Health Agency of Canada had asked the RCMP to get involved several months earlier.

The virus shipments are not related to the outbreak of COVID-19 or research into the pandemic, Canadian officials said.

PHAC said the shipment and Qiu's eviction from the lab are not connected.

Online claims that Chinese scientists stole coronavirus from Winnipeg lab have 'no factual basis' "The administrative investigation is not related to the shipment of virus samples to China," Eric Morrissette, chief of media relations for Health Canada and the Public Health Agency of Canada wrote in an email.

"In response to a request from the Wuhan Institute of Virology for viral samples of Ebola and Henipah viruses, the Public Health Agency of Canada (PHAC) sent samples for the purpose of scientific research in 2019."

However, experts are concerned.

"It is suspicious. It is alarming. It is potentially life-threatening," said Amir Attaran, a law professor and epidemiologist at the University of Ottawa.

One of the scientists escorted from the National Microbiology Lab last year amidst an RCMP investigation was responsible for a shipment of Ebola and Henipah virus to the Wuhan Institute of Virology four months earlier - although the Public Health Agency of Canada still maintains the two are not connected.

"We have a researcher who was removed by the RCMP from the highest security laboratory that Canada has for reasons that government is unwilling to disclose. The intelligence remains secret. But what we know is that before she was removed, she sent one of the deadliest viruses on Earth, and multiple varieties of it to maximize the genetic diversity and maximize what experimenters in China could do with it, to a laboratory in China that does dangerous gain of function experiments. And that has links to the Chinese military."

Gain of function experiments are when a natural pathogen is taken into the lab, made to mutate, and then assessed to see if it has become more deadly or infectious.

Most countries, including Canada, don't do these kinds of experiments — because they're considered too dangerous, Attaran said.

"The Wuhan lab does them and we have now supplied them with Ebola and Nipah viruses. It does not take a genius to understand that this is an unwise decision," he said.

"I am extremely unhappy to see that the Canadian government shared that genetic material." 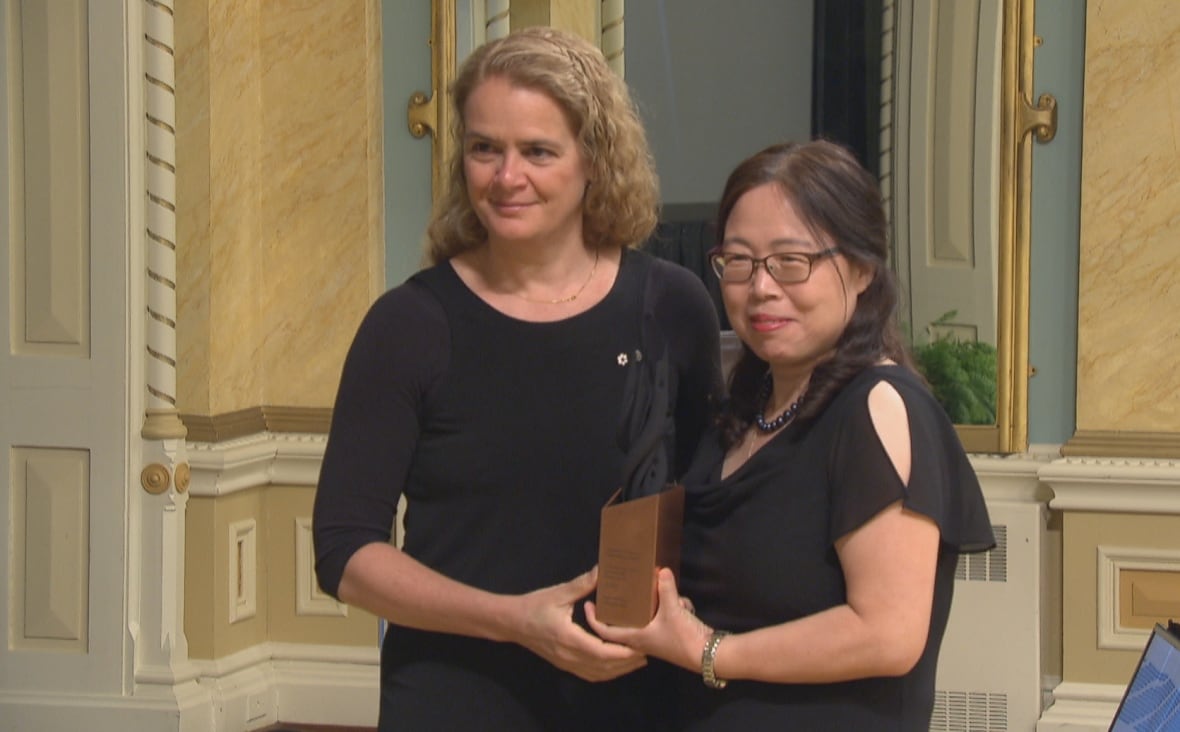 Dr. Xiangguo Qiu accepting an award at the Governor General's Innovation Awards at a ceremony at Rideau Hall in 2018. Qiu is a prominent virologist who helped develop ZMapp, a treatment for the deadly Ebola virus which killed more than 11,000 people in West Africa between 2014-2016. (CBC)

Attaran pointed to an Ebola study first published in December 2018, three months after Qiu began the process of exporting the viruses to China. The study involved researchers from the NML and University of Manitoba.

The lead author, Hualei Wang, is involved with the Academy of Military Medical Sciences, a Chinese military medical research institute in Beijing.

All of this has led to conspiracy theories linking the novel coronavirus responsible for COVID-19, Canada's microbiology lab, and the lab in Wuhan.

The RCMP and PHAC have consistently denied any connections between the pandemic and the virus shipments. There is no evidence linking this shipment to the spread of the coronavirus. Ebola is a filovirus and Henipa is a paramyxovirus; no coronavirus samples were sent....

we just need to start shooting people for stupid deadly shiite like this.

Pray that the muzzies never have scientists who can develop these deseases. They’ll release them on this world in a Wuhan second.

On the eve of WWI, the US (Johns-Hopkins?) provided the Kaiser with anthrax samples.

Our enemies have taken notes. There is a very dark front on the horizon.

I sure hope we have a handle on this as another could be released in say, October?

Yet the PLA is testing its COVID vaccine on Canadians. Go figure.

The previous head of WHO was a Chinese-Canadian that chose China as her sponsor in the job.

9 posted on 06/14/2020 5:02:45 PM PDT by Pajamajan ( Pray for our nation. Thank the Lord for everything you haave. Don't wait. Do it today.)
[ Post Reply | Private Reply | To 1 | View Replies]
To: jerod
According to the Canadian governments propaganda arm the CBC, it's all okay and everything is just fine... Nothing to see here.

Yes, all the necessary procedures and protocols were followed, so there's no reason to be concerned.

I cannot comment further due to issues related to the privacy and human rights of the persons involved.

10 posted on 06/14/2020 5:05:57 PM PDT by Steely Tom ([Seth Rich] == [the Democrats' John Dean])
[ Post Reply | Private Reply | To 1 | View Replies]
To: jerod
The Ebola publication in 2012 was from a Canadian lab in which she was probably a post-doc, doing a project that was given to her to complete. It was a monoclonal antibody study, using three different antibodies in combination in monkeys. If given within 24 hours of infection, they were 100% effective in preventing death. When given within 48 hours they prevented 50% of deaths.

Anyway, it was Canadian research, not research from China. Further, and most importantly, you have to be out of your mind to support ANY lab that wants to do gain of function research on Ebola. It's incredibly irresponsible, and that the NIH sent any funding there at all is also egregious.

I would also like to know how she shipped or transported these viruses. FedEx, on dry ice? That would be outrageous, but would not surprise me in the least.

That Wuhan lab is responsible for Covid, and I am not convinced it doesn't also have military connections as a bioweapons lab. I would really like to know how many American, Canadian, and European virologists have been wined and dined in China, to convince them of the ‘goodwill’ and scientific credibility of the Wuhan lab.

At least it was “on the eve”; after the war started, we violated our own neutrality by arming England to the teeth. I live within a dozen miles of TWO sites in NJ that were targeted by pro-German saboteurs because they knew the weapons were being sent to kill German troops - in violation of that neutrality (Black Tom Island in Jersey City - by the Statue of Liberty - and the Canadian Car and Foundry Company in Lyndhurst NJ - by Giants Stadium). To say nothing of the Lusitania...

The Canadians screwed up and they know it.