I was surprised and shaken when I read the news recently that a Pakistani court had overturned the conviction of Ahmed Omar Saeed Sheikh, the man convicted of masterminding the abduction of my friend Wall Street Journal reporter Daniel Pearl in 2002.

Saeed did not murder Danny himself, but he did lure him from his home and, one way or another, delivered him to his death. At his trial, Saeed — a militant jihadi who had been previously convicted of a separate kidnapping of Western tourists in India — was found guilty of murder and kidnapping.

He was sentenced to death, and he and three accomplices were sent to prison. That was 18 years ago. Now it seems, Saeed will be out on the street in three months if the prosecution can’t win a last-minute reversal in Pakistan’s Supreme Court.

The news of Saeed’s substantial change in fortunes jolted me back to the past, when Danny and I were fellow reporters for American newspapers in the pre-9/11 Arab and Islamic world.

Though some of Pakistan’s investigative work is questionable, most of the prosecutors’ conclusions have been corroborated by the FBI’s in-depth inquiry, according to Asra Nomani, Danny’s friend and colleague at the Wall Street Journal who led a respected, multi-year investigation into the killing with a group at Georgetown University. Nomani’s report concluded that Mohammed probably was the person who beheaded Danny. But she too believes strongly that, for justice to be served, Saeed must not be released.

*** But in the meantime, it would be wrong to throw open the prison doors and allow onto the streets the man who carefully and willfully planned the abduction that ultimately led to Danny’s brutal and tragic killing.

TOPICS: Crime/Corruption; Foreign Affairs; News/Current Events; War on Terror
KEYWORDS: islamic; jihad; jihadi; pakistan; radical; terrorist
Danny Pearl was my classmate at Stanford. Why wasn't this islamo-fascist executed years ago?
1 posted on 04/19/2020 10:08:28 PM PDT by KingofZion
[ Post Reply | Private Reply | View Replies]
To: KingofZion
Former Mayor of NYC Ed Koch was so absolutely outraged by Daniels murder that he had it engraved on his tombstone. 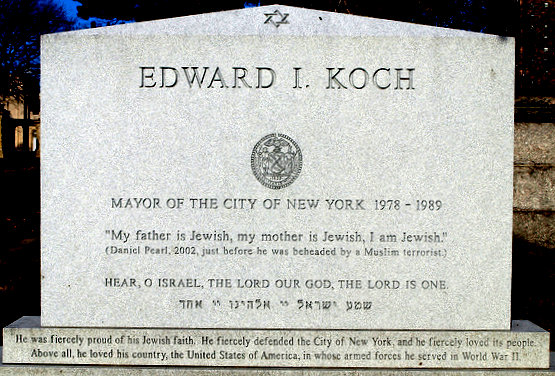 Probably the same reason why they don’t kill cop killers in New York city: So they can be released later on. So far Gov. Andrew Cuomo approved 3 releases in the past year, cop killers who were protected from the death penalty by Andrews father Mario Cuomo when he was Gov. of NY

This was in Pokistan, I am surprised he hasn’t been awarded their equivalent of the Presidential Medal of Freedom.

His murder was used to club President Bush. Daniel’s father did his part by personally blaming our president, it was sickening.

A hit squad needs to take the guy out.

Because Pakistan is run by Islamo-fascists.