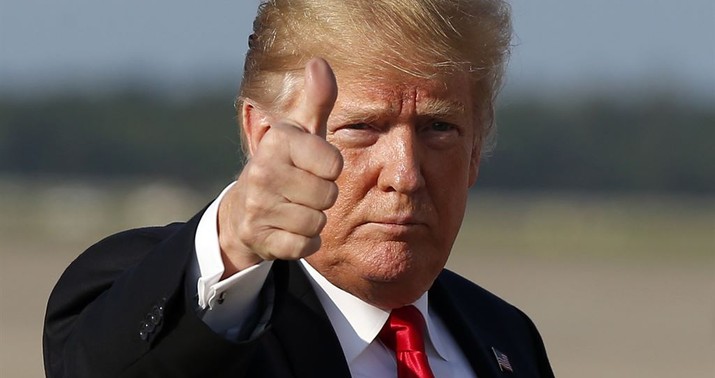 If it’s not “the economy, stupid,” as James Carville famously exhorted, then it’s the judiciary, smarty-pants. Those two issues turn out Republicans and conservatives more than any others in presidential elections, and it’s a sure bet the latter is why reluctant conservatives rallied to Donald Trump in 2016 — well, most of them, anyway. And Trump has delivered in both areas, but especially on judicial appointments.

His biggest triumph — shared by Senate Majority Leader Mitch McConnell — could well be the Ninth Circuit Court of Appeals, the famously far-left appellate panel. The Los Angeles Times calls Trump’s ten appointments to the Ninth Circuit a “shock wave” that has flipped the court:

In few places has the effect been felt more powerfully than in the sprawling 9th Circuit, which covers California and eight other states. Because of Trump’s success in filling vacancies, the San Francisco-based circuit, long dominated by Democratic appointees, has suddenly shifted to the right, with an even more pronounced tilt expected in the years ahead.

Trump has now named 10 judges to the 9th Circuit — more than one-third of its active judges — compared with seven appointed by President Obama over eight years.

To assess the early impact of these appointments, The Times interviewed several judges on the 9th Circuit. Some either declined to discuss their colleagues or inner deliberations or refused to be quoted by name, saying they were not authorized to speak about what goes on behind the scenes.

To be sure, some of the new appointees to the 9th Circuit have quickly won the respect of their colleagues. But the rapid influx of so many judges — most without judicial experience — has put strains upon the court and stirred criticism among judges appointed by both Democratic and Republican presidents.

The term “flipped” seems pretty overblown, at least for now. Readers find out a little further in that Democratic appointees still outnumber Republican appointees 16-13 on the panel. Even that’s a little misleading, as Ed Whelan notes, as a few of the Republicans are considered moderate-to-liberal, including the one that claims the court has been “flipped”:

And same claim in article by Judge Milan Smith is particularly odd, as Smith, though appointed by GWB, is widely regarded as a moderate liberal.

If there’s any “shock wave” involved, Hugh Hewitt writes, it’s that the Ninth Circuit is finally back in the mainstream of appellate courts:

The court hasn’t flipped, its “reverting to the norm” of every other circuit from its outlier status.

Oddly enough, the Los Angeles Times never mentions the original shock wave that made all this possible. Then-Senate Majority Leader Harry Reid changed Senate tradition in his 2013 “nuclear option” by using a simple majority to change rules to bar filibusters on judicial confirmations. That gave Barack Obama carte blanche to stack the DC Circuit, but it also placed a powerful tool in the hands of subsequent Senate majorities of the same party as the president. Voila! Trump now has 51 appellate appointments under his belt, and if he wins a second term on the basis of protecting the judiciary, undoubtedly will get dozens more confirmed as well.

The complaints in the article over Trump’s ten appointments are, by contrast, overblown. They’re divisive! They don’t follow the rules! They didn’t have judicial experience! Closer to the end, however, other voices remind readers that both Obama and Clinton appointed non-judges to the Ninth Circuit and that everyone has a learning curve when taking an appellate post.

This “shock wave” is just a nonsense comment, an attempt to paint these appointments as some sort of unprecedented makeover just seven years after Reid and Obama did the same damned thing on the other coast. It’s as overblown as the hyperbole over the Ninth Circuit’s rate of reversals.

It does serve one purpose, however — to remind conservatives and moderates about the consequences of the next election. Who do they want to see appointing the next two Supreme Court justices and dozens of appellate judges — Bernie Sanders or Donald Trump? It’s still going to be the judiciary, smartypants.

The Dems were so busy trying to remove Trump from office via impeachment that they did not mind the shop. They should have been trying to flip several votes on the judicial nominees but they dropped the ball. And McConnell pushed through Trump’s nominees one after another.

The more miserable the commiepukes become, the jollier I am!

The majority were appointed by Democrats. This journo has a strange definition of “flipped”. Maybe “flipped” is the word of choice for “not completely Democrat”.

Milan Smith is 78 this year and time for move to senior status.

Some of the older Clinton appointees might be waiting until after the election to retire, hoping for a democrat president.

“Three are Asian Americans — one an openly gay man who has two children with his husband.” - LA Times article

Trump is psychotic when it comes to appointing queers

Trump has their number for sure. The DNC is broke, a communist leads the party and some midget is trying to buy his way into the slot. Not a good look for 2020

No concerns from them about a SOCIALIST running for president? None?

18 posted on 02/22/2020 11:41:45 PM PST by stuck_in_new_orleans
[ Post Reply | Private Reply | To 1 | View Replies]
To: SeekAndFind
The term “flipped” seems pretty overblown, at least for now. Readers find out a little further in that Democratic appointees still outnumber Republican appointees 16-13 on the panel. Even that’s a little misleading, as Ed Whelan notes, as a few of the Republicans are considered moderate-to-liberal, including the one that claims the court has been “flipped”:

It is far from flipped, but because of the way the courts operate, in 3-judge panels, more decisions from these panels are coming back with reasonable decisions. Previously, these decisions happened infrequently, and could be overruled when needed by en "en banc" review by a larger number of judges who could more reasonably be trusted to reach a decision acceptable to the left. But the courts are busy, and re-arguing cases en banc takes up a lot of time. So, they have to pick and choose cases that are more important to them, and let lesser cases slip by. So, the court is a little "better", but still far from flipped. It will take at least 5 or 6 more judges to do that.

Milan Smith, the “Republican” judge who said Trump flipped the Ninth Circuit, was confirmed 93-0 in 2006.