For comparison on the GOP side, the last time a Republican president was an incumbent at this stage of the campaign, the RNC raised $107 million in 2004. All this 2020 money makes RNC Chairwoman Ronna McDaniel very happy.

The RNC has burned through some money but has a reserve of $76 million. What’s more, the party doesn’t have a dollar of debt. Meanwhile, President Trump has been raising his own campaign cash since declaring his 2020 intentions the day he took office. According to the Center for Responsive Politics, he has brought in $211 million since then.

Republicans cite these facts with obvious glee, and they invite reporters to contrast their numbers with those of their competitors across town at the Democratic National Committee. According to the Federal Election Commission, the DNC raised $10 million in January. The committee did not return request for comment.
.
.
.
Another reason for hope for Democrats? Bloomberg.

Even if the billionaire loses the primary, his campaign will likely morph into a sort of outside super PAC to support the nominee.

If Democrats are going to beat Donald Trump, they have to hope Bloomberg’s checks, and others, keep coming.

TOPICS: News/Current Events; Politics/Elections
KEYWORDS: 2020; dnc; fundraising; rnc Navigation: use the links below to view more comments.
first 1-20, 21-25 next last
Besides Bloomberg and Soros, there's a ton of dark money out there, where the Dems do very well. I'm going to contribute to several individual House and Senate candidates in close races, like James in MI. I'll probably give money to Susan Collins, even though she's no conservative, because she's pushing back against the psychos.
1 posted on 02/22/2020 10:07:09 AM PST by lasereye
[ Post Reply | Private Reply | View Replies]
To: lasereye
Dwarfing Dems. 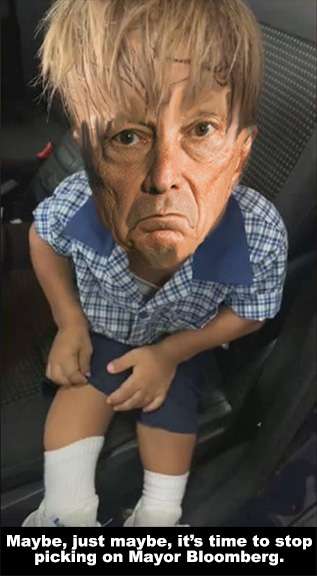 The DNC may be broke but Democrats have a sizable unofficial money haul that will keep them competitive.

Not to mention in kind media contributions...

4 posted on 02/22/2020 10:24:51 AM PST by gov_bean_ counter (AOC the bartender would have had to work on the second floor at Miss KittyÂs saloon...)
[ Post Reply | Private Reply | To 3 | View Replies]
To: goldstategop
The DNC may be broke but Democrats have a sizable unofficial money haul that will keep them competitive.

Pretty much. Same thing happened in 2018. RNC far out raised DNC only for a mountain of money to pour into the coffers of Democratic candidates from billionaires like Soros and Bloomberg. They ended up taking The House. If I were The RNC I wouldn't crow too much but rather quadruple efforts to raise money.

5 posted on 02/22/2020 10:25:26 AM PST by SmokingJoe
[ Post Reply | Private Reply | To 3 | View Replies]
To: lasereye
GOP should spend that money fighting tooth and nail to win. RINOs need to join the fight, step aside or join the losing side. If Democrats win the House or Senate there'll be hell to pay.

If America wins I hope President Trump focuses on election crime and corruption using every bit of power he has. America needs a secure election system first and foremost.

is the RNC $ controlled by GOP-e or people friendlier to PDJT now?

I keep saying these numbers are irrelevant as the GOP and Dem funding models are so different. The GOP accrues huge war chests, mostly to fight against conservatives or line the pockets of their consultant buddies. For example, the current mess in Virginia is due entirely to the GOP fighting against THEIR OWN CANDIDATE two elections ago, supporting instead Xlintoon bag man Terry McAwful and his successor, Gov. Baby Killer McGungrabber.

The Dems fund candidates more directly through decentralized support, i.e. individual/corporate/PAC commies send money to their favorite commie candidates directly. Plus, the Dems have the overwhelming advantage of controlling nearly the entirety of the media, and can thus count on $5-10 BILLION in friendly news coverage, $20B if you count down ballot elections.

There is a better overview of the six committees at this page.

So how Much do
The Dems need to
Take the White House
and beat Trump?

Could we be looking at a landslide Trump reelection?

FRiends, no matter where you live – a deep Blue or Red state, GO VOTE!!! We need not only an electoral college landslide, but a resounding popular vote victory (putting that popular vote vs EC BS to rest), and handing the left-wing idiots a gut wrench demoralizing defeat!

From a fund-raising email. I got this a few hours ago:

We're sorry for the Saturday email but this week's been a whirlwind. Here's what you need to know:

2. Liberal presidential candidates are raking in cash after their radical, anti-Trump debate

3. Our end of month fundraising deadline is right around the corner and we're short by a mile

We know we can't reach our goal this weekend... but we need to raise $15,000 by Sunday or we won't stand a chance to make our monthly goal.

Fortunately, Steve Scalise just activated a 500% donation match because he knows how important this benchmark is.

Democrats are rallying their Hollywood elites and megadonors right now.

We don't have that luxury. That's why we're coming directly to you. We HAVE to keep up.

Anything you give this weekend will go five times further.

That was pre-Trump and before dozens of RINOs were retired or were defeated over the past two election cycles. We're living in the era of Trump and Trump and his allies in the party are going to have the most control on how the GOP money is spent.

To bad they will use it to elect / reelect RINOe.

DCCC vs. NRCC for that e-mail most likely

Didn’t Bloomie say he was in for up to 2 billion? He has already spent 400 mil. If the money were to decide the election then we have already lost.

Most campaign money is raised by the candidates, and some of the Democrats substantially outspend their Republican opponents in close races. I dont think the reverse has happened in recent years.

It’s best to contribute to individual candidates or conservative PAC’s, such as pro-life, pro-gun etc.