Washington -- Dare we call it the Trump Revolution? We call the presidency of Ronald Reagan the Reagan Revolution. Well, consider what President Donald Trump has achieved in but three years. He has revived the economy with ample growth, historically low levels of unemployment and efficiencies in the economy thanks to the removal of unnecessary stultifying regulations. He promises more if reelected. He has assured international peace and stability. Becoming a prominent terrorist is no longer a smart career choice. Longevity can be problematic. And the president has assured a judicial system stocked with men and women who really believe in the rule of law. Furthermore, he has brought us two Supreme Court justices that will abide by the Constitution. If he has four more years in the White House, he will bring us more.

Do the heads of these agencies really think that Trump colluded with Vladimir Putin? I have not seen the evidence. A two-year investigation conducted by special counsel Robert Mueller could not find the evidence either. So, let us come up with the evidence that will convince Americans that -- as John Brennan, formerly of the CIA, has said -- Trump's behavior was "treasonous."

Now what Trump has dubbed "the swamp" is erupting with more poison. Just the other day, we learned that the Committee on Codes of Conduct of the U.S. Judicial Conference is planning to bar judges from belonging to the Federalist Society. The Federalist Society is a scholarly group of law students, law professors and lawyers whose interest in the law leads them to hold seminars, lectures and other such events that revolve around the law. It has chapters at law schools all over the country. Its members are mainly conservative and libertarian, but it is open to all comers, and there are even a few adventurous liberal members.

As a matter of fact, they do. It is called the American Constitution Society. Moreover, it is a highly political organization, as might be expected from liberals. What organization of liberals is not highly political? It takes political positions, counsels on judicial appointments and files amicus briefs. The Federalist Society follows none of these practices.

Now the clever minds of the Committee on Codes of Conduct have published a bull pronouncing that judges be barred from both organizations. I have a better idea. Let the First Amendment's right to free association be affirmed, and let judges be members of either society or both societies. Better yet, encourage judges to join the Women's Christian Temperance Union. It is an admirable organization that deserves a comeback, especially in light of the spreading legalization of marijuana.

Now, let us get on with the Trump Revolution.

More of a Counter-revolution, IMHO. 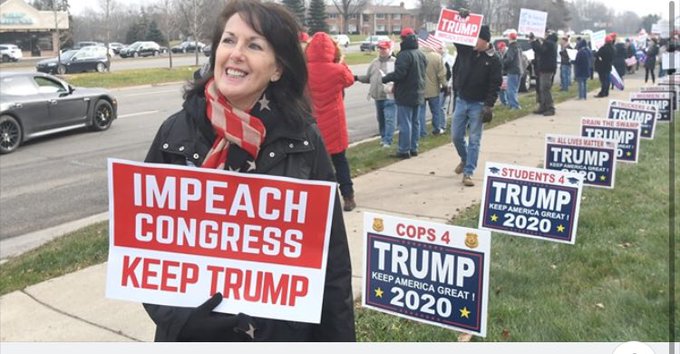 The Federalist Society was formed as an alternative to the hyper-partisan American Bar Association.

There ought to be some measure of civilian oversight when it comes to judging judges. It seems to me that profession could easily run amok with its own criteria. What recourse do we have short of voting and/or impeachment?

That’s a good one.

A guy opened up a Trump shop about five miles from my stepdad’s place; one of the items he has (and is probably a best seller) is a t shirt that has an upraised middle finger with the phrase “Impeach this!” written on it.

One of Mark Levin’s liberty amendments proposes a 24 month window after any court decision in which Congress or the states, on a three-fifths vote, may reverse a majority opinion.