Stocks are lurching toward fresh records to commence the first trading day in 2020, but that advance has raised some questions about the run-up in values for broad-market U.S. equity benchmarks.

Indeed, the S&P 500’s recent gains have taken it to its priciest level relative to its hourly cost for the average worker on record.

By that measure, Tuesday’s climb by the S&P 500 SPX, +0.84% to a peak at 3,250.04 would mean that the average employee, at an hourly wage of $28.29, would need to work 114.88 hours to buy a single unit of the index, representing one of the loftiest levels on record, according to data from FactSet and the U.S. Bureau of Labor Statistics.

Data from the Federal Reserve Bank of St. Louis estimates that the average worker needed to work a record 109.75 hours, based on its most recent employment data, as of Dec. 6 (see chart below):

REmember in the old days when the economy and the stock market were related?

I made $5k today. Been doing close to it for the last 2 weeks. Took out some today. Didn’t want to pay the taxes for last year. More vacations?

And this headline puts this in a negative light WHY???

I just re-allocated my retirement portfolio to be less aggressive in the coming year. The last three years have been pretty incredible (30% growth last year alone) so I'm pulling back a bit and locking in some of my gains.

Nobody really knows though. Maybe we have another 30% year.

I hope I don't end up regretting it but I already have enough to retire on so want to protect what I have as much as I can.

[And this headline puts this in a negative light WHY???]

Because it was written by liberals?

Yep, me too very close to it but there is a feeling that a correction is coming soon.

RE: REmember in the old days when the economy and the stock market were related?

The economy is complicated and it moves fast. News breaks and headlines don’t always tell the whole story.

On the one hand, The stock market is a market where stocks, a type of investment that represents ownership in a company are traded. All we can say is, when the overall economy does well, companies do well and those listed on the stock market do well.

On the other hand, we can also say that The stock market is where people make bets on what’s going to happen in the economy. A bet is just that -— a bet. A bet could be wrong or right, so it is simply a measure of prevailing sentiment.

The stock markets are curated lists of companies that represent particular slices of those markets.

On the other hand, The economy is a sum of goods and services, all of the things we produce. Who produces these things that make up the economy? All of us; every wage level, every industry, every profession. Unlike the stock market.

Whether we like it or not, the richest Americans hold the lion’s share of the value in the stock market despite the fact that about half of households own some stock.

Another way in which the stock market and the economy are not synonymous is that you can have, you know, workers’ wages really stagnating or growing only marginally as compared to the increases that we’ve seen in the stock market. 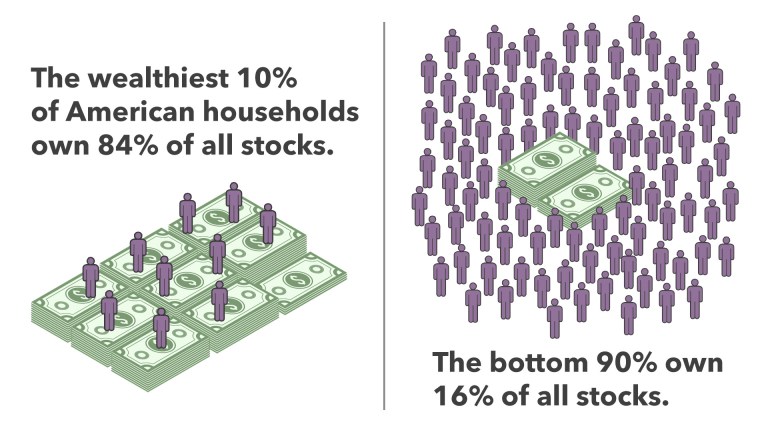 Expect unimaginable fraud this year. We have far surpassed unacceptable levels of independence

To blame President Trump in an election year.

They do make it sound bad that way.

How many hours you have to work to buy one share doesn’t matter. All that matters when you are buying one share or one billion share is how much you sell the share(s) for.

Whenever I do that (whatever my number is) my wife says, "Its the same 5k you lost yesterday."

However, over the years, that number has gone up. The market has been our friend on balance.

Only the huge investors and institutional investors buy individual shares. Normal investors invest in stock funds that do the investing. It doesn’t matter if it is a share of Microsoft, a share of S&P, or a share of Bob’s Grocery. Fund investment is where the great majority invest. This story is either a whine or a great new story, depending on which way you look at it.

The Left can't deal with markets on fire under Trump, so they have to come up with absurd twists on reality, to try and make it all look evil.

I've given up on simply calling these people demoncRats, Leftists, Socialists, or Communists.

They're simply anarchists. They see anything good, and instantly fixate on it and want to destroy it.

Honestly, it's time to recognize them for who they are ENEMIES OF OUR NATION, arrest, prosecute, convict them and put them in prison until the next millennium.

The capital worth of stocks in the United States, has grown over $10 trillion dollars since Trump was elected. I suspect it may be as high as four times that much altogether.

The anarchists can't grasp what that means in real terms.

To them it has to be evil. So White rich guy got richer.

The fact is, everyone did. Sure there are exceptions, but with capital businesses expand, invest, hire, implement new goals, produce. It's actually magical, but the anarchists see only a nightmare.

Truth be told, other nations around the world stand in awe of us.

There's no other nation our enemies want to destroy as much as they to destroy the U. S., and our anarchists stand with them. Their policies harm their people, and usually wind up killing tens of millions of them.

The other nations who want to emulate us, do things that will help their own people. Not only do their people not die, they live better lives than they did before.

Without the U. S., this old world would fall in on itself.

Those that fight us, are really killing themselves and their own future interests.

17 posted on 01/02/2020 1:38:04 PM PST by DoughtyOne (The Leftistist media and particularly CNN NEWS should come with a ten day supply of Cipro.)
[ Post Reply | Private Reply | To 1 | View Replies]
To: SeekAndFind
From that chart it looks like the index was bumping up against a ceiling which means the market just doesn't have buyers above that level. Resistance. And now it just busted through the resistance. If there was lots of volume over the last couple of sessions then it implies that the skeptics have given in and are buying again. Look for further growth. If it was low volume then it's a mirage and will probably fall.

Of course this is all nonsense and probably not true. Time will tell.

How long would the average worker have to work to buy one share of Berkshire Hathaway?

Why because the MSMedia controls the headlines.
Imagine if they presented the facts in a positive light, these numbers would soar.