Secretary of State Mike Pompeo will formally unveil a statue of former President Reagan in Berlin, 30 years after the Berlin Wall fell in the city.

During his visit in Germany, Pompeo will reveal the statue of Reagan at the U.S. Embassy in Berlin, according to a Facebook post from the U.S. Mission to the Organization for Economic Cooperation and Development. The statue will overlook the location where the president gave his speech calling for Soviet leader Mikhail Gorbachev to tear down the wall.

Pompeo will inaugurate the statue on Friday, the day before the 30th anniversary of the momentous event, The Wall Street Journal reported.

Artist Chas Fagan, who designed Reagan’s statue in the Capitol Rotunda, created the monument, including pieces of the former wall, according to the Journal. The statue is accompanied by a sign that displays Reagan’s famous quote from his 1987 speech, “Mr. Gorbachev, tear down this wall.”

The statue will sit on the U.S. Embassy’s terrace after a years-long debate over placing an American statue on German soil. Berlin politicians have protested the placement because the former president is already a designated citizen of the city.

That unveiling of the statue sounds like something a Vice President would usually do. Maybe Mr.Pence is already too busy to leave the country for such a ceremony.

Why is it that most dopey Germans still prefer the speech John F. Kennedy gave to a divided Berlin shortly after the wall was erected to the one Ronald Regan gave just before the wall came down?

Germany isn’t exactly in our best grace at the moment. Maybe sending Pompeo is actually a snub toward Merkel.

I think it is because most of the real men in Germany were killed in the War.

Because they are all socialists and they hated Reagan and hate him still as the Dems here do because he caused the collapse of their beloved USSR.

Good point.
Angela has behaved in a very snippy way toward our ambassador.

Leave Pence alone. Not one person can be around all the time.

The most important thing is that a statue of Reagan is being unveiled. Funny I didnt hear about this in the MSM except here on FR..

The "Germany Last" leader of their time...

Realize how fortunate Reagan was to have Thatcher, John Paul II and Helmut Kohl when he was in office.

I agree, and it highlights how much Trump has accomplished without such characters in his quiver.

Reagan was an amazing president. We were lucky to have him to fix much of what Carter screwed up.

Can you imagine four more years of that clown, having just become warmed up?

12 posted on 11/06/2019 11:41:18 AM PST by DoughtyOne (Pledge: "...and to the Democracy for which it stands..." I give up. Use the democRat meme...)
[ Post Reply | Private Reply | To 11 | View Replies]
To: yesthatjallen; lee martell; CondoleezzaProtege; Vigilanteman; Magnum44; billyboy15; ...
It's a very good likeness. I had the privilege of seeing President Reagan in person not long after he was inaugurated, and he was a very strong yet elegant man. 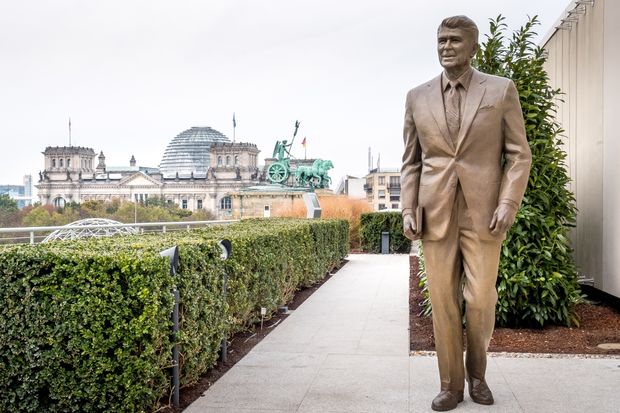 Thanks. That’s a damn good statue.

20 years from now, Trump will have one in Jerusalem..

Did you get to meet Bonzo?

It is a good statue.
Hopefully, it will be left alone, except as something to see.

I did not; only to see him for over an hour from a few feet away.