Ribat: The Truth Behind “Muslim Enclaves”- An ancient secret reveals what Islamic “No-Go” zones in the West really are.

Last March, 2019, Reuters reported that the “Islamic State’s last enclave in eastern Syria” had fallen.  “Its enclave at Baghouz was the last part of the massive territory it suddenly seized in 2014, straddling swathes of Iraq and Syria, where its leader Abu Bakr al-Baghdadi declared a new caliphate.”

While this was welcome news, it also prompted one to wonder: what of all those other Islamic enclaves, those unassimilated ticking time bombs that proliferate throughout the West, which are packed with ISIS-sympathizers, not to mention ISIS members, and which the West largely fails to recognize as such?  I am referring to those many so-called “No-Go Zones”:   Western cities and regions that have effectively become Islamic ghettoes.  There, Sharia is de facto law; Muslims are openly radicalized to hate infidels; non-Muslims, even police, are afraid to enter lest they get mugged, raped, or killed.

In short, the ISIS worldview continues to proliferate—and not in some distant theater of war, but right smack in the West itself (an internet search for terms such as “no-go zones” and “Muslim enclaves” demonstrates the prevalence of this phenomenon).

Although these enclaves are unique to the modern era, they have precedents in history and even a nomenclature within the Islamic consciousness.

Wherever the jihad was stopped, there, on the border with their infidel neighbors, jihadis formed strongholds, hotbeds of jihadi activities.  These became known as the ribat (رباط), an Arabic word etymologically rooted to the idea of a tight fastening or joining and found in Koran 3:200: “O you who have believed, persevere and endure and remain stationed [رابطوا] and fear Allah that you may be successful.”

In Islamic history, the ribat referred to the chains of jihadi fortresses erected along and dedicated to raiding the borders of non-Muslims.

The word ribat lives on, though few recognize it.  For example, Rabat, the capital of Morocco, is so named because in origin it was a ribat, whence centuries of Barbary/pirate raids on the Christian Mediterranean were launched.  Similarly, Almoravids—the name of an important eleventh century North African based jihadi group—is simply a transliteration of the Arabic al-murabitun, which means they who fight along the ribat (not unlike al-mujahidun, they who wage jihad).  In 1086 these “Almoravids” invaded Spain and crushed the Castilians at the battle of Sagrajas (or Zallaqa); afterward they erected a mountain consisting of 2,400 Christian heads to triumphant cries of “Allahu Akbar.”

From the start of the Islamic conquests in the seventh century till the mid-eleventh century, the quintessential ribat existed along the Muslim/Byzantine border in Anatolia (modern day Turkey).  There the oldest extant Arabic manual on jihad, Kitab al-Jihad (“Book of Jihad”), was compiled by Abdallah bin Mubarak. Born less than a century after Islamic prophet Muhammad’s death in 632, Mubarak committed his life to studying and waging jihad along the Anatolian ribat until his death in 797.  According to a modern historian, Mubarak was a paradigmatic murabit: he “served as a model of zeal in volunteering. His piety and asceticism gave him enormous strength”—he was known to “bellow like a bull or cow being slaughtered” when warring on infidels—and “his fellows continued to be drawn to his power after his death.” His Book of Jihad remains a classic among militant Muslims around the world.

With the coming and military successes of the Ottoman Turks, the Anatolian ribat continued edging westward, until it finally consumed Constantinople, the last bastion of the Byzantine empire, and most of the Balkans, reaching Vienna twice (in 1529 and 1683).

Another important frontier formed along the Duero River in Spain, separating the Christian north from the Islamic south.  For centuries, it too became “a territory where one fights for the faith and a permanent place of the ribat,” to quote another historian. As in other borders where Muslims abutted against non-Muslims, a scorched no-man’s land policy prevailed in the ribat of Spain.   Ibn Hudayl of Granada (d.812) once explained the logic:

It is permissible to set fire to the lands of the enemy, his stores of grain, his beasts of burden—if it is not possible for the Muslims to take possession of them—as well as to cut down his trees, to raze his cities, in a word, to do everything that might ruin and discourage him, provided that the imam deems these measures appropriate, suited to hastening the Islamization of that enemy or to weakening him. Indeed, all this contributes to a military triumph over him or to forcing him to capitulate.

After explaining how the Muslims intentionally devastated the Duero region—they later named it “the Great Desert”—French historian Louis Bertrand (b. 1866) elaborates:

To keep the [northern] Christians in their place it did not suffice to surround them with a zone of famine and destruction. It was necessary also to go and sow terror and massacre among them. . . . If one bears in mind that this brigandage was almost continual, and that this fury of destruction and extermination was regarded as a work of piety—it was a holy war [jihad] against infidels—it is not surprising that whole regions of Spain should have been made irremediably sterile. This was one of the capital causes of the deforestation from which the Peninsula still suffers. With what savage satisfaction and in what pious accents do the Arab annalists tell us of those at least bi-annual raids [across the ribat]. A typical phrase for praising the devotion of a Caliph is this: “he penetrated into Christian territory, where he wrought devastation, devoted himself to pillage, and took prisoners”. . . . At the same time as they were devastated, whole regions were depopulated. . . . The prolonged presence of the Musulmans, therefore, was a calamity for this unhappy country of Spain. By their system of continual raids they kept her for centuries in a condition of brigandage and devastation.

Why does this history lesson matter?  Because in many respects, the Muslim enclaves and “no-go” zones that proliferate throughout the West function as embryonic ribats: hotbeds of radicalization and jihadi activities targeting their immediate infidel neighbors—that is, their European host societies.

From here, one understands why two Muslim men from “a hardline Islamic enclave in Dewsbury, one of the UK’s most religiously segregated areas,” were “arrested by armed police on suspicion of a terror plot.”  Or why “the largest Muslim sect in the UK, controlling half of Britain’s Mosques [most of which are in enclaves], hosted an Al-Qaeda associate of Osama bin Laden who spoke to numerous future terrorists as he toured their mosques across the country.” Or why even in the United States, “Muslim children attending mosques and Islamic schools are being taught to hate America, our government, our military personnel and its non Muslim population.”

There is of course one crucial difference between history’s ribats and their modern day counterparts.  Ribats traditionally formed wherever Muslims could not, by force, go any further, thereby becoming frontier zones whence the jihad resumed.  Conversely, today’s quasi-ribats—AKA “enclaves,” “no-go zones,” etc.—are not located on the borders of non-Muslim regions but rather in the middle of European nations; moreover, those entering in and turning these Western regions into Islamic enclaves did not do so by force of arms but rather because they were welcomed in with open arms.

If Islam continues to grow in the West, and if Western peoples continue to retreat (in a myriad of ways), it is only a matter of time before the West’s many Muslim enclaves evolve into their most natural forms: ribats dedicated to waging full-blown jihad on their infidel neighbors—a scenario that makes the fall of the Islamic State’s last ribat in Syria pale in significance.

Well now the leader of ISIS is DEAD.

Thank you for posting this. An important article.

Knowing the hate Islam has for Israel and with the type of warfare described in this article, it a miracle of God’s will that Israel has survived to this day.

Islam will never be peaceful. It's against their religion.
7 posted on 10/27/2019 10:25:45 AM PDT by Lurkinanloomin (Natural Born Citizens Are Born Here of Citizen Parents_Know Islam, No Peace-No Islam, Know Peace)
[ Post Reply | Private Reply | To 1 | View Replies]
To: Trailerpark Badass
A deadly cancer, metastasizing throughout Western civilization.

Who will answer, this time? These guys are long gone... 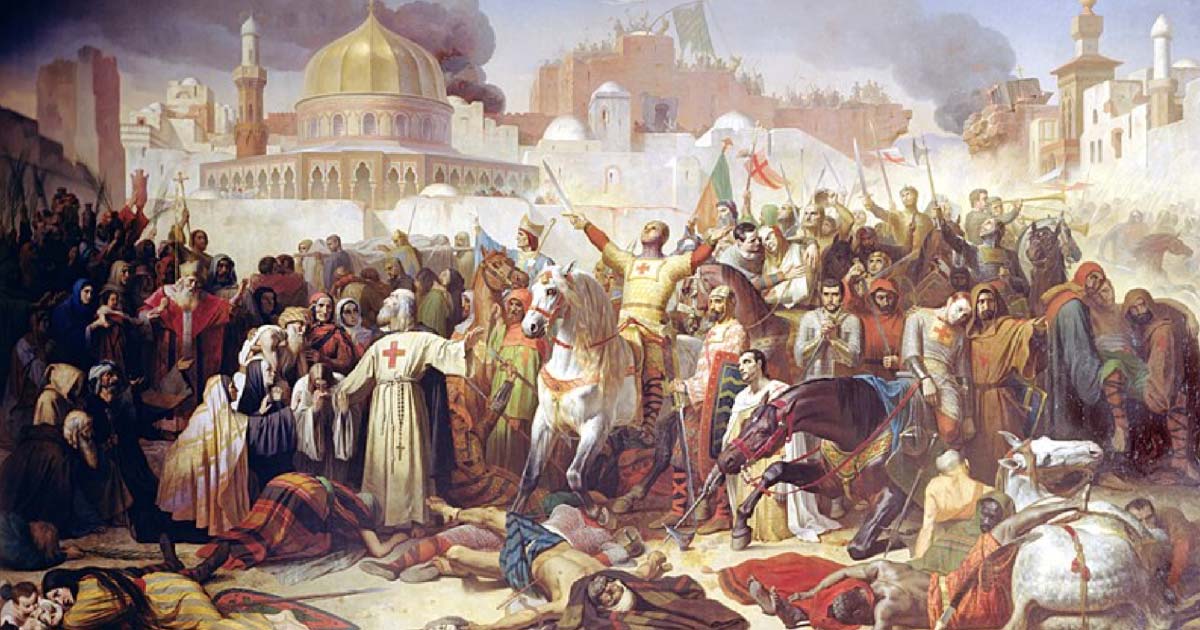 8 posted on 10/27/2019 10:28:18 AM PDT by polymuser (It's discouraging to think how many people are shocked by honesty and how few by deceit. Noel Coward)
[ Post Reply | Private Reply | To 3 | View Replies]
To: Lurkinanloomin
It's as simple as this Islam will never be peaceful. It's against their religion.

This would be easier for Europeans and Americans to grasp except for the Judeo/Christian beliefs of both groups.

Christian religions stress forgiveness and praying for trespassers, and in some cases turning the other cheek.
This makes them vulnerable to misunderstanding Islam which is the opposite. - Tom

Add to that predisposition the constant propaganda in favor of Islam.
Telling the truth about Islam is already illegal in some places.

Who will answer, this time? These guys are long gone...

The US tried to answer, but the US public has no stomach for long tern warfare and so will face the consequences at home - instead of extinguishing it abroad.

That’s a lot of words to simply say a no go zone is a politically correct way of saying its territory that has been taken by and lost to, the enemy.

Those, along with “turning the other cheek” and “meek”, are willful modern misinterpretations of Christianity. Making a profit from the foolish through willful misinterpretations is nothing new. The only question is whether a large enough group in the West will wake up soon enough to alert the others.

17 posted on 10/27/2019 11:47:51 AM PDT by gnarledmaw (Hive minded liberals worship leaders, sovereign conservatives elect servants.)
[ Post Reply | Private Reply | To 9 | View Replies]
To: gnarledmaw
Those, along with “turning the other cheek” and “meek”, are willful modern misinterpretations of Christianity.

Remember Christianity was formed six hundred years before Islam and did not have to deal with a religion that allowed deceit and subjugating and killing anyone who did not join the new Islamic religion.

As an agnostic, please spare me that God knows everything and would have seen Islam coming argument. - Tom

Your reading comprehension is as poor as your understanding of early Christian teachings and besides that I made no reference or allusion to God or omniscience. Your response is entirely a non sequitur. Maybe another 6-pack will make it more clear....