Weiner was even getting paid to work for a firm inside a known Democratic National Committee satellite office alongside a DNC official. (RELATED: Woman Found Dead, Stuffed Inside Garbage Chute At Anthony Weiner’s Apartment Building).

President Donald Trump claimed years ago that Anthony Weiner’s proximity to wife Huma Abedin, the top Hillary Clinton aide, made him a security risk. It is now clear how right he has always been.

Years of “shocking revelations” and no arrests because...swamp dwellers.

25 posted on 06/24/2019 11:39:08 AM PDT by b4its2late (A Liberal is a person who will give away everything he doesn't own.)
[ Post Reply | Private Reply | To 17 | View Replies]
To: bitt
James Comey incredulously claimed that he did not know Weiner was married to Huma Abedin during his Clinton investigation

Once again, proving he was incompetent or lying, either way he is guilty of malfeasance and crimes.

My favorite headline from those days, when Harry Reid finally stopped his increasingly ridiculous-looking support of Anthony Wiener.

“Reid Hangs Wiener Out To Dry”

The FBI acts like they can lie with impunity. So far, they have. 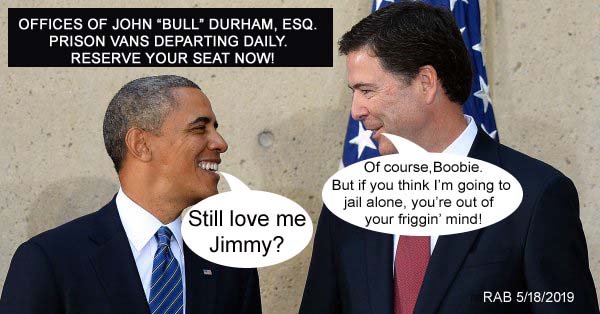 Well. Can her case be re-opened? Does anybody dare?

So the Weiner got Strzoked.

Seriously though, this would put the average person in jail.

What? Is he untouchable? Why does he still have a law license? Why hasn’t he been indicted?

Justice has become quite a joke.

The idea that Comey didn't know Weiner was married to Huma is absurd. The wedding was well attended by politicians incl Bubba and the Tent.

LOL, wtf is this guy talking about? A clickbait website “alluded” to that with anonymous sources that never amounted to anything, and even then, they claimed they got the info from the NYPD, not the FBI.

When is the statute of limitations up? As soon as that passes, there will be a flood of information and revelations, with the Clintons safely out of the flood.

38 posted on 06/24/2019 11:49:45 AM PDT by DBrow
[ Post Reply | Private Reply | To 30 | View Replies]
To: All
An 2017 email subject line “Comey’s Testimony on Huma Abedin Forwarding Emails Was Inaccurate" had top FBI officials scrambling to draft a letter to Congress about Comey’s May 3 Senate testimony. The new story line was “Comey’s revelation about Huma Abedin — [Anthony] Weiner’s wife and a top Clinton deputy — had made ’a regular practice’ of forwarding ‘hundreds and thousands’ of Clinton messages to her husband, ‘some of which contain classified information.’

The round might be fresh but the jokes are tired.