This is a tricky one, but is worth examining:

The New York Yankees reportedly confirmed Thursday that they were no longer playing a Kate Smith version of “God Bless America” during the seventh inning of home games, after the team learned of a Depression-era song she’d recorded that raised questions of possible racism.

Two songs cited by the New York Daily News, which broke the story, included “That’s Why Darkies Were Born,” a 1931 hit for Smith, and “Pickaninny Heaven.” Smith’s 1939 version of “God Bless America” had been in the rotation at Yankee Stadium since the team began regularly playing the song following the Sept. 11 attacks in 2001.

Are those song titles offensive?

Can they be excused merely because of context?

Still, it isn't exactly a closely-guarded secret that America in the 1930s had a lot going on in regard to race that we now find horrifying. The Yankees have been playing this song since 2001 and no one was flooding their front office with complaints about Kate Smith's (who has been dead for over thirty years, by the way) racism.


I would wager that's because almost every American over the age of five in 2019 knows that the country has a most troubled past when it comes to race.

I wish there was a list somewhere of stuff I am supposed to be offended by so I could keep up with it all.

I didn’t even know I was offended by this song but now I do.

RE: I didn’t even know I was offended by this song but now I do.

I don’t think it is the song that offends these snowflakes, it’s the woman who first sang the song and made it a big hit that they’re offended with.

When are they going to start removing statutes and plaques of baseball heroes that might have been racist?

Mark Steyn, filling in for Limbaugh, said that even black singer and communist, Paul Robeson, sang “That’s Why Darkies Were Born”.

I used to be a huge Yankees fan 40 years ago. After MLB’s third strike, and then NYY’s departure from the erstwhile “new” Yankees stadium, I haven’t wanted to watch even post-season baseball anymore.

This is getting more and more absurd every day.... 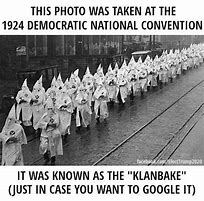 “The past must now be punished, for not being the present.” - Mark Stein today. Rush’s best fill-in host!

“Woke” Amerika 2019… tear down statues, rename buildings and scrub history for daring not to conform to “woke”! In modern PeeCee world… we must live only in the constant NOW!

Fine print: All morality and standards are subject to change without notice! What was PeeCee yesterday maybe “bigotry” today… this “woke” thing is a moving target… pay attention or pay the mob!

They want to do a reboot like the Khmer Rouge and go to “Year Zero”.

and robert bird a grand wizard in the KKK led the left and/or was a highly influential senator for how many years in congress?

What time is it now? Shortly after this post, then.

The documentary series by Ken Burns had one on wrongs against African Americans by baseball, then on Latinos, etc.

Summary: white racism flowed in gushes from Ty Cobb down to anti-Hank Aaron hate mail. All whites in the country are racists and baseball shows that.

That is one step from destruction of statues and placques. We'll be lucky to be allowed to have one token American flag in a ball park soon. It will be in an inferior position to a BLM,Black Panthers, Feminist and LGBTQ flag row above them.