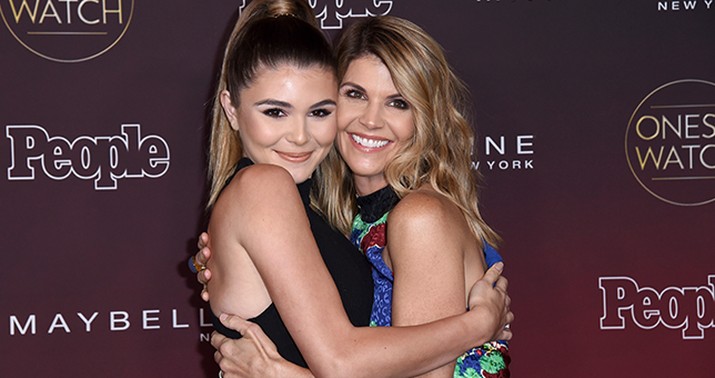 Or so “sources” say, but how can this story not be true? I made the same point in a post last week. Lost amid the outrage over rich parents buying college seats for their dimwit children is the fact that Lori Loughlin’s daughter Olivia was doing quite well for herself as a social-media “influencer.” If you can pull a million views for a video, as she could, you can make serious money from that alone. If you can bring a sponsor’s products to an audience of that size, as she routinely did, you’ve got serious ad money on top of it. How serious? Page Six talked to an expert in the field a few days ago.

“We’re estimating … she’s probably making a minimum of $30,000 for a post on Instagram. It could even be upwards of $50,000,” said Cartin, who has not seen any of Giannulli’s contracts.

And those totals don’t account for a cut in sales she likely receives from her sponsored-content posts.

“She’s more than just a regular influencer — she has that celebrity hook with her,” Cartin said.

Giannulli has 525 Instagram posts in the bank (pun intended) as I write this and scores of YouTube uploads, virtually all of which have hundreds of thousands of views. She was rolling in dough without even taking into account whatever money mom and dad had set aside for her in a trust fund or whatever. The trust fund is presumably still intact but the social-media income stream is momentarily at a standstill — and, with corporate sponsors like Sephora and Tresemme dropping her, the corporate sponsor stream seems to be up in smoke.

All of which raises a tantalizing possibility: Could Olivia Jade sue mommy and daddy for wrecking her social-media career by embroiling her in a harebrained fraud scheme to get her into a college she didn’t even want to attend?

It’d be the civil suit of the century.

Lori Loughlin’s daughter Olivia Jade is reportedly furious with her parents after the Full House actress and her husband were charged in the college bribery scandal.

Sources say Olivia, 19, had begged her parents to let her focus on her career as a YouTube vlogger and Instagram influencer, but they pushed her to go to school.

Now, after being dropped by major brands including Sephora and TRESemme, Olivia believes ‘they have ruined everything’.

“She told them she did not want to go to college and she was pushed,” complained a friend to Entertainment Tonight. “Now she’s devastated because everything she built implode before her eyes.” That’s sort of funny and sort of sad. Sad in the sense that if it’s true that Giannulli didn’t know what her parents were up to then she really is an unwitting victim in all this and funny in the sense that, er, it’s obviously not the case that everything she’s “built” is gone. The kid is 50 times more famous today than she was a few weeks ago. Her first clip posted to YouTube after this all shakes out will doubtless draw many millions of views. If she’s cleared of involvement in the bribery there may even be some public sympathy for her, partly because her parents exposed their child to public ridicule and partly because she’s, er, clearly not that bright if mom needed to grease some palms to get her into USC. I keep joking that she’ll come out of this with her own reality show but it’s not a joke. She will.

Assuming she doesn’t go to prison, I mean.

One of her girls, Olivia Jade Giannulli, 19, is “terrified that she may end up in jail too,” a source close to the YouTube star EXCLUSIVELY tells HollywoodLife.com.

“She is upset with her family for putting her through this and can’t help but blame her parents for getting her into this mess,” the source tells HollywoodLife.com. “Olivia has been an emotional wreck all week and has been fighting back the tears daily. She doesn’t want to go to jail and feels like none of this was her idea, so she is freaking out.”

Giannulli must have the basic sense to understand that she isn’t in jeopardy if she honestly didn’t know about her parents’ scheme, which makes me think she probably did know and went along with it. Grudgingly, perhaps, given her antipathy to college coursework but willingly nonetheless. In any case, she’s not going to be sent away for a crime masterminded by her parents, particularly considering how reluctant she was to have them pursue it in the first place. She should worry less about jail time and more about what it’ll do to her image if it’s proved that she participated in the fraud. The key to rebuilding her social-media career is sympathy. Sympathy will be hard for a verrrrrrrrrry privileged girl to achieve under any circumstances. Culpability will make it that much harder.

I’m only joking about her suing them too, if for no other reason than that she and her sister presumably stand to inherit mega-bucks from mom and dad so long as they’re on good-ish terms with them. You may think Loughlin’s not loaded since she’s not an A-list actress but her husband Mossimo is a successful clothing designer worth upwards of $80 million by some estimates. The family home in Bel Air was listed two years ago for $35 million. There’s nothing Olivia could win in a civil suit, I suspect, that’d make it worth her while to alienate her folks and risk losing half of that down the road. Worst-case scenario: She never rebuilds her online presence and somehow has to try to find happiness with tens of millions of dollars in the bank to break her fall.

There’s a big difference between “none of this was her idea” and not knowing about or going along with it.

Olivia, turds are flushed down the toilet. Welcome to the real world.

If the daughters knowing signed anything (for example, their SAT test forms?), that contributed to the fraud, then they WERE aware of the crimes being committed, and should also be held accountable/punished. IMHO.

As for claims that the scandal may have negatively impacted her Instagram and/or YouTube income, that is pretty unbelievable to me.

Then she also has to be careful with how much she wants to blame them, publicly or privately.

It’s proper that people focus on her or the civil liability quesiton, but my take is totally different:

Looking at what passes for normal on most campuses these days, why should it be that most kids still go off to college for 4.5 years for $100,000 or more..?

It’s not just the fake majors that don’t help you get a job.

It’s the War on Civilization.

Her college was USC, but it’s not just USC with that problem.

This young woman does not appear to be mentally prepared for college, and she does not appear to have wanted to go - she was pressured into doing so by helicopter parents who bribed her way in. She is a dunce, she is happy to be a dunce, and there’s nothing wrong with that - there are far too many dunces with worthless college degrees in useless majors (aka Democrat voters). The nation would be better off if dunces were not pressured to attend college and could be free to do stupid things without a degree giving them cover as “educated” or “elite”.

If she had absolutely nothing at all to do with it, she might be able to go after her parents, but while some of the kids involved in the scandal legitimately didn’t know anything, she is one of the ones that did have some knowledge and went along with it, so, oh well.

Kim Kardashian’s break-through to fame was a “leaked” porn-video.

This kid runs in the same Hollywood whore circles, has the same look and has already garnered the same audience. If she is truly clever, she will use this scandal to also launch her name to a wider audience.

Remember, all publicity is good, and the worst thing is not being talked about at all.

A new story out has a classmate wondering how this one was able to youtube incessantly
AND be a successful student with a heavy class and homework schedule.

CONCLUSION: So it appears, the bribery must have included a guaranteed “USC diploma.”

If USC is giving out diplomas for bribes, they need to be indicted ........ and have all tax dollars cut off.

I wonder if this ungrateful sad egotistical brat realizes that the business she founded was based entirely upon the fame and access of her parents? I also recall hearing something about sitting for a fake photo on a rowing machine to demonstrate her crewing ability. To me that sounds like a co-conspirator. In any event, life is not fair. The earlier you learn that, the better for you.

None of their degrees mean anything at this point.

If there’s one there’s more than one.

Right. Though of course she is technically an adult with her own income.

The issue would be if she knew she was submitting a fraudulent application and went along with it. Saying it wasn’t her idea is not exactly a denial of knowing and going along with the plan.

This story confirms WHY these parents felt the need to fix the system for this girl. Sharp as a bowling bowl.