“Not sure what the pushback is. The MORE people introduced to getting high, the more heroin addicts we will eventually see.”

Yep, I’m pretty sure my first cup of coffee started me on the path to heroin addiction. Somehow, though, I’m still not a heroin addict. Amazing.

Where I think the “gateway drug” narrative makes some sense is the idea that people who’re willing to break the law and take some risks are (wait for it) generally willing to break more laws and take more risks. Nothing to do with the effects (or lack thereof) of any particular drug.

The government also greatly contributed to the problem by demonizing pot, so when folk actually tried it the usual reaction was “Why the hell is this stuff illegal?”. It’s easy to see how that might affect views on other drugs.

Legal marijuana will be fine, somehow the Netherlands and Alaska have survived.

“Like Prohibition or not but after it was repealed the amount of alcohol related deaths, diseases and social dysfunction sky rocketed. sorry but it really happened”

On the contrary, figure 1 (page 11) at https://pubs.niaaa.nih.gov/publications/Surveillance93/Cirr09.pdf shows cirrhosis deaths flat until 1950.

The full article is here: https://getnewsviews.com/health-fitness/marijuana-is-more-dangerous-than-you-think/

You are just plain wrong. The amount of alcohol related trauma (car accidents,drownings, falls etc) rose considerably after the repeal of prohibition. Illegal drug use, including extensive marijuana use, has been a disaster for this country in every way imaginable. Try speaking to a mother or father who lost a child to drug use or the effect it has had on families and entire communities. Then again trying to convince people who’s brains are soaked with cannabis is foolish and futile. They do not have the capacity to comprehend and are not worth the time. Just wish they didn’t procreate, but they do.

So you claim - yet I'm the only one who's posted any evidence, which goes against your claims.

You can smell it. Most weed is bought from a known person. They still sell untaxed ditch weed in Colorado. As a matter of fact, they may sell more untaxed than taxed. $80 for an 1/8 is pretty high.

I don’t drink. Alcohol does more damage than good. We would be better off without it. BANNING things doesn’t work. ENDORSING the recreational use of marijuana won’t help a thing.

ENDORSING the recreational use of marijuana won’t help a thing.

Nobody here endorses use or supports such endorsement - we simply want to cease banning it, which you agree doesn't work.

I am 100% against the federal prohibition of cannabis.

I am 100% for states deciding the issue for themselves.

How does the ‘known’ person know where it comes from? Who grows it and even what country it’s from? There are no guarantees how many hands it’s passed through.

The libertarian in you wants to limit the freedom of others? I don’t think limiting other people’s freedom is correlates with libertarianism.

I think you meant to say authoritarianism. This term better represents your willingness to dominate and steal other people’s freedom in order to prevent them from doing something that doesn’t fit your beliefs. Are you going to take away cars, guns, and alcohol next because they are strongly correlated with disease, injury, and death?

Moreover, you support a nanny state that protects the citizens from themselves. “I believe that this is bad and for your own good I am support someone taking your freedom away.”

I’m not sure what form of libertarianism you adhere to but please keep it away from me.

The libertarian in you wants to limit the freedom of others?

Probably the same holds true for the food you get at a restaurant. The point is that the government will make more money and it will be safer if they lighten up on the taxes. If it does get legalized here, I’ll just grow it myself. It’s not that hard to do.

I have tried it in 30 years. It may not be all that. I rarely smoked it before then. It just made me sleep really well. That comes in handy when you are 60.

Coffee use is getting high in your world? Thanks for confirming that you aren’t really serious on this issue.

You are not a heroin addict. Have you talked to a heroin addict? The one I lived with said the problem started when he FIRST got HIGH smoking pot. I believe him.

You can do whatever you want. Go ahead and smoke pot. Get together with your whole family and make it a family tradition. I am sure nothing bad will ever happen.

At least educate yourself though:

“How is marijuana potentially harmful?

Marijuana has potentially harmful effects in the short-term and long-term on physical and mental health.

While intoxicated by marijuana, the following effects can be observed in users:

Repeated use of cannabis over a longer period has been associated with longer-term problems that may include:

On the one hand, research does support the positive effects of cannabis in treating chronic pain conditions (while not as strong a relief in the short-term for many, the probability of developing hypersensitivity to pain seems to be reduced with THC when compared to opioids).

On the other hand, the research on the potentially harmful physical and psychological effects of cannabis use is hard to ignore. Marijuana is damaging to the developing adolescent brain, and it can lead to Cannabis Use Disorder (or addiction).

However, the causal link between cannabis and ‘harder’ illicit drug use is still unclear....”

Go ahead roll the dice.

Obviously you’re for legalizing it....so we’ll be able to find all sorts of reasons to support what we think.

I had one guy say it’s just a plant or organic and most drugs you take for illness comes from those.......true,... but they can kill you and mess up your body as well....even kill you.

That doesn't change the fact that it's nearly impossible to have an illegal, untaxed tobacco farm that can put out a large volume of product. The government LONG ago made this impractical. Legal tobacco farmers turn in those who try to game the system. There isn't large scale illegal tobacco production EXACTLY because the government makes it unprofitable, illegal and nearly impossible to gain any type of market share. The BATF goes even goes heavy against those who try to game the system by buying cheap cigarettes in one state and trying to resell them in another. There's a GOOD case to be made that the BATF (ALCOHOL, TOBACCO and FIREARMS) was setup specifically to protect these products LEGALLY and make it impossible for large scale illegal production.

So why aren't OD rates skyrocketing in states that have legalized? They are doing better overall with respect to ODs than prohibition states. See CA and OR, for example => 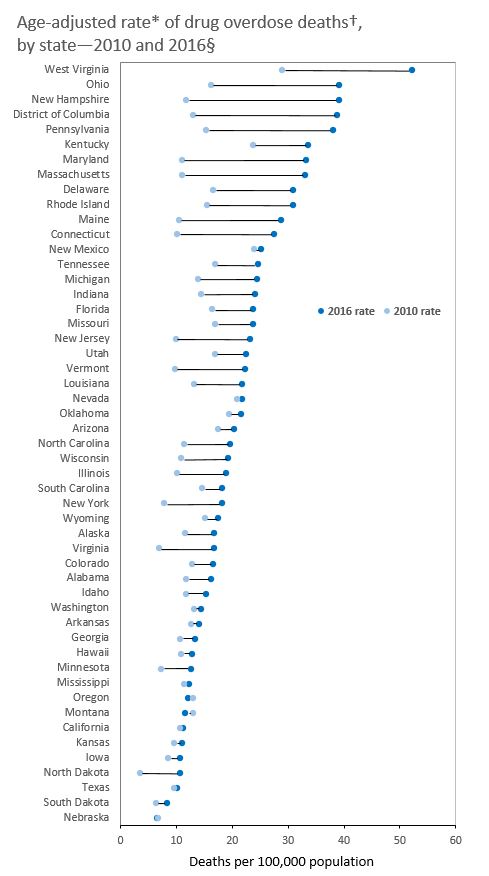