From an Anonymous Tip to an Impeachment: A Timeline of Key Moments in the Clinton-Lewinsky Scandal
TIME ^ | May 4, 2018 | By OLIVIA B. WAXMAN and MERRILL FABRY

In June 1995, Monica Lewinsky’s move to Washington, D.C., was unremarkable. She was a 21-year-old recent college grad with an unpaid internship in the office of President Bill Clinton’s Chief of Staff Leon Panetta, landed with the help of a family connection. But, as the nation later learned, things happened quickly from that point, as it was that year that she began a relationship with the President that would last about two years and lead to an epoch-shaping scandal.

The relationship between Lewinsky and President Clinton came to light 20 years ago, and the fallout would dominate 1998’s news.

And even 20 years later, the scandal continues to serve as a reference point for American politics, from Lewinsky’s tweets — for example, her quip that “blaming the intern is so 1990s” after Sen. Marco Rubio called out a journalism intern over a story — to President Trump’s addition of Clinton impeachment lawyer Emmet Flood to his own legal team. Below is a glimpse, with two decades of hindsight, at how that historic year unfolded. 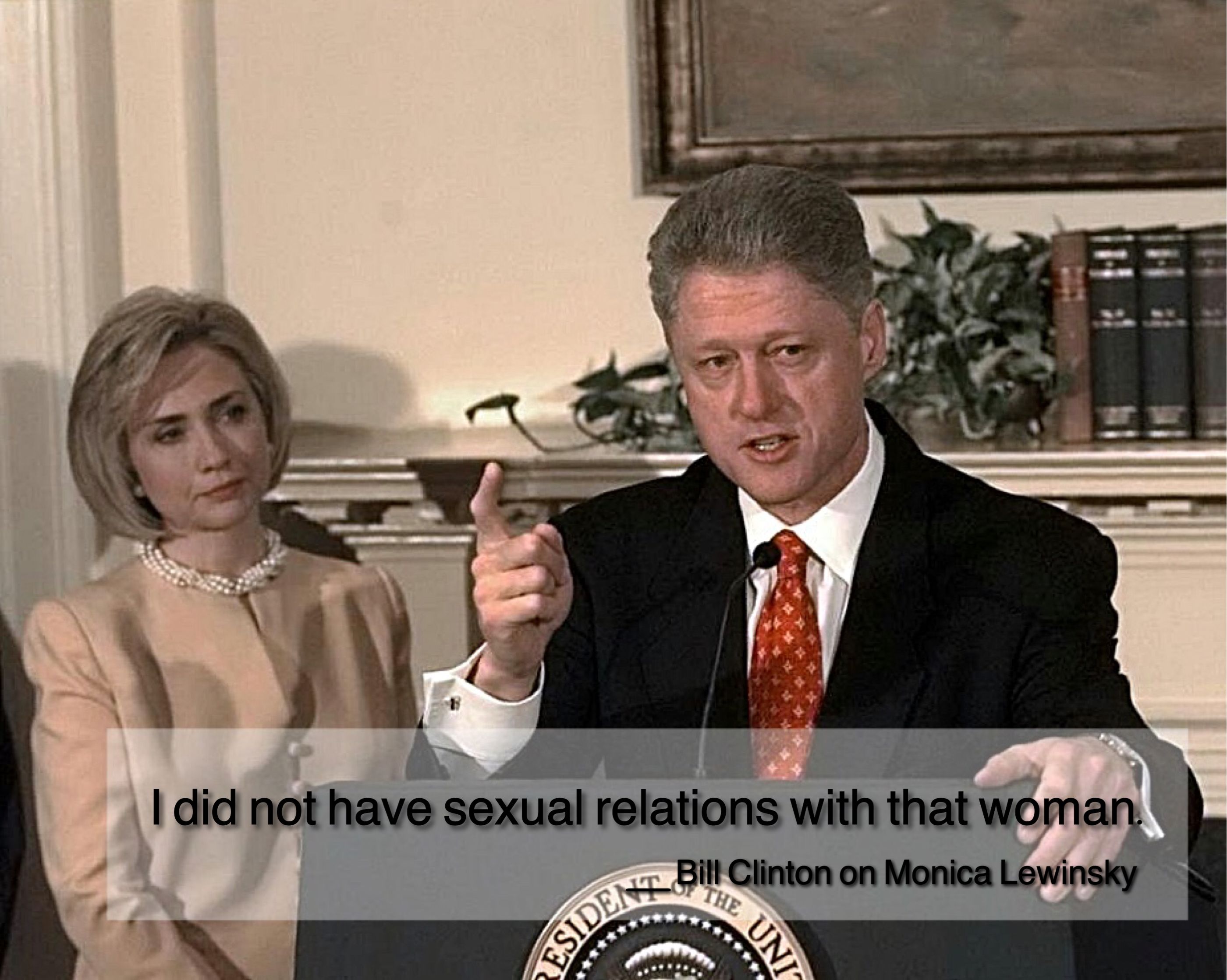 Even 20 years ago, Time was little better than a gossip rag trying to stay relevant.

Bill was sitting there innocently enough in the “O office” with a big “S eating G” on his face. Lewinsky accidentally tripped and somehow snagged on his “clothing Z”, pulling it down, while also connecting to his “clothing U/W” resulting in movement in the same direction, subsequent to this brushing up against his “part P” so magically, that there was an instant “bodily action E” and her “part M” fell on it.

Of course the resulting recoil caused near instantaneous “action O”, of which he has been ever so proud these many years.

As the startled intern arose to compose herself, she could be forgive for a fluid malfunction impacting her blue dress.

And of course we unfortunately have to tell what was was, so we know what is is.

Just goes to prove what you would get if you were to drag an open “bodily part M” through a Clinton trailer park.

The Democrats believed then and they believe now that Monica Lewinsky was “just fantasizing” in her 20 hours of taped conversation in which she reportedly detailed her sexual relationship with the president and begged Linda Tripp to join her in lying about the relationship.

Democrats believe that any gifts, correspondence, telephone calls and Lewinsky’s 37 post-employment White House visits that may have passed between her and the president are evidence only of a platonic relationship.

Democrats believe that such innocent intimate friendships are quite common between middle-aged married men and young single women, particularly between presidents of the United States and White House interns giving out blow jobs to get ahead.

They see nothing suspicious in the report that the president’s intimate pal, Vernon Jordan, arranged a $40,000-per-year job for Lewinsky shortly after she signed but before she filed an affidavit saying she had not had sex with the president.

Nor did Democrats read anything significant into the fact that the ambassador to the United Nations, Bill Richardson,
visited Lewinsky at the Watergate to offer her a job.

The Democrats firmly believe the instructions Lewinsky gave Linda Tripp informing her on how to properly perjure herself in the Willey matter “simply wrote themselves.”

Democrats believed Hillary when she asserted Bimbo Eruptions needed to be put down and they approved of Hillary using tax dollars to establish an office in the WH that lacerated, demeaned and marginalized any woman who dared accuse Hillary’s husband of sexual improprieties. 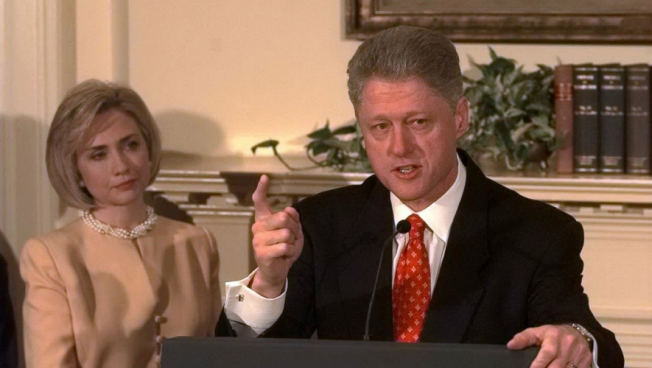 “I never had sex with that woman…....Miss Lewinsky.”

And the other one swears to it. As I recall, Team Clinton made much of the definition of sex posited by the investigators, which included the phrase “touching with intent to gratify.” BillyJeff testified that he never intended to gratify Monica, so it wasn’t sex, at least on his part. This is how you can become a feminist icon on the left.

What fools (and hypocrites) these mortals be. Two decades have passed since Linda Tripp blew the whistle on sexual hijinks in high places with her tapes of Monica Lewinsky, the young intern who described to her confidant and colleague the passionate ordeal of a sexual liaison with the president of the United States. She blew the whistle, she says, to protect her friend. Twenty years on, she’s still a villain for many women who remember those times.

But history’s on her side.

Tripp withdrew to a private life after the scandal, and now she comes in from the cold to reappear on a changed landscape littered with the likes of Harvey Weinstein, Matt Lauer, Kevin Spacey and Charlie Rose. She suggests that former President Bill Clinton should take his place on the pedestal of predators with current celebrities of stage, screen and politics.

“When the president gets a pass for something that egregious,” she tells DailyMailTV, “he essentially gave tacit permission to all those who followed to do the same.”
In the revival of memories of those dark days of revelation, Tripp emerges as the heroine before her time was ripe, who went out on a fragile limb to protect a friend who would hate her for what she was doing. “He was the leader of the free world and she was an intern, a kid, who happened to be extremely emotionally young for her age,” she says of Lewinsky. “This was part of his pattern where women were a means to an end. It was almost a servicing agreement, but she romanticized it.”

Although Bubba didn’t lose his job, as many of the current batch of exposed alleged offenders did, one U.S. senator, Democrat Kirsten Gillibrand of New York, now says he should have. She thinks he should have resigned in shame. Now armed with fresh attitudes about sexual harassment, other women are reassessing their earlier conclusions.

The reassessment should put Tripp on the side of the good angels, but she told The Weekly Standard, “It’s a day late, and it’s a dollar short.” She wants to know what information the reassessors have today they didn’t have 20 years ago. The reckoning isn’t about black and white, left and right, but about right and wrong. Anyone familiar with the record remembers hearing how Lewinsky naively asked Bubba, “is this just about sex ... or do you have some interest in trying to get to know me as a person?” The plaintive cry of the child emerges.

But she had no appeal to sympathy when The Drudge Report broke the story in January 1998 with the power of a rotten egg, or when Hillary Clinton went on the attack on NBC’s “Today” show in January 1998. The accusations against her husband, Clinton said, were merely the work of a “vast right-wing media conspiracy.” The abuse of a young woman by a male boss twice her age was reduced to partisan politics.

The even vaster left-wing media conspiracy joined the White House and closed ranks with the first lady and the president, as they treated Lewinsky and Bubba’s “bimbo eruptions” like clay ducks in a shooting gallery. Maureen Dowd of The New York Times called the White House approach “a slander strategy.” But she observed, “at least some of the veteran Clinton shooters feel a little nauseated this time around, after smearing so many women who were probably telling the truth as trashy bimbos.”

One reader says writing about the Clinton scandals is “so yesterday.” Why bother with a rehash of the Clintons in the White House? But news of the Clintons is never yesterday’s news. Their story demonstrates over and over how power and the press create villains and heroines with exaggeration, distortion and truth rearrangement.

When Lewinsky decided to go public with her remembrance of things past four years ago in Vanity Fair, she learned how personal humiliation fits with our culture of humiliation, where gossip and half-truths take root on the internet, where nothing ever dies and instead festers on social media, giving everyone an opportunity to revel in schadenfreude.

With a 24/7 news cycle hungry for something, anything, to feed the hysteria for tales of the lowest human experience, the world in which Monica Lewinsky lived 20 years ago is revealed as the same world we live in today, only more so. The power centers are occupied by a different cast of characters, but everything is familiar. Amazon Studios has acquired the rights for a movie to be called “Linda and Monica,” to explore the intimate, confidential recorded telephone conversations about Bubba. It’s coming soon to a theater near you.

Herewith, for your edification, are the Certified Democrat Degenerates......the scum that vilify and destroy America's Judeo-Christian ethics and values in movies promoted as being "diverse, politically correct, and socially relevant."

<><> How did the Hollyood elite list payments to Clinton's sex defense fund on their corporate statements AND on their tax returns? 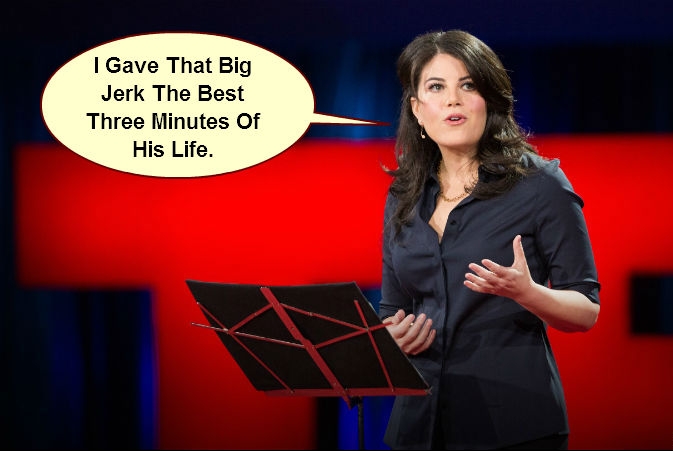 Yes, I know how he twisted truth, with the media backing him all the way.

Biggest result of it was that it got Hillary the inside track in the Democrat party for standing by her man.

It got her the nomination in 2016. And that was a good thing.

And liberals who just luuuuve the Clintons and wanted Hillary (the chief enabler of sexual assaulted and rape of women by her husband) to be president have the utter gall to criticize and hate Donald Trump for the way he treats or speaks about women. As far as I know, Trump has not assaulted or raped anybody.

That's how low they are.

I didn’t think so at the time.

She has an evil, scheming look in her eyes.