George Soros' alleged meddling in European politics has caught the attention of Congress.

Concerns about Soros' involvement most recently were raised by the Hungarian prime minister, who last week lashed out at the Soros "empire" and accused it of deploying "tons of money and international heavy artillery."

But days earlier, Republican lawmakers in Washington started asking questions about whether U.S. tax dollars also were being used to fund Soros projects in the small, conservative-led country of Macedonia.

TOPICS: Crime/Corruption; Foreign Affairs; Government
KEYWORDS: 201702; astroturf; communistparty; corruption; hungary; macedonia; osi; soros; sorosorgs; stopsoros; usaid Navigation: use the links below to view more comments.
first 1-20, 21-27 next last
This could get interesting. Work with foreign governments to take him down and cut off his funds.
1 posted on 02/18/2017 9:38:36 AM PST by nhwingut
[ Post Reply | Private Reply | View Replies]
To: nhwingut

Ask Hungary. I’m sure their Soros file is extensive and detailed.

There is seemingly no end of leftist peeps and orgs funded by the Feds.

3 posted on 02/18/2017 9:41:34 AM PST by Paladin2 (No spellcheck. It's too much work to undo the auto wrong word substitution on mobile devices.)
[ Post Reply | Private Reply | To 1 | View Replies]
To: nhwingut
Soros at at the center of so much evil: human trafficking, Satanism, globalism, murder, money laundering - you name it.

The spiritual battle of Ephesians 6:12 is at play here on the earth.

“There is seemingly no end of leftist peeps and orgs funded by the Feds.”

Makes one wonder if Trump/Congress could balance our budget in a couple of years by defunding the above and reducing the federal labor force by a minimum of 25%?

Excellent. Let’s get to the bottom of this and neutralize this anti-American traitor.

So we still have Obama appointed Ambassadors on duty? They should all have been fired/had their resignation letters accepted weeks ago. A caretaker charge d’affaires could run things until new ambassadors are appointed.

Excellent. Let’s get to the bottom of this and neutralize this anti-American traitor.

By the Feds and the Fed, both channeling through fronts.

Soros is a front as well acting as a conduit for some nasties behind him.

Congress is going to have to treat this very, very carefully - a number of members of Congress are already beholden to Soros for much of their funding and logistical support at the ballot box.

After all, he already has one political party as his wholly owned subsidiary, and a good deal of those organized gangs of thugs, the Street People (Occupy Wall Street, Black Lives Matter, Dreamers, Muslim Brotherhood). The Deep State is also greatly indebted for both funding and operational direction.

Prime Directive - reverse the results of the 2016 election in as many places and in as many ways as possible, and declare libertarian-conservative-Republican affiliation to be criminal conspiracy.

A malefactor of great wealth. Nicolae Carpathia of the “Left Behind” series becomes not simply a work of fiction. The real-life counterpart may already exist.

And this is without even GOING overseas.

I’ve often wondered if it might have been Soros who paid the Russkis to “hack” the election so the commie left would have an excuse if President Trump kicked Clintoonie’s @$$ at the polls.

What prevents Hungary or some other nation filing charges and seeking the extradition of Mr. Soros?

http://www.thegatewaypundit.com/2016/11/soros-funded-orgs-behind-violent-anti-trump-protests-across-america/
13 posted on 02/18/2017 9:56:27 AM PST by amorphous
[ Post Reply | Private Reply | To 1 | View Replies]
To: nhwingut
George Soros' alleged meddling in European politics has caught the attention of Congress.

Boy oh boy they are right up front on world events. Everyone has known of Soros' involvement in governments for the last generation and just NOW our addled brained do nothing representatives have learned about him? DRAIN THE FRIGGIN' SWAMP!

I wish something would come of this but I doubt it as Soros has given so much money to both Rino’s and Rats. 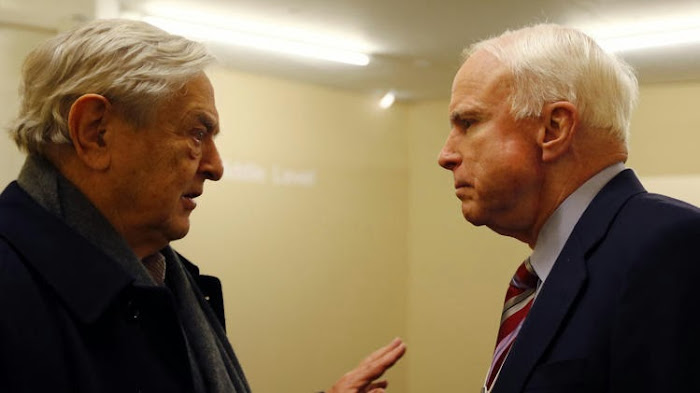 [[But days earlier, Republican lawmakers in Washington started asking questions about whether U.S. tax dollars also were being used to fund Soros projects]]

IF so- all those involved need to be brought up on charges, and every last cent paid back to the American Taxpayer in an IRS refund check


For as long as I can remember, whenever I see "Lawmakers probe" or "investigate" or "Look Into" or whatever....

...the subject of that investigation quietly fades from memory and just continues business as usual.

19 posted on 02/18/2017 10:28:48 AM PST by IDontLikeToPayTaxes
[ Post Reply | Private Reply | To 1 | View Replies]
To: All
Trump's Master Plan----nudging his yet-unnamed ambassadors to urge the respective countries to look into their govt's dealings w/ the Clintons and the nefarious Clinton Foundation:

<><> the Clintons meddling in foreign elections,

<><> deals for Clinton cronies and insiders...and so on.

These same ambassadors might also be nudged into looking into Soros' foreign activities. The buzz is Soros established "non-profits" in about 1000 foreign localities.

Soros numerous n/p's should be scrutinized as to an electronic/paper trail for money-laundering, tax-evasion, govt fraud....and so on.

Soros needs to be exposed.

Podesta-Soros Master Plan - How To Take Over America - 2008 And Beyond!
Common Sense Evaluation / FR Posted by gaggs

Wikileaks Email ID 59125 exposes Hillary's campaign manager, John Podesta, and George Soros Master Plan on how to take over America in 2008 and beyond!

It’s all there in the memos, the whole scheme… taking over the economy, protracted war, dividing Americans and controlling the media. (Excerpt) Read more at commonsenseevaluation.com ...

The crucial point here is that arch-villains Hillary, Podesta and Soros are linked together. Soros has been under the radar much too long.