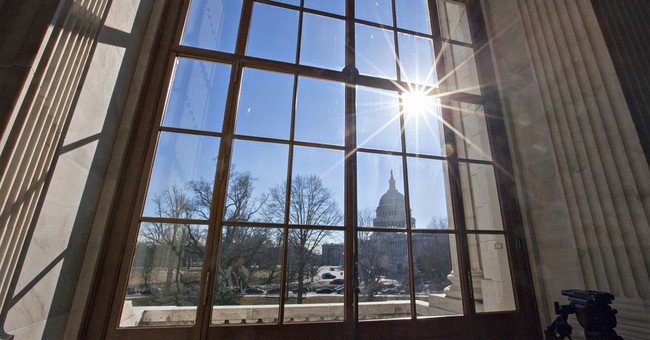 If you had any doubt whether or not Obama’s politicized DOJ was deliberately targeting conservative elected officials, this should confirm your suspicions. The US Supreme Court overturned a convictionin June against former Virginia Governor Bob McDonnell for bribery. This was extremely significant, because the decisionwas unanimous — even all the liberal justices on the court agreed the criminal charges were a sham. Writing the opinion for the court, Chief Justice Roberts saidthe prosecutors had taken an overly broad interpretation of federal bribery law, and that if the court had allowed the conviction to stand, it would have made it extremely difficult for elected officials everywhere to perform their basic job duties.

While serving as governor of Virginia, McDonnell and his wife accepted $170,000 in gifts and loans from a wealthy businessman, Jonnie Williams. Williams said later when pressured in court by prosecutors that he was hoping to get a contract with the state for his dietary supplement business.

Now, it is perfectly normal and legal for wealthy businessmen and women to contribute thousands of dollars to politicians, it happens every day. It is also perfectly normal and legal for those same businessmen to apply for government contracts; this also happens every day, all across the country and at all levels of government (perhaps there are some levels of local government who have made it illegal). Williams never did get a contract, and after the outcry, the McDonnells returned most of the money to Williams.

Obama’s DOJ didn’t care, but singled out McDonnell anyway, getting a jury to indict him on felonies of honest services wire fraud, obtaining property under color of official right, and extortion under color of official right. As Sol Wachtler, former chief judge of the New York Court of Appeals once said, prosecutors now have so much influence on grand juries that "by and large" they can get them to "indict a ham sandwich." A former manager for the DOJ at the US Attorney’s Office in Phoenix admitted to me recently that they joked about it being the “Department of Social Justice” due to the political targeting orders they received top-down from the Obama administration.

People all over the country were so appalled by McDonnell’s conviction that numerous organizations and prominent officials filed or joined in on amicus curiae briefsto the US Supreme Court on behalf of McDonnell. The list included over 51 former attorneys general, multiple law professors and former federal legal officials, like Democrat Lanny Davis, who was Special White House Counsel under Bill Clinton. Even former officials with the NAACP — not known for their love of conservatives —filed an amicus brief.

The US Supreme Court ruled in June that the prosecution erred by classifying virtually everything a politician does as an “official act.” The court held that “[s]etting up a meeting, talking to another official, or organizing an event — without more — does not fit that definition of ‘official act.’” What’s additionally necessary to violate the bribery law is “the Government must prove that the public official made a decision or took an action ’on’ that ‘question, matter, cause, suit, proceeding or controversy,’ or agreed to do so.“ There was no evidence of this with McDonnell; he did virtually nothing to assist Williams with getting a government contract.

Incredibly, instead of adhering to the decision, The Washington Postreportsthat DOJ prosecutors recommended on September 2 to refile the charges against McDonnell.

Yet the SCOTUS decision is already affecting similar cases around the country. A county prosecutor in Utah saidhe was dropping similar criminal charges against former Utah Attorney General John Swallow in part due to the decision.

Fortunately, the tide is finally turning when it comes to misusing nebulous criminal laws to target conservative elected officials. As I've written about previously, prominent criminal defense attorney Harvey Silverglate wrote a book entitled Three Felonies a Dayin 2011, about how the average American commits three felonies a day and doesn’t know it because the number of federal laws and regulations have grown so much — by the thousands every year — and are so vague that no one has any idea what they are. Nor should they, because many are impossibly — and unconstitutionally — vague. If the government wants to get you, it can.

Eerily, it is the same mere handful of laws that are almost always used to target and take down conservative politicians. According to Silverglate, they are wire fraud, mail fraud, securities fraud, racketeering, fraudulent schemes, conspiracy, obstruction of justice and bribery.

Let’s look at just one of those. Wire or mail fraud merely means someone used a phone, email or the United States Postal Service to send communications with the (vaguely worded) intent to “defraud.” McDonnell was convicted of wire fraud. But let’s look at how ridiculous this felony really is. McDonnell’s phone call or email was used to tack on an additional felony count of wire fraud — despite the fact it was not an additional bad act. Additionally, since wire or mail fraud are federal felonies, they can be used to transfer a state crime prosecution into federal court — in order to ensure that DOJ prosecutors will try the case, not local prosecutors who might not be receiving marching orders from the Obama administration.

Silverglate notes how felonies used to require intent; now, that element of a crime is mysteriously disappearing from jury instructions. Another abuse is fishing expeditions; with unlimited pockets from the taxpayers, DOJ attorneys can force a defendant to accept a plea offer of guilty because the hounded official can no longer keep up with millions of dollars in defense attorney fees to respond. As of January earlier this year, former Texas Governor Rick Perryhad accumulated $2.5 million in legal fees defending against a sleazy prosecution. So many prominent conservatives have been targeted under Obama’s administration and by other Democrat-controlled prosecutors’ offices, that I have compiled quite a long list of stories on many of them over the last couple of years: Rick Renzi, Joe Arpaio, Tom DeLay, Dinesh D’Souza, Ted Stevensand Charles Sebesta.

How much does McDonnell have to suffer, merely for being a popular Republican elected official? He has lost his finances, his reputation, his career and maybe his wife; after everything the two have been through including despicable rumors about her and Williams, and her related prosecution.

Was it wise of the McDonnells to accept expensive gifts from Williams? Probably not. But it is not a crime. If you are living a well-heeled lifestyle, you’re not going to think much about friends giving you nice gifts. Contrast McDonnell with Rep. David Schweikert — who ironically looks a bit like McDonnell. When I worked with Schweikert at Maricopa County, when he was the county treasurer, he wouldn’t even let me pay for his coffee when we took coffee breaks at Starbucks — so I got a lot of free coffees. But Schweikert does not come from a wealthy background and so perhaps is more sensitive to the appearance of receiving nice gifts as an elected official.

This is all part of a nefarious scheme by Democrats to make Republican politicians look as corrupt as Democrat politicians, so they can dismiss Democrat corruption as, “well, everyone does it within both parties.” This is false, since a much higher percentage of Republican than Democrat politicians come from Judeo-Christian backgrounds, with significantly stricter morals drilled into them, as well as far more severe consequences should they mess up.

It is far overdue to stop the wrongful selective targeting of Republican politicians, making an example of them and ruining their lives, simply in order to let crooked Democrat politicians off the hook and make Republicans look bad. Fortunately, with the SCOTUS McDonnelldecision, it is clear there is bipartisan support to get rid of these unconstitutionally vague criminal laws, which Congress needs to repeal during the next administration when Obama is gone, as well as clean up the corruption in the DOJ. And when are the DOJ prosecutors going to be prosecuted themselves for wrongful prosecutions?

If anything should be done to curtail political contributions, make this kind of activity into a civil offense. But a criminal felonypunishable by prison? McDonnell is a fairly knowledgeable politician, he knew the laws better than most of us in this area. What he did was wasn’t against the law. If his behavior should be made illegal, then perhaps create a civil violation for future offenses. But to destroy his life in a targeted, criminal political witch hunt over something that wasn’t even against the law goes against our country’s tradition of justice, whether you are a Republican or Democrat.

Can someone say, “double jeopardy”?

Is this inquisition against McDonnell intended to draw fire away from Kaine? how much in gifts did he accept when he was Governor?

Good to know the Supreme Court can be overridden.

Can you say Obama care?

The DOJ is no longer just politicized. It is weaponized.

They won’t go through with it. They just want to disgust enough independents in Virginia to swing the state to Hillary.

But Hillary is fine. Nothing to see there.

The double standard is again the policy of a corrupt DOJ.

As the article perceptively states, this is “all part of a nefarious scheme by Democrats to make Republican politicians look as corrupt as Democrat politicians”.

This scheme is not all that different from their scheme to use the IRS to target conservatives. Once again a federal agency is being used as a political weapon. Chilling stuff.

Democrats will stop at nothing to hold on to power.

So?....How much did this cost McDonnell? Is he bankrupt yet? How many years of anxiety and lost sleep for him and his family?

For Democrats, they don't really care about a conviction. The punishment is subjecting their political enemies to the legal system.

If Trump doesn’t within the first 30 days replace the top three layers of every Federal department and agency, they will work tirelessly to undermine his administration. They are corrupt to the core and the bureaucratic barns need to be cleaned out asap. And that includes the Pentagon, FBI and CIA.

14 posted on 09/06/2016 5:38:04 AM PDT by littleharbour
[ Post Reply | Private Reply | To 10 | View Replies]
To: Kaslin
There was no evidence of this with McDonnell; he did virtually nothing to assist Williams with getting a government contract.

The standard, here should be the Mike Espy trial.

Are you a member of the DOJ?

It’s unbelievable the way our justice system has been so corrupted.

It sure is, but then it’s no surprise under this administration.

.. prosecutors recommended on September 2 to refile the charges against McDonnell...

And Hillary walks...(with the assistance of aides)