Navigation: use the links below to view more comments.
first previous 1-20, 21-30 last
To: afraidfortherepublic
Kelly was unprepared for the interview and failed to consult prominent experts on the case...

Kelly, although a pretty face for FNC, is not a hard reporter. I'm feeling she was more concerned with the notoriety of landing such an interview than actually what came out of it.

21 posted on 07/14/2014 11:13:27 AM PDT by Zack Attack
[ Post Reply | Private Reply | To 1 | View Replies]
To: afraidfortherepublic
Ayers and Dohrn could themselves be charged in the Park Police Station case, in which Police Sergeant Brian V. McDonnell was killed. But apparently they are quite confident that this will never happen as long as President Obama and Eric Holder are running the Justice Department.

This has been covered up since the early 1970s. I recall reports that there were witnesses prepared to testify but DoJ back then claimed that the witnesses would probably testify just the opposite at the trial thus ruining any chance of ever prosecuting the Ayers for the murder.

The Ayers are part of "the Establishment" that includes the MSM and other aged 1960s Marxist-Alinsky campus radical, psycho spoiled brats and their ideological litters. Ayers' dad was an influential Democrat in Chicacorruption. 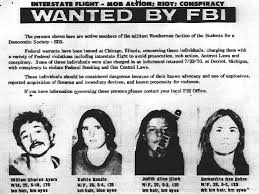 22 posted on 07/14/2014 11:17:30 AM PDT by WilliamofCarmichael (If modern America's Man on Horseback is out there, Get on the damn horse already!)
[ Post Reply | Private Reply | To 1 | View Replies]
To: Farmer Dean
The fact that Ayers is still alive proves the tolerance of decent people in this country.

The fact that Ayers is still alive proves the stupidity of decent people in this country.

This thread article explains why Bill Ayers likely went on with Megyn Kelly in anticipation of mounting a campaign to gain pardons from Barry as Barry leaves office, but the writer fails to appreciate how Kelly laid the trap for Ayers that I still hope that Arpaio is still about to spring as I explained on a prior thread article by the same writer here:

It looks to me as if Megyn is building a Roman Arch and the keystone is placing Barry at the scene of the Brinks robbery...or revelation of a key piece of evidence against Barry related to Ayers that FoxNews has obtained. I expect it is related to the Arpaio investigation.

Sure, all of the facts Megyn got Ayers to admit were previously known to wonks, but not to the FoxNews audience.

Megyn pointedly got Ayers to establish key predicates that would implicate him as being part of the Chicago-KGB- connected-Cabal that had a long range plan from the 50’s through the 90’s to get one of their own into the White House and they succeeded.

The Brinks robbery/murder in CT that Ayers and his wife were associated with is what Megyn repeatedly pushed to get Ayers to admit to and Barry has a lot of so-far unaccounted for addresses and ID and locations and associates during that period.

Megyn is up to something bigger. She is obviously going somewhere against Barry and is overtly insinuating that she is. Arpaio is up to something and left no doubt. Are they working together behind the scene??? I read Megyn’s programs this week and Arpaio’s continuing cameos on Hannity’s program this week to show that they are! 27 posted on 07/14/2014 8:54:03 PM PDT by callisto (The NSA - "We're the only part of government who actually listens to the people.")
[ Post Reply | Private Reply | To 26 | View Replies]
To: afraidfortherepublic
...in your attempt to ‘confront him’ without availing yourself of the knowledge that those of us who actually worked the case could have given you,” Noel said in a message to Kelly. The former FBI agent, who arrested the UNABOMBER and has co-authored a sensational new book about that case, was a member of the Weatherman Task Force in San Francisco, where Ayers and his wife, Bernardine Dohrn, were operating. Noel has sensational details about how the Weather Underground constructed its bombs in order to kill people, not just damage property.

FOX News need to put the name "Max Noel" on their 'must call' list when dealing with leftwing domestic terrorists...

Ayers is one of the people I pray I run into in public. Chomsky is another. Let’s just say I will take my chances with a jury.

Just watching the poor job Megan Kelly did with the subhuman Bill Ayers.