The European Union's new law giving people a "right to be forgotten," which requires Google to remove links to information about them, is having exactly the effect its critics predicted: It is censoring the internet, giving new tools that help the rich and powerful (and ordinary folk) hide negative information about them, and letting criminals make their histories disappear.

Exhibit A: Google was required to delete a link to this BBC article about Stan O'Neal, the former CEO of Merrill Lynch. O'Neal led the bank in the mid-2000s, a period when it became dangerously over-exposed to the looming mortgage crisis. When the crisis hit, Merrill's losses were so great the bank had to be sold to Bank of America. O'Neal lost his job, but he exited with a $161.5 million golden parachute.

There is nothing incorrect in the post, in fact it's a rather mild account of O'Neal's incompetence during the period. O'Neal was forced out of the company after he began discussing selling it without informing his board of directors. This is ancient, well-established history. Having it removed from Google doesn't undo the fact that it happened...

...So pedophiles can take advantage of this law as well.

Forget.me, a company that expedites Google deletion requests, tells Business Insider that it is fielding 250 requests per day. Here's a breakdown of what is being deleted from the world's greatest search engine:

A quick glance at this article and my first take is I agree with the EU’s law.

Everyone has a right to something other than the God-given rights outlined in the Constitution’s Bill of Rights.

What an upside-down world this has become.

So we should censor all of 0bama’s past, just because he says so?

So letting them control the historical context is OK with you?

Frankly, I see this more as another Glenn Beck was right moment when he told us to buy books, OLD BOOKS, so we don’t lose our histories... 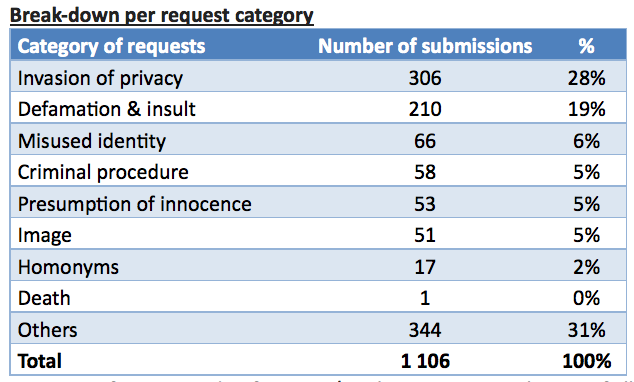 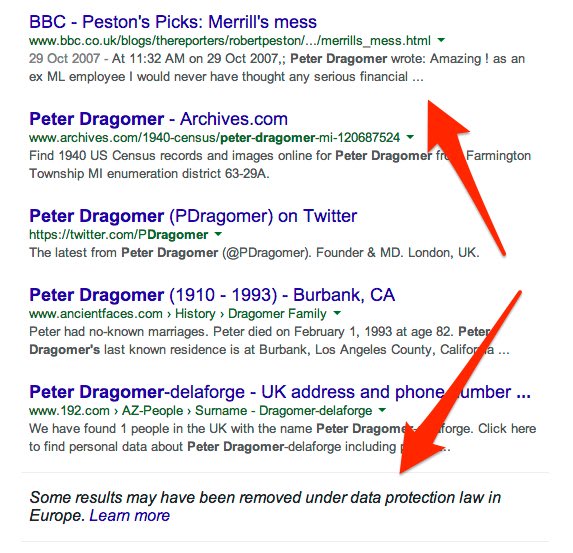 I may have missed something but I look at this as being more of an advantage for the average person.

I also strongly agree with this law.

Unless your a public figure or a criminal, you own the information about you and within reason should have the right to control that information.

What if there is was an arrest and charges have been dropped.
The arrest record is still in the google results.

How does one stop these sites from extorting 39.95 to remove the record of the arrest?

As I recall there were several “memory hole” events that took place regarding TWA 800.

“How does one stop these sites from extorting 39.95 to remove the record of the arrest?”

A well designed and enforced law is the only solution. That comes from someone who thinks at least 50% of existing laws should be repealed.

Technology is way ahead of culture and law and it might be to late to do anything about it.

Anything you have ever posted to the Internet (even for 1 second), is there forever.

If people realized how much information Companies and the Government have about us people would freak. Knowledge is power.

Would that include you birth certificate, or the record of any trial in which you have been convicted? Blanket statements are often wrong. Note that I didn’t say “every blanket statement is wrong”, because that would be an incorrect blanket statement. But, you probably get my drift.

13 posted on 07/03/2014 8:35:42 AM PDT by Pecos (Kakocracy - killing the Constitution, one step at a time.)
[ Post Reply | Private Reply | To 9 | View Replies]
To: EBH
The European Union's new law giving people a "right to be forgotten," which requires Google to remove links to information about them, is having exactly the effect its critics predicted: It is censoring the internet.

There have always been other ways to find such information if it's important enough for you to know it.

Otherwise if they are not behind bars, people have a right not to be haunted by their past mistakes for the rest of their lives.

The funny thing about big data, is like subatomic particles, when it's being observed, it changes.

So when people finally do become aware of the dangers, they'll either stop posting their opinions and activities online, or post neutral drivel, which latter would not be much fun for them, so maybe they'll stop online activities altogether and get a real life, which is what they should have been doing all along.

So letting them control the historical context is OK with you?

Whatsthematter, forgot how to go to a library and do some real research? Or is that too much trouble for you to get information that is so incredibly important to you?

Do you include Ted Kennedy’s little kerfuffle on a bridge one night?

Do you think you’d know more or less if FReeRepublic got censored because someone here wanted all their content removed?

Don’t be so obtuse in this modern day of information...how many folks do you know who actually still bother to even open a book!