With new details emerging in the Benghazi-gate controversy, the White House held a background discussion with more than a dozen news organizations. Afterward, Press Secretary Jay Carney weathered a barrage of questions from the media during an at-times awkward White House briefing -- where he tried to defend the truthfulness of his and other officials' prior claims that the initial talking points on the attack reflected the best intelligence assessment of the time.

Glad I am not the only one thinking that about Hillary. I think if the truth ever comes out about Benghazi,arming AQ terrorists in Syria, getting this country so close to a WW3 or in one before Obama is done, that anyone in this administration will be radioactive for future political endeavors.

Who were the 14 reporters briefed off the record and behind closed doors? Why isn’t this discussed more...it is obvious control of the press. And worse, by going to the meeting the press accepted the control. So we need to know who they are because anything they say/write is now just confirmed Carney talking points.

There’s nothing the least bit original or unexpected about ‘Benghazi-gate’.

But Freepers are better than that, they’ve superseded the “-gate” suffix with “-ghazi” for all future references to scandal.

Sadly, there is blood on their hands.

Woods and Dohrtey were using an LLDS to paint targets - actively. You can only do that if your LLDS is set to the code that matches the overhead or on-the-way laser guided munitions. Clearly, either munitions WERE overhead or were on their way in and codes were communicated to Woods and Dohtery. But it appears these munitions were ALSO ordered to stand down at the last second.

They literally left these men to die at the last minute.

66 posted on 05/11/2013 6:51:50 AM PDT by bluecat6 ("All non-denial denials. They doubt our ancestry, but they don't say the story isn't accurate. ")
[ Post Reply | Private Reply | To 58 | View Replies]
To: ThePatriotsFlag
So we need to know who they are because anything they say/write is now just confirmed Carney talking points.

Too true. But no matter how many writers a liar tries to influence, he/they will still get caught. And the more writers, the bigger and widespread the lie.

“I wasn’t involved in the talking points process.... As I understand it, as I’ve been told, it was a typical interagency process where staff, including from the State Department, all participated, to try to come up with whatever was going to be made publicly available, and it was an intelligence product.” “With all due respect,the fact is we had four dead Americans. Was it because of a protest or was it because of guys out for a walk one night who decided to go kill some Americans? What difference at this point does it make?”—Hillary Clinton 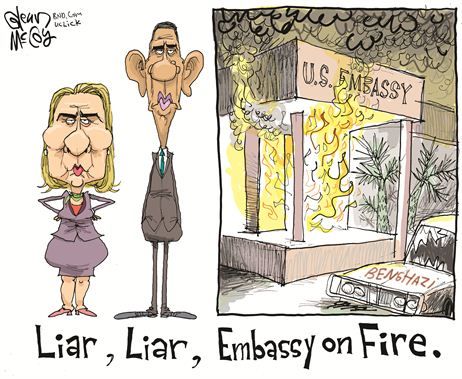 "With new details emerging in the Benghazi-gate controversy, the White House held a background discussion with more than a dozen news organizations. Shown below is Herr Obozo pleading with his out house mediots to save his butt!" 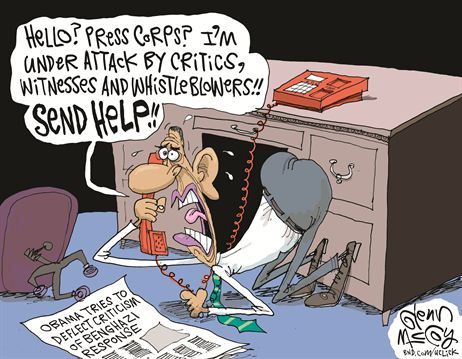 What difference does it make if she did(n't) say it, anyway?!! >>Nothing can happen on this no matter what truth is uncovered. The American people aren’t seeking truth and haven’t for many years now<<

No war has EVER been won with that kind of defeatist attitude. Defeatism is not an admirable trait IMHO.

I read this (below) but still a little confused on what you are saying that ON said about CIA and the MANPADS.I only saw the missiles referenced at the beginning of the article. I’m trying to understand that better as I thinking getting to the REASONS behind the whole Benghazi coverup is the key to toppling the whole structure. (I don’t believe it was only to do with reelection.)

Clip and save this column. Herein are some important events, names, places – facts your children and grandchildren will need to know about these perilous times:........

Pictures speak a thousand words. I’d look dumbfounded too if I had to lie to the American people everyday.

Pffft... Don't you get it, these assholes are above the law.

The only punishment for these people is tar, feathers and rope. No court, no arrest, no judge, just vigilante justice.

That will be great as probably the final pictorial reality of Frau Clintoon re Benghazi.

His ears are as red as Obama’s Presidency.

I want the answer to that as well. After the Carney carnage the story about the reporters that were briefed ahead of time seemed to disappear.

This IRS story seems like a gift from the Obamba regime to conservatives. Something stinks about the timing of this story, which the WH is blaming on a Bush appointee.