A Virginia lawmaker who drew gasps from his colleagues when he brandished a borrowed AK-47 during an anti-gun speech Thursday was found guilty in 2002 of committing a vicious 1999 assault, was sanctioned for legal misconduct while prosecuting a rape case, spent six months in jail for contempt of a federal court, and saw his law license revoked in 2003.

Democratic Delegate Joseph Morrissey brought the rifle to the floor of the House of Delegates to demonstrate how easy it is to carry firearms in Virginia. Republican Delegate Todd Gilbert interrupted Morrissey’s speech to ask him to remove his finger from inside the gun’s trigger-guard — a basic gun-safety practice.

“I don’t think you should be able to possess an assault rifle,” Morrissey told ABC News on Friday.

But while Morrissey introduced a gun-control bill Thursday aimed at reducing criminal violence in Virginia, he has a history that involves physical violence of another kind.

According to legal brief filed by the victim’s attorneys, Morrissey shouted, “I’m going to kill you. I’m going to beat your head in,” before beating the victim and “smash[ing] his head into the corner of a brick wall.”

The 2003 revocation of Morrissey’s law license followed that courtroom reckoning, but by then his disciplinary record in the legal profession was already a lengthy one.

After he applied for the reinstatement of his law license, the Virginia State Bar listed a litany of Morrissey’s misdeeds when it published his petition.

That list included the December 1993 suspension of Morrissey’s law license for six months following a complaint from a rape victim in a case he prosecuted. Morrissey, she said, allowed her rapist to plea-bargain his case down to a misdemeanor after his father paid $50,000 — half to the victim and the other half to charities Morrissey chose. She also testified that Morrissey hid the details of the plea-bargain from her.

The bar had already sanctioned Morrissey in June of that year when it learned of his misconduct in a felony drunk-driving case. Without asking the court’s permission, Morrissey issued a new arrest warrant with a reduced charge of misdemeanor reckless driving. He was required to write a formal letter of apology to the judge.

By that time, the bar was accustomed to hearing about Morrissey.

It forced him to attend legal ethics training after he represented a criminal defendant in the same case in which he had previously prosecuted him. Another reprimand came for engaging in a fist fight with a defense attorney whose client he was prosecuting.

In 1999, the bar suspended Morrissey’s law license again, this time for three years, after he made “public statements about the identity, testimony or credibility of prospective witnesses” in a federal court case.

Morrissey was convicted on two counts of contempt of court in that case, and sentenced to 90 days in jail plus three years of probation. The U.S. District Court for the Eastern District of Virginia also disbarred him, effectively denying him future access to plead cases in federal court.

In a separate case that contributed to that suspension of his law license, Morrissey was cited for contempt in Chesterfield County, Va. after he directed an angry outburst at a judge during a sentencing hearing.

After he was released from jail, Morrissey violated the terms of his probation by “attempting to circumvent the conditions of probation and lying to [his] probation officer,” according to the Virginia State Bar. As a result, he spent an additional 90 days in jail and his law license was formally revoked.

The bar issued a recommendation to the Supreme Court of Virginia in May 2011, arguing that Morrissey’s petition for reinstatement should be denied. The court disagreed, ruling in December 2011 that he could have his law license back after ten years of disbarment.

The Richmond Times-Dispatch reported in 2010 that one witness in his license reinstatement hearing was longtime gay-rights activist Guy Kinman, who said he missed Morrissey’s headline-grabbing antics.

“When I pick up the Times-Dispatch, generally his name is not there” anymore, Kinman explained.

“Some of the drama is gone. Where are you Joe? Any drama freaks among us would wish the old Joe were here.”

Look at his thumb.
Imbecile.

Why did this assclown not have 10 guns pointed at him during this stunt?

Another liberal doing something stupid with a gun. I see a pattern developing here...

Liberalism is a mental disease.

7 posted on 01/20/2013 5:20:39 AM PST by ConservativeInPA (Molon Labe)
[ Post Reply | Private Reply | To 1 | View Replies]
To: servo1969
Republican Delegate Todd Gilbert interrupted Morrissey’s speech to ask him to remove his finger from inside the gun’s trigger-guard — a basic gun-safety practice.

It's a common theme: politicians and media types telling US what guns we should not have, and all the while violating basic gun safety practice, because they know next to NOTHING about guns to start with.

Me, I've just about had it with this whole charade. These people mean to take our civil rights by any means necessary, starting with the right to keep and bear arms. There will be war. i must admit... i'm not surprised no one called him out on this. 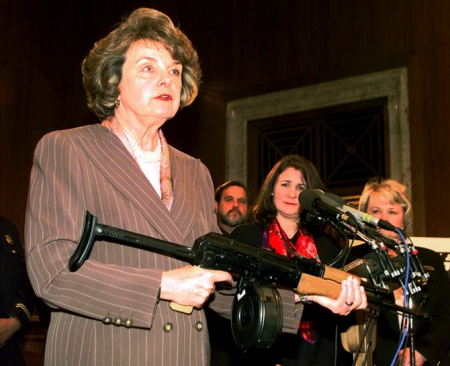 If he’s a convicted felon, and I’m not sure that he is from reading the article, wouldn’t he be violating the law by possessing a firearm?

Normally his thumb is occupied somewhere else.......Uh, holding a pen to sign legislation?

The guy who lent him the firearm also committed a felony by letting him have the firearm.

I think we all agree on that point - I don't think YOU should be allowed to possess ANY weapon, Mr. Morrissey. Dangerous fool.

Can you imagine the hand wringing of what the liberals would do or say had this moron’s finger slipped causing several rounds to shoot and possibly ricochet hitting or killing someone in that room? Would libs STILL be on a rabid anti-gun stance even when it was one of their own that caused the problem with not knowing how to properly handle a loaded weapon? Would the same libs want to prosecute this dopey liberal to the full extent of the law and possible the death penalty if the bullets discharged killed one or more people?

He is not a convicted felon. He is a disbarred lawyer who got his license back on a 4-3 vote of the state supreme court.

Just looking at that nimrod pinned my gaydar.

18 posted on 01/20/2013 6:23:05 AM PST by Arm_Bears (Ted Kennedy's Oldsmobile has killed more people than my guns.)
[ Post Reply | Private Reply | To 3 | View Replies]
To: nonliberal
This is the Virginia legislature. Folks walk about the state wearing pistols ~ just like it was normal eh, and there's also a concealed carry situation where law abiding folks, and even state legislators, can carry concealed weapons.

There are 100 members of the House ~ I'd guess there were 99 firearms ready to bring to bear on any problem.

If it's diffferent in other states that's their problem.