After reviewing an independent report by former FBI Director William Webster, McCaul revealed the department knew about disturbing emails between Hasan and a known terrorist, but was reluctant to act. Hasan's 2009 shooting spree left 13 people dead.

McCaul claimed the report shows the FBI was hesitant to investigate an American Muslim in the military.

The report said the emails between Hasan and al-Awlaki should have been forwarded by the FBI to Defense Department leaders that Hasan worked for.

The FBI, however, said it saw no evidence of terrorist activities in his case, and Hasan's computer activity was not enough to take action. 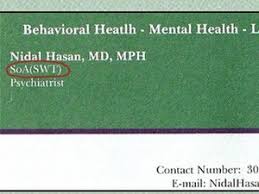 Most of America know he was. Only DEMS and RINOs did not know.

I find it absolutely reprehensible that Hasan was ever allowed to become an officer in the US Army. There is no way he could have passed the background check, save for PC ruling the day. There are people who knew he was a ticking time bomb and failed to act. The FBI is just one among many with this label.

Hasan should have been tried, convicted and executed a long time ago.

I wonder how many open and active NAZI party members were serving in the US Army during WWII?

8 posted on 07/23/2012 1:02:52 PM PDT by SJSAMPLE
[ Post Reply | Private Reply | To 1 | View Replies]
To: T-Bird45
Not only was Maj. Hassan pretty straight forward in stating his political/religious views to many in the US Army which were ignored for reasons of careerist cowardice and craven groveling before the doctrine ‘diversity is our strength’ but we now find that the FBI had detected him in communication with a known terrorist but declined to press the matter do to ‘First Amendment Issues’. The individual was a field grade officer in the US Army not a cab drive in Passaic. Yet the info was never passed to Army CID or DIS or whoever since the major never asked directly for help in planning a bombing or massacre. The agencies of the US Government charged directly with protecting the nation and its citizens betray their trust out of some perverted notice of ‘tolerance’. No wonder Americans have no faith in their government or its institutions. Just in passing some members of the US Army have faced investigations and disciplinary proceeding for simply having a Confederate flag displayed in their residence. Yet this obvious security risk is let move on year after year in the Army.
9 posted on 07/23/2012 1:04:26 PM PDT by robowombat
[ Post Reply | Private Reply | To 4 | View Replies]
To: robowombat
All weekend the MSM and hack politicians have been busy implying, if only people familiar with James Holmes had noted and reported his actions and demeanor to some unnamed authority a tragedy, could have been prevented.

In the mean time the FBI had the goods on the Fort Hood shooter and did NOTHING.

The FBI "PURGED" training documents because some of the materials that were being used relied on inaccurate information or stereotypes linking Muslims to terrorism.

Meanwhile Mueller refused to reveal the names of 3 Muslims he personally recruited to review said material or what standards were applied when doing so.

Last February, Mueller met with the president of the Islamic Society of North America (ISNA), which was tied to the terror groups Hamas and the Muslim Brotherhood in federal court documents, specifically to discuss progress on the training issue.

So now in addition to having Members/Supporters of the Muslim Brotherhood having been given highly-placed positions (with access to sensitive classified info) in the DHS, FBI, DOJ, DOD, etc., these organizations have taken it upon themselves of not only REFUSING to identify who it is we are at "War" with and the "Root Cause" of those who want to destroy us, but have gone so far as to purge all training material, less someone get the "wrong idea" that 99% of ALL Terrorist Acts committed worldwide are committed by Radical Islamists in the name of Moo-Ham-Ed, Islam/Sharia and that while there are many "Moderate" Muslims, there is NO "Moderate" Islam.

We are sooooooo screwed!!!

Of course they knew it...

So did his coworkers. But it wasn’t PC to go up the chain of command and get this asshat jailed or discharged.

13 posted on 07/23/2012 3:50:36 PM PDT by hattend (Firearms and ammunition...the only growing industries under the Obama regime.)
[ Post Reply | Private Reply | To 1 | View Replies]
To: robowombat
Texas Rep. Michael McCaul claimed political correctness stopped the FBI from launching what may've been a lifesaving investigation into Army Maj. Nidal Hasan, almost a year before his deadly shooting rampage at Fort Hood.

This was just WORKPLACE VIOLENCE get over it. there is noting to see here. Just a hardworking citizen who lost it for the day. Heck it could have been the Base Rabbi going postal.

Penn St. gets fined $60 million for ignoring a pervert.

The FBI gets a pass, nobody even gets fired when it ignores a nutburger barbarian muzzie who ends up KILLING dozens.

Not only was he an officer in the army, he was in the pschology field. I’ll bet if they probe just a little they’ll find every muslim solder he ever treated is a bomb waiting to go off. They went to him and he gave them instructions. Of course, it would be politically incorrect to investigate them.