If you think the current anti-war movement camouflages an anti-American sentiment, you’re only partly right. Rent or buy FTA, the 1972 Vietnam War protest documentary just released on DVD after a 37-year absence. It’s the best example of an anti-war brigade which set out to blast America right along with its hawkish foreign policy. And it’s headlined by — big surprise –Jane Fonda. FTA captures Fonda, Donald Sutherland, and lesser known artists traveling throughout U.S. military bases, both here and abroad, to protest the war — and just about every facet of American life.

And yes, the letter “F” in the title does stand for what you think it does, even though the tour regulars merrily shout out “Foxtrot … Tango … Alpha …” in some of their song and dance skits.

The film makes for a fine historical document, even if its entertainment value is hopelessly dated. Clearly, releasing the film anew wasn’t mean to reintroduce cobwebbed protest songs to popular culture, and the political skits require plenty of background reading to fully appreciate them...

3 posted on 03/08/2009 1:56:53 PM PDT by SpaceBar
[ Post Reply | Private Reply | To 1 | View Replies]
To: AJKauf
November 22, 1970 -- During a fund-raising tour for GI deserters, Vietnam Veterans Against the War and the Black Panthers, Jane Fonda is quoted in the Detroit Free Press as telling a University of Michigan audience: 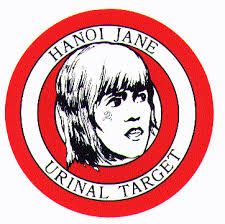 tomorrow night is her OPENING performance, the rushes were all the ones before, but the offficial opening is March 9

I have hit that target in many a VFW

Having good aim is important.

dont laugh I watched the china syndrome twice in eight grade ENGLISH class since at the time the seabrook nuke plant in nh was about to go online. Of course at the time i didnt realize i was an attempt at indoctrination I was just happy that it was movie day

Can’t make it tomorrow night but give me a heads-up on the protest for the second performance, if there is one.

This was just on one of the movie channels last week or the week before. I changed the channel after watching it for ten minutes because it was stupid and unfunny. You would have to be an acid dropping hippie freak to sit through this piece of garbage.

16 posted on 03/08/2009 3:08:17 PM PDT by Bender2 ("I've got a twisted sense of humor, and everything amuses me." RAH Beyond this Horizon)
[ Post Reply | Private Reply | To 1 | View Replies]
To: AJKauf
Jane Fonda is still a commie. She is one of many "celebrities" and demonRat leaders (House Judiciary chair/Bush-Cheney-Rove 'investigator' John Conyers inc) who have given their endorsements to the Revolutionary Communist Party's "World Can't Wait" movement...(the org will probably soon be dropping the "Drive Out the Bush Regime" portion of their title, perhaps replacing it with "Drive Out the Capitalists!")

The gulf of Tonkin resolution was the Vietnam declaration of war, and was passed by the Democrats.

The voting of war credits for Iraq was the Iraq declaration of war, and was passed with broad bipartisan support. That sneaky Bush, arranged for the vote to take place just before the election and slimey members of the legislature were unwilling to vote against it so close to an election.

We have nice parting gifts.