Is Lindsey Graham Trying to Protect Himself or Others from Corrupt Acts in the Ukraine?
Gateway Pundit ^ | Dec 19, 2019 | Joe Hoft

Senator Lindsey Graham told Sean Hannity he will call in corrupt liar Adam Schiff to testify before the US Senate on his sham impeachment proceedings. Lindsey Graham is a big talker but he has no desire to discover the truth.

Lindsey Graham again on Wednesday defied President Trump and vowed to protect the Democrats and their deep state operatives.

Via The Washington Examiner and Conservative Treehouse.

TOPICS:
KEYWORDS: bloggers; fakenews; joehoft; johnmccain; lindseygraham; trump; ukraine Navigation: use the links below to view more comments.
first 1-20, 21-25 next last
Lindsey is either involved in Ukraine corruption or he's doing it to protect McCain's name.....or both. Lately Graham has been talking out both sides of his mouth like Mitt Romney. Somethings got to give!
1 posted on 12/19/2019 10:10:58 AM PST by White MAGA Man
[ Post Reply | Private Reply | View Replies]
To: White MAGA Man

“Lindsey Graham Trying to Protect Himself or Others?”

Or at least that’s my suspicion.

Does this author have a complete thought?

Is it limited to Ukraine?

You can bet that there are a hoard of republicans or their family members getting fabulously wealthy beyond our wildest dreams.

Linseed is actually a little man, much like those he seemed to cling to early on , like McCain and BoB Barr.

8 posted on 12/19/2019 10:20:18 AM PST by NormsRevenge (Semper Fi - Monthly Donors Rock!!!)
[ Post Reply | Private Reply | To 1 | View Replies]
To: White MAGA Man
I must say that a politician visiting Ukraine, even when they are rubbing shoulders with the corrupt McCain, Yovanovich and Porschenko, doesn't mean that they are participating in the corruption scheme.

Has Rudy even hinted that he's found evidence against Graham?

That said, I still don't trust Graham, and he does appear to be acting weaselly.

No. It’s hoft. That means it’s not real news, but opinion packaged as news. Gateway pundit is so discredited it’s ought to be banned from FR. Pure unadulterated garbage, usually plagiarized from someone else.

The graham speculation is irrelevant. The issue is the gateway pundit.

Whatever occurred in the Ukraine should be investigated thoroughly to prosecute criminal acts and prevent it from happening again.

If Graham or any other republicrat was involved in this then so be it. Period. I don’t think any of us doubt that many republicrats had their hand in the cookie jar, but I have not heard any allegations against Graham. Based on this, that means it is likely that there is no corruption by him given his position of responsibility in all of this and the thorough knowledge of Soros of the road map of corruption there.

The impeachment is part and parcel of the pro-active defense against the Ukrainian corruption involving Biden and many others. We can therefore safely assume that if Graham was involved it would have come out as that seems to be their playbook.

if he puts these ridiculous and totally inadequate impeachment charges to rest, I don’t care much if he’s covering up being Jack the Ripper!

go McConnell! please save USA from any more of this garbage farce! 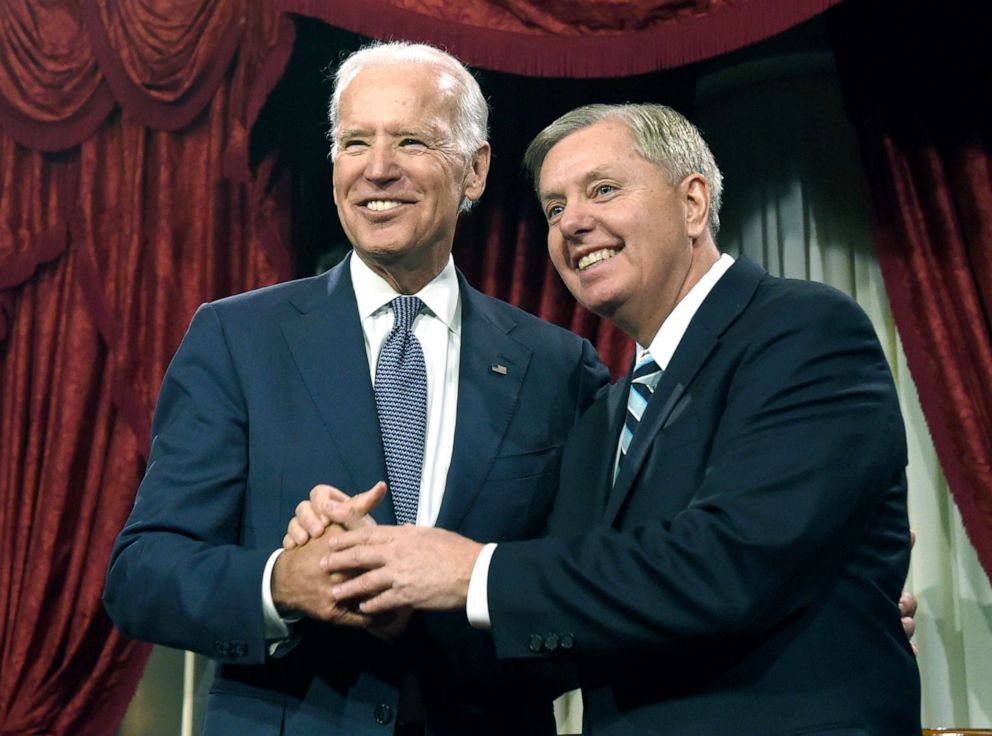 And the fact it is being posted by a newbie adds to the suspicions.

But hey. Lets all knee jerk on our hatred for “Linda” Graham.

That’s what we FReepers do best.

None of the above.

Both Graham and Biden were big supporters of Petro Poroshenko who was considered a “reformer” over his corrupt predecessor. Over time it became clear that Poroshenko was actually more corrupt and deeply compromised by the oligarch money in his country. Burisma was robbing the country blind and laundering the money for protection to the Bidens. This was part of why Poroshenko forced Shokin to resign based on Biden’s bribe. No similar evidence has been uncovered regarding Graham who may have simply been naive but not a participant like the Bidens.

With Poroshenko replaced by a (hopefully) honest Zelensky the truth may eventually make it to the Senate or the DOJ but if Graham discredits Giuliani in the hearings this may put an end to it.

The big crooks were the Soros and Clinton shell organizations that took a “cut” from the billions of US taxpayer aid to Ukraine that was allocated to “charitable” NGOs. The US Embassy in Ukraine was sarcastically known as “Clinton Campaign Headquarters” by the Ukrainian officials.

He is neck deep in this. That’s why he has not had 1 hearing before his committee in over 2 years.

Linda is dirty and needs to be exposed. (YIKES)

I am among the millions of conservatives that would love to see the Senate take out its revenge on the dems. However, holding a long drawn out trial is not the way. Having witnesses is a very dangerous game. Bad things can happen. During the Nixon impeachment investigation, a mid level White House staffer was asked how he could remember so much. His answer will live in infamy, “..because we record everything that is said in the White House.” That lead the the “tapes” being released sealing Nixon’s fate. Be careful what you wish for. End the impeachment as fast as possible than open Senate investigations on ________________(fill in the blank)

Yes, but hasn't he been busy day and night trying to get to the bottom of the Mueller report??

He promised us that!

"Once the Mueller report is put to bed, and it will be soon, this committee is going to look long and hard at how all of this started," Graham said. "We’re going to look at the FISA warrant process. Did Russia provide Christopher Steele the information about Trump, that turned out to be garbage, that was used to get a warrant on an American citizen and if so, how did the system fail?

Was there a real effort between Papadopoulos and anybody in Russia to use the Clinton e-mails stolen by the Russians, or is that thought planted in his mind? I don’t know, but we’re going to look."

Graham also read some of the much-discussed anti-Trump text messages from fired FBI counterintelli mp, that turned out to be garbage, that was used to get a warrant on an American citizen and if so, how did the system fail? Was there a real effort between Papadopoulos and anybody in Russia to use the Clinton e-mails stolen by the Russians, or is that thought planted in his mind? I don’t know, but we’re going to look."

This is why, and by whose doing, the full impeachment of President Trump will come about. Because we have a skunk and a coward and a traitor and a pillow-biter leading our cause.