Handmaids are everywhere these days.

The red robes and white bonnets made famous in Margaret Atwood’s dystopian novel-turned-streaming-sensation first showed up in Texas. Then they spread — throughout the country, over the ocean and eventually into a Senate office building where the women wearing them loomed over lawmakers scheduled to decide whether Brett M. Kavanaugh deserved a spot on the Supreme Court.

Now Kavanaugh has his seat, and abortion rights activists have their uniform. News outlets covering the crusade by lawmakers in conservative states to stop women from ending their pregnancies seem to have settled on a favorite featured photo in turn. So when the public thinks about Roe v. Wade, it thinks about “The Handmaid’s Tale.” And when we think about the activists fighting for women to control their own wombs, we think about them wearing red and white.

“Fight to keep fiction from becoming reality,” exhorts the Handmaid Coalition, which helps organize events and even offers instructions for garb assembly. Fiction is the imaginary country of Gilead, the theocratic realm Atwood sent to the bestsellers’ list in 1985. Reality is America, right now.

The comparison has some power. The title character of Atwood’s creation, remade for millennials on Hulu two years ago, is treated as a human incubator. The laws that states are adopting this spring banning abortions at the first detection of a “heartbeat,” or prohibiting them outright as Alabama did this week, also yank any semblance of bodily autonomy away from women.

The spectacle, too, has been effective. Those women standing silent outside the Kavanaugh hearings, all in carmine, looked like a work of art, and like art, they had a visceral impact. They didn’t make people think so much as they made them feel — our throats tightened, our stomachs clenched.

Oh but dressing up like a TV character is sooo much fun. Little minds are easily entertained.

Yep, time to switch to burqas.

“Handmaids in Atwood’s universe, for example, are only allowed to have sex when they’re being forced to by their masters, whose children they’re then supposed to carry. Here, in real America, women can have sex with more or less whomever they want — or not — and the restrictions cover only what happens next, which is exactly what Republicans eager for harsher rules seize on to argue that it’s ridiculous to suggest women can’t “choose.”

Maybe the point of the protests is that limiting reproductive freedom necessarily ends up limiting sexual freedom by pushing women toward abstinence, so the right to choose in one area isn’t worth much without the right to choose in the other. (Incidentally, that’s what made actress Alyssa Milano’s proposed “sex strike” so absurdly counterproductive.) But a cape and a bonnet will have trouble making that case without some help.”

THIS AUTHOR GETS IT!!

I thought they were displays for ketchup.

You know.....like the guy on the street corner wearing the chicken suit to advertise for a restaurant.

Those costumes made people feel alright...

...it made them feel that the pro-abortion side is a bunch of drama-queen nitwits that would rather sew together and wear a ridiculous outfit...

...than actually look at the horrible truth of abortion. 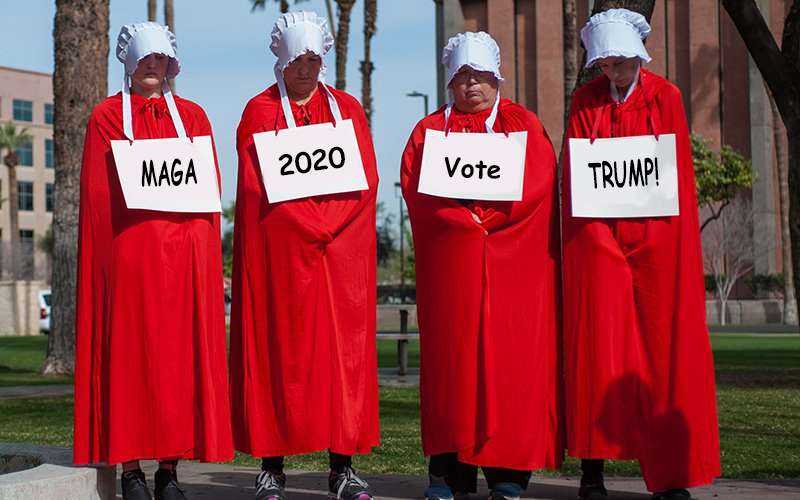 “Handmaid’s Tale” is faker than plain fiction - it’s idiotic nonsense. When I see some activist wearing the costume to me they are saying “I’m here to represent the idiotic nonsensical view.”

10 posted on 05/17/2019 1:22:50 PM PDT by \/\/ayne (I regret that I have but one subscription cancellation notice to give to my local newspaper.)
[ Post Reply | Private Reply | To 1 | View Replies]
To: Morgana
Margaret Atwood’s dystopian novel-turned-streaming-sensation

LOL They fret over this yet turn their backs to womens horrible real-world treatment under Islam.

Such as--
For adultery: Literally buried in holes up to their arms (with their arms down so they're buried too) and hit with big rocks by bearded, angry men until they're dead.

Forced to cover their bodies and faces with robes and veils or at least their hair with scarves. Whether they want to or not.

Can be beaten, even to death, by their husbands, for whatever reason he decides.

And these are the GOOD Muslim countries!

In Taliban Afghanistan, or Saudi Arabia, even killed for working or driving a car.

Do you think Islamic women in Islamic countries can legally get an abortion? LOL!

And they get their news from late night chat show comics.

That’d be a great Burning Man alternative — light up a Handmaid!

Funny how the liberals overlook the fact that the original novel was about an Islamic leadership.

Here’s a fun list along that line for a Friday afternoon:

When returning home from the grocery store, you’ve always bought a loaf of french bread;

After taking a cab, just reach into your pocket for the exact cash needed for the fare.

They don’t have to worry about
me hittin’ them. Maybe Laz. Even
then, menopause is long back in
their rear view mirrors.

Yes the sight of the handmaids made us feel.

It made me feel that those girls are playing dress up,and don’t have a grasp of reality. Among other things.