To say this is a strongly worded letter is a bit of an understatement.

As you’ve no doubt heard, Illinois State Attorney Kim Foxx is in the middle of a firestorm for her apparent corrupt handling of the Jussie Smollett case. After inexplicably dropping all charges, she’s told several different stories, including some that are objectively false. She’s under FBI review, under fire from the Chicago PD, and she’s now taking hits from the Illinois Prosecutors Bar Association.

Excerpts from the letter are as follows.

The Illinois Prosecutors Bar Association serves as the voice for nearly 1,000 front line prosecutors across the State who work tirelessly towards the pursuit of justice. The events of the past few days regarding the Cook County State’s Attorney’s handling of the Jussie Smollett case is not condoned by the IPBA, nor is it representative of the honest ethical work prosecutors provide to the citizens of the State of Illinois on a daily basis.

The manner in which this case was dismissed was abnormal and unfamiliar to those who practice law in criminal courthouses across the State. Prosecutors, defense attorneys, and judges alike do not recognize the arrangement Mr. Smollett received. Even more problematic, the State’s Attorney and her representatives have fundamentally misled the public on the law and circumstances surrounding the dismissal.

The public has the right to know the truth, and we set out to do that here.

I wish they could develop the same outrage for unethical conduct on something far more important such as national security........ /s

Yeah, if she had only used a non-secure email system for classified email, then wiped 30,000+ emails off of it to hide the crime - even after having been ordered to preserve evidence... Well, then she might have gotten away with it. But when you go against the liberal agenda, or fail to hold up your end...well, she’s toast.

I wish I could believe SOMEONE will be held accountable for the travesty foisted upon this battered country. We have been slammed around enough!

America has had it with lying lawyers and
their network of corruption, each protecting
felony upon felony.

“The Illinois Prosecutors Bar Association serves as the voice for nearly 1,000 front line prosecutors across the State who work tirelessly towards the pursuit of justice. “

I know he’s got a lot on his plate but maybe Barr could take an interest in this skag? He’s got DOJ attorneys all over the place looking for work.

Lawyers lie as easily as they breathe.

Maybe she is just infatuated with him.

Illinois Prosecutors Bar realizes the illegality of what Foxx did is so blatant and so public now they could not turn a blind eye and remain relevant & credible.

And what about the judge in the deal? He could have stopped it, too. And should have.

How many will fall on Obama’s sword for bunch of bull sht privilege narrative biscuits is beyond me. They are all in on the fraud, but he is the one getting them killed for himself only to benefit

Meaningless, the Bar has no authority to do anything. Mooches pal gets away with this bank it.

And what about the judge in the deal? He could have stopped it, too. And should have.

90% of the postings so far hasn’t even mentioned Watkins the Judge in this case .This post at least mentions his name and a pictures but nothing about his record
http://www.freerepublic.com/focus/f-chat/3737585/posts 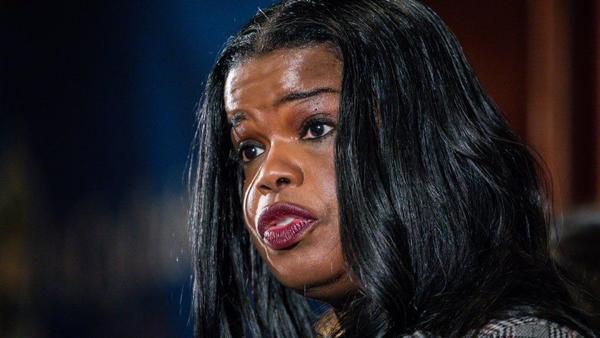 "I skipped law class the day they taught penalizing multiple felonies. I was getting my nails done."

Chicago columnists blasted Kim Foxx's decision to drop the 16 felony counts against hoaxer Smollett. Chicago police union called for a federal investigation into Kim Foxx’s handling of the case.....her sub rosa actions on the Smollett family’s behalf after she was contacted by Tina Tchen, Michelle Obama's onetime aide. “Amateur hour is over.” ....this is nothing new for Kim Foxx. We’ve been complaining about her for two years on so many levels. Her office is just completely out of control.”

I gotta wonder if the Obama Crime Family is grooming Smollett for political office down the road. The way this was dropped then his record expunged tells me they have something planned that requires he have a clean record with no felony convictions. Could be they wanted another good looking, clean, articulate, black man to run for senator of Illinois and repeat the farce that is Barry Soetoro.

I think it’s imperative Smollett get that felony on his record in a way that cannot be expunged later on. It’s the only way to make this right. If the law was broken in the deal then the deal is invalid and he goes to trial as planned or makes a plea deal to accept the felony, do his 5-15 years in prison he owes, then get on with his life.

After 24 years of Clinton/Bush/Obama just exactly how many honest, competent and dedicated DOJ attorneys do you think there are?

There is nothing “inexplicable” about this. It was pure Chicago-Dem pay-to-play. She’s been offered some form of reward for her service to Team Obama. I suspect a guaranteed nomination to a State Senator or US Congress seat, in a guaranteed D district.

Tina Tchen will skate. Michelle is not even discussible.