Not paranoid enough, with these F sticks.

The MSM also did so with Nixon at his funeral.

662 posted on 12/05/2018 11:52:29 AM PST by Yulee
[ Post Reply | Private Reply | To 610 | View Replies]
To: ExTexasRedhead; All
What many still can't accept is that there's a team of military intelligence experts who have been executing a masterful, superb takedown of the Obama/Clinton crew, since Trump was inaugurated.

They operate from the shadows, in silence. And use deception and surprise, to carry out their objectives.

These are not pretend spooks, like the lamentable amateur Pete Strzok, who disclosed the entire Crossfire Hurricane crime by text.

These men and women likely hark from secret intelligence arms of the US military intelligence community, such as the DIA & Defense Clandestine Service.

Most will have honed their tradecraft in actual combat theaters such as Iraq, Afghanistan and Syria, learning from visionaries such as General Mike Flynn at JSOC. Others will have faced Chinese and Russian adversaries, over many years.

Their expertise extends from deception operations as described above, to counter-intelligence, psyops and misinformation. And much more, we have no knowledge of.

Think of them as a hidden Trump praetorian guard, total patriots who are determined to restore America as a functioning constitutional Republic, if not the shining light on the hill it aspires to be.

Their work has been devastatingly effective, against Obama's goons and the Clinton crime cartel." 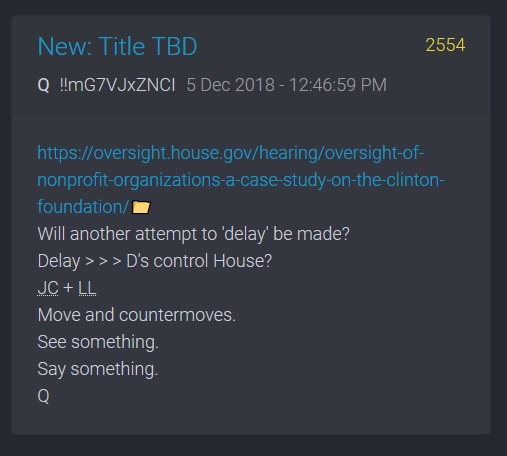 I hope so. It would be a relief to know that POTUS will not be flying on that plane.

Absolutely and without a doubt. And it will have to be something serious.

It just hit me. Why the Senate was so key. The Senate was the key to completely reforming the judicial branch. There’s going to be a big gusher of judges approved, plus plenty more vacancies to come and supreme court nominees. Without control of the legal system it should be difficult for them to maintain their institutional gerrymandering and election cheating. Check mate. A lot of prosecution also is enabled by having reliable judges in the system. And it’s impeachment protection.

You’re seeing change today with mulller requesting no jail time for Gen’l Flynn, on his birthday. That’s a blink. That was almost certainly ordered by General Whitaker.

The stockpile they are wasting is getting much smallllller

Heads up for mass casualty event.

Death of GHWB saved lives. May God bless his soul.

“GH was obviously the “capo di tutti capi” of the DS.”

What? The man was 94 years old when he died - he wasn’t capo di anything for at least 20 years. Old fart was too busy surviving skydiving incidents.

2554
Q!!mG7VJxZNCI5 Dec 2018 - 11:46:59 AM
https://oversight.house.gov/hearing/oversight-of-nonprofit-organizations-a-case-study-on-the-clinton-foundation/📁
Will another attempt to 'delay' be made?
Delay > > > D's control House?
JC + LL
Move and countermoves.
See something.
Say something.
Q

“These people ARE that evil. You are giving them credit they do not deserve.”

I do not underestimate the evil of the deep state. My main point was that the delay does not serve any purpose. A delay of a week does not impact any outcome.

Relative to the context of my quote, as far as Bush goes, my comment “Think about what you have to believe to go there.” (go there meaning Bush’s complicity). I’ll give you a head start. Was 43’s eulogy today where he spoke about his last words with his father on Friday a lie? What was 43’s gain to have a delay in D5 by a week? I stand by my last sentence of my quote that you showed in your post.

All for a LARP

And speaking of coincidences....

One show I watch is NCIS. Over the last few months I’ve notice them using the following phrases:

BOOM
Fast and Furious
There are no coincidences.

Also the phrase “dark to light” or something close to that (darkness?) was used but maybe not NCIS but on NCIS: LA.

A bunch more I think, but those are the ones I noticed and that I recall right now. What are the odds of that? I also remember a very very very strange episode (late last season?) that ended in some guy being tied up and tortured under very freaky (satanic?) circumstances and it was never resolved. Normally the next episode would resolve it. Or at least a couple of episodes later. It was very “out of character” in tone and in the fact that it wasn’t mentioned again - unless I missed it.

Something is definitely going on there. Either messages being sent or Q being mocked or something.