"A Valentine" (1786), a poem by Henry Livingston, Jr., the author of "Night Before Christmas." Music from an 1806 score of "Birks of Envermay" from "The Duena," a song appearing in Henry Livingston's Music Manuscript. Illustrated by vintage postcards.

Henry's family only found out that Moore was claiming the poem long after Henry was dead. Being involved with the church with which Moore was a power, the family was hesitant to get into a public fight. They finally went public 40 years after discovering Moore's claim. From then on, it was a matter of competing scholars taking both sides. Then the matter would be forgotten for another twenty years and the scholars would pop up again.

No original manuscript with corrections ever existed for Moore. He claimed that he had written the poem in his head and wrote it down perfectly, needing only a few edits in final publication. Unfortunately for history, the letter Moore wrote asking the editor whether he had known when he published the poem who had written it still exists. On the back of the copy of the poem the editor had sent Moore. This is the poem Moore claimed as his own with a few edits. This is the poem that had massive editing by the editor, from the original version from a decade before, that Moore didn't know about.

Henry's family HAD an original, hand-corrected manuscript that was found after Henry's death. It passed down through two descendants before it ended up burning in the housefire of a 3rd.

The latest academic go-rounds started in 2000 when I brought the problem to Don Foster. His technique was literary analysis, which is prone to dispute.

Some years later, an emeritus professor who had corrected some of Foster's work decided to settle the issue with statistical analysis and asked for my help. We spent 3 years identifying every aspect of poetry that could lead to numbers that were analyzable. The most innovative was to recognize that there seemed to be a difference in the way the tongue in the mouth moved while reciting Moore and Henry aloud. Phonemes is a study of sound pairs between the end of one word and the start of the next. This is what Mac Jackson studied. He identified the favorite phoneme pairs of Henry and Moore, then looked at the favorite phoneme pairs of the author of Night Before Christmas. They matched those of Henry and were OUTSIDE the range of Moore's. This fitted in with all the other statistical analysis. Every calculation of every aspect of the poetry that could produce numbers showed that the poem was outside Moore's style and completely inside Henry's.

Don's work received far more publicity in 2000 because Don worked on big public cases. Poetry collections changed the attribution of the poem based on Don's work. Publishers didn't. While authors called and wrote me saying that they believed, they were unable to get their publishers to change the attribution for fear people would search on Moore's name and new editions would lose sales. There was a great deal of frustration expressed.

View Image on the images below for large, readable copies. 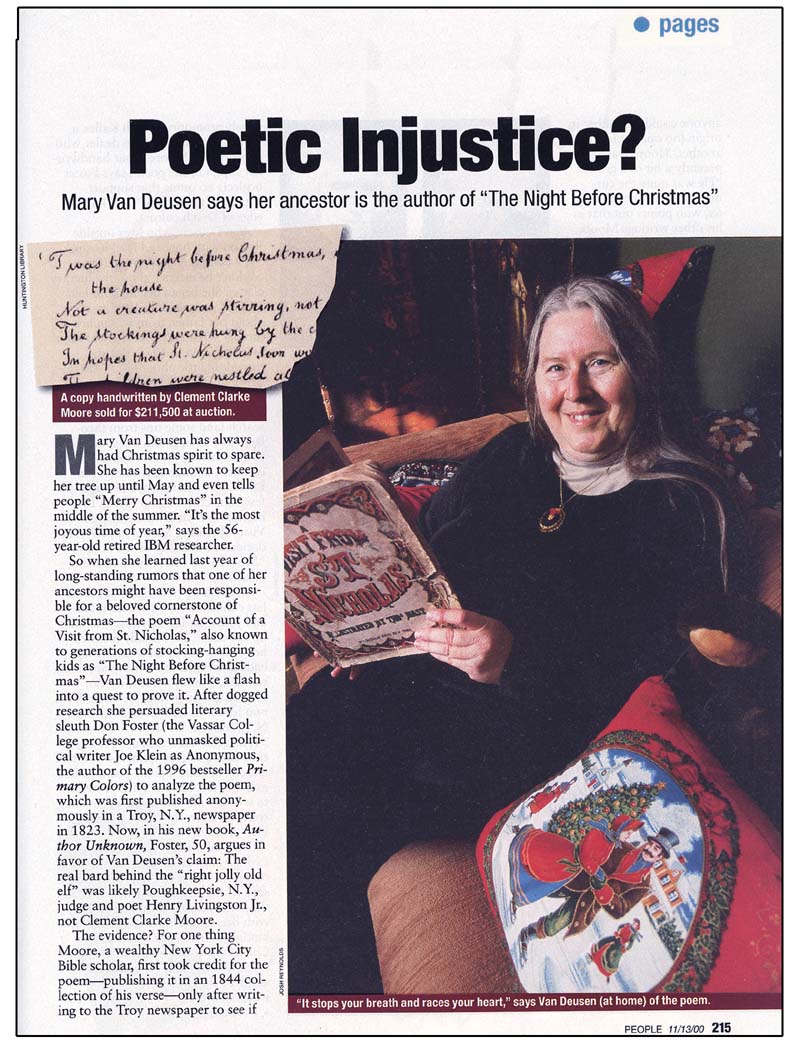 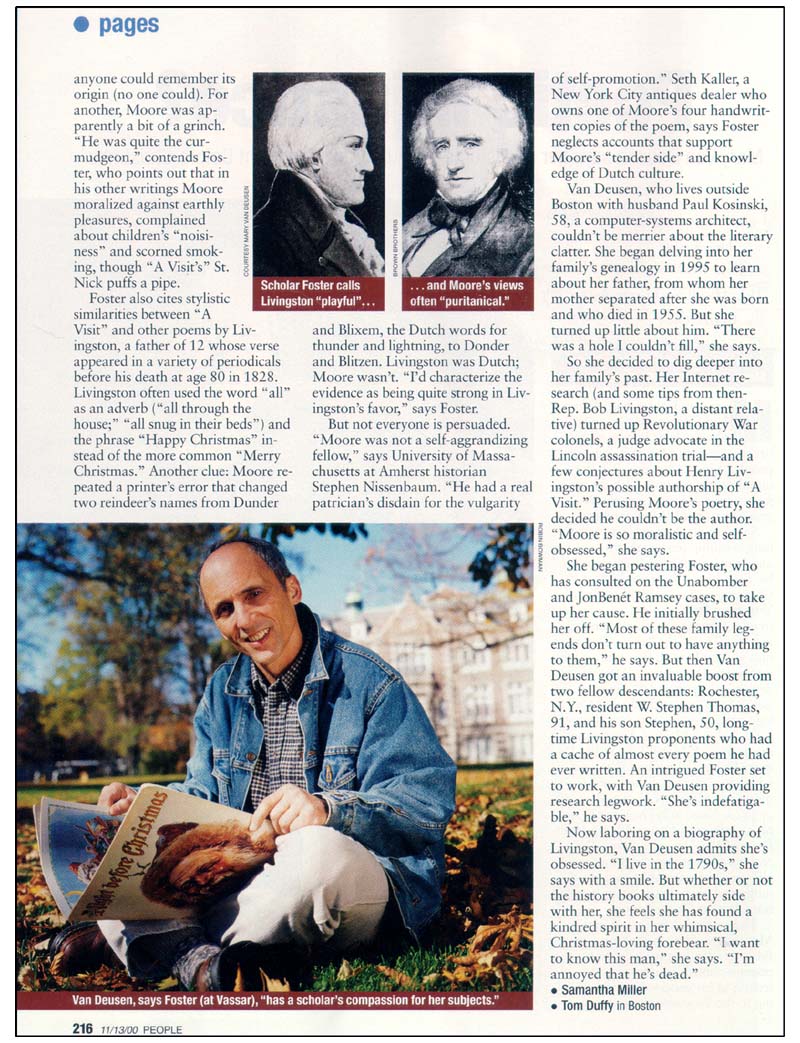 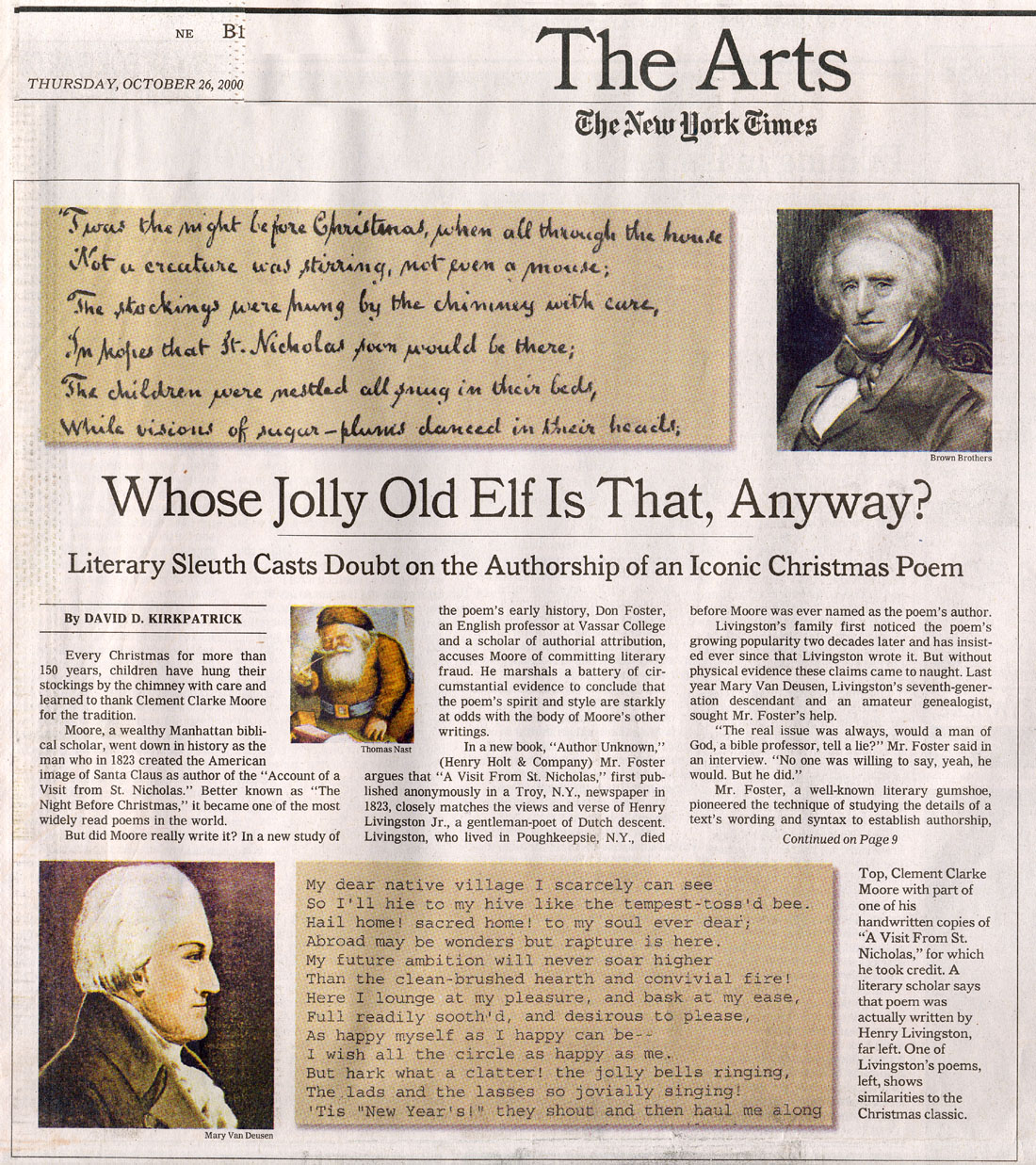 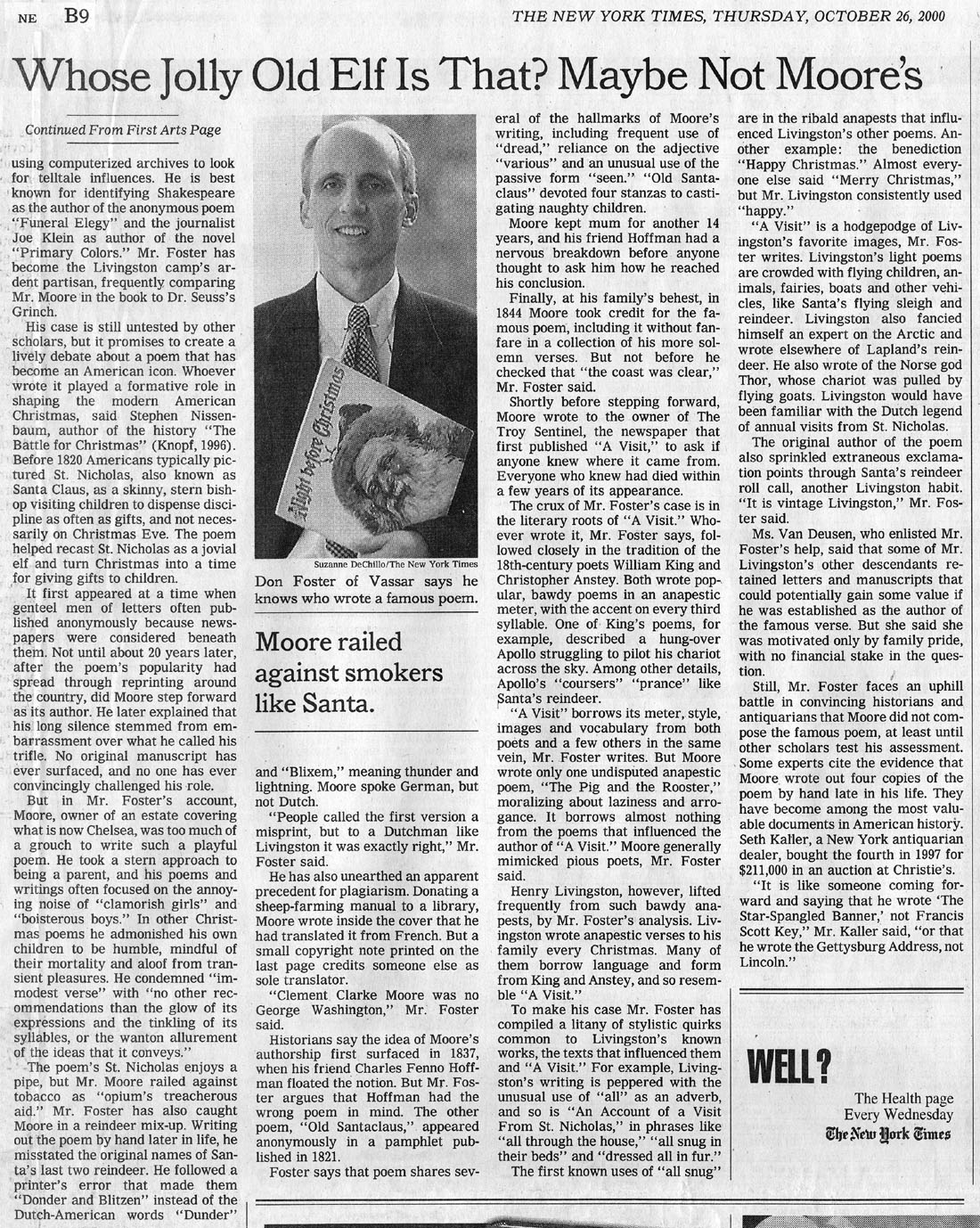 Mac is a purer academic, one of the major Shakespeare scholars, and his work basically made it around the community of his peers in attribution analysis, rather than in People Magazine. But it did have an impact.

A Mock Trial Calls It For Henry

The main objection to Don and Mac's work has come from a collector who had purchased a handwritten copy of the poem whose value plummeted before he could resell it after Don's book came out. He hired a paranormal investigator to write an attack article and he has been mainly responsible for publicity. He did eventually sell his mss.

To my dear brother Beekman I sit down to write
Ten minutes past eight & a very cold night.
Not far from me sits with a baullancy cap on
Our very good couzin, Elizabeth Tappen,
A tighter young seamstress you'd ne'er wish to see
And she (blessings on her) is sewing for me.
New shirts & new cravats this morning cut out
Are tumbled in heaps and lye huddled about.
My wardrobe (a wonder) will soon be enriched
With ruffles new hemmed & wristbands new stitched.
Believe me dear brother tho women may be
Compared to us, of inferiour degree
Yet still they are useful I vow with a fegs [1]
When our shirts are in tatters & jackets in rags.

Then bounce all hands to Fishkill must go in a clutter
To guzzle bohea and destroy bread & butter
While you at New Lebanon stand all forlorn
Behind the cold counter from ev'ning to morn
The old tenor merchants push nigher & nigher
Till fairly they shut out poor Baze from the fire.


Out out my dear brother Aunt Amy's just come
With a flask for molasses & a bottle for rum
Run! help the poor creature to light from her jade
You see the dear lady's a power afraid.

Souse into your arms she leaps like an otter
And smears your new coat with her piggin of butter
Next an army of shakers your quarters beleager
With optics distorted & visages meagre
To fill their black runlets with brandy & gin
Two blessed exorcists to drive away sin.

But laugh away sorrow nor mind it a daisy
Since it matters but little my dear brother Bazee
Whether here you are rolling in pastime & pleasure
Or up at New Lebanon taffety measure
If the sweetest of lasses Contentment you find
And the banquet enjoy of an undisturb'd mind
Of friendship & love let who will make a pother
Believe me dear Baze your affectionate brother
Will never forget the fifth son of his mother.

P.S. If it suits your convenience remit if you please
To my good brother Paul an embrace & a squeeze.

Full well I know what direful wrath impends,
From Fashion's gay and numerous host of friends,
O'er all who blindly list not in her cause,
Nor swear eternal fealty to her laws.
I know with what despotic sway she rules
O'er old and young, o'er wise as well as fools;
In what imperious tones she bids the throng
Obey her word, though Heav'n pronounce it wrong.

Yet, though my crimes against this power so high
Be numberless, and oft of deepest dye,
Leave I entreat to extenuate my blame:
A right which guiltiest criminals may claim;
E'en they who fly not at a Lady's call,
And dare withstand the attraction of a ball.

Of magic zones and rings you oft have heard,
By fairies on their favorites conferred,
Which pinch'd the wearers sore, or made them bleed,
Whene'er they went astray in thought or deed.
Nor think these stories false because they're old,
But true as this which soon I will unfold.

Sweet sleep had shed its mists around my eyes,
And fancy's motley forms began to rise,
When, 'mid these fleeting phantoms of the night,
A vision stood distinct before my sight.
Though far below the human size it seem'd
A dazzling brightness from its visage beam'd.
My airy dreams it seem'd to chase away,
And thus in sweetest accents deign'd to say:

"Hail, Youth! In me behold a friendly power,
Thy guard in every place, at every hour,
Who thus appear expos'd to mortal view,
Clearly to mark the course you should pursue.
To me 'tis giv'n your virtue to secure
From custom's force and pleasure's dangerous lure.
I watch the motions of your youthful mind,
Rejoicing when to virtue 'tis inclin'd;
But when a growing folly is descried,
To root it out, no art I leave untried.
Those drugs I mix in pleasure's luscious bowl
Which pain the body to preserve the soul.
That listlessness, those qualms, those aches I send
Which dissipation's giddy round attend.
Nor let these warnings, by your Guardian giv'n,
By winning pleasure from your thoughts be driv'n.
For if, regardless of my friendly voice,
In Fashion's gaudy scenes your heart rejoice,
Dire punishments shall fall upon your head:
Disgust, and fretfulness, and secret dread.
Unmeaning forms shall swim before your eyes,
Wild as the clouds which float in vernal skies.

But if true wisdom all your thoughts employ,
I promise lasting peace and health and joy.
A mind untouch'd by malice or by spleen
Shall make your slumbers light, your thoughts serene;
And through the ills which mortals must betide
I still will be your counsellor and guide."

So spoke the friendly power; then, waving light
His azure pinions, vanish'd from my sight.
Such is the guardian Genius, ever near,
Whose love I strive to gain, whose wrath I fear.
But, when his favoring smiles I would secure,
Complaining friendship's frown I oft endure;
And now, for open breach of Fashion's laws,
A criminal, am forc'd to plead my cause.
Such is my lot; and though I guilty prove,
Compassion sure my Judge's breast will move.
Not pardon for my fault I hope to find;
But humbly pray, you'll change to one more kind
The threaten'd sentence, cruel as 'tis hard,
To lose forever your benign regard.

Thanks for the ping a reeno! Looking forward to clearing the decks a bit so I can hunker and watch/listen!

Thanks for that..... loved the pix with the words!

Henry captured it, didn’t he?

>>Henry captured it, didn’t he?

So many times. The one that I think you would love was a religious one:

Without distinction, fame, or note
Upon the tide of life I float,
A bubble almost lost to sight
As cobweb frail, as vapor light;
And yet within that bubble lies
A spark of life which never dies.


Now THAT should be a song.

I have to admit that I learned most of my history researching Henry and his family. I just couldn’t get into the dates and names when I studied American history. It makes SUCH a difference to know that John Jay stayed with Henry and his wife right after Henry’s son died, and that he wanted Henry to take Jay’s son in while Jay was ambassador to Spain. Suddenly, history comes alive for me. Suddenly, I want to read EVERYTHING about John Jay.