In the recent weeks of the document releases for the October 1 Las Vegas Shooting investigation, I exclusively reported that revealed Stephen Paddock had three additional guests registered to his room at the Mandalay Bay when he allegedly committed mass murder from the 32nd floor of his suite, murdering 58, and leaving more than 800 injured as they fled the concert venue and rapid gunfire.

On Tuesday, July 3rd, the LVMPD scheduled document issue consisted of 3 body camera videos and 34 audio files. When first listening to the audio, you would assume that it is 911 call recordings, as it is chronicled with a constant time and date stamp interruption that matches the time and date stamp logs from all 911 audio recently released. It is also recorded in a call list of 39 recordings.

However, both this audio and the files from the previous week’s release are recorded radio traffic with the 911 dispatcher’s time and date stamp interrupting the broadcast continuously. This week’s release included over 19 hours total of radio traffic with the continuous recording of the time and date stamp occurring on average approximately every 10 seconds or so.

This constant interruption proves to be a challenge while trying to listen to this radio traffic, and it is not plausible that this would be how it would be logged or recorded internally with the LVMPD, or with the contracted service that hosts the audio files

Despite the challenges presented in sorting through this audio, I was able to identify the radio traffic that matches with the dispatch log showing the three female guests whose names were redacted on the dispatch logs.

The following excerpt can be heard with a time/date stamp of October 1 at 23:00:57 hours: AUDIO AT LINK

“I’ve got a couple units up in the control room, and they’re briefing on the 32nd floor, room 135. Possible suspect, ID, gonna be last name Easy-Adam-David-David-Ocean-Charlie-King, first name Stephen with a PH. That is who the room is registered to, Break.”

It does appear in this broadcast that the last name of Paddock was misrepresented based on the phonetic alphabet usage of the letter “E” in place of a “P.” All other information seems to line up with what was reported to be found in the room registration prior to the breach of room 135.

The additional confirmation of these female guests in Paddock’s room not only still leaves many questions unanswered; it brings forth even more questions and greater speculation on the investigation.

Prior to these names being released, it was left a mystery as to who these additional people may be. The LVMPD nor the FBI has given any indication that there are persons of interest being investigated, in particular, any additional parties that were registered to the rooms.

There are no witness reports provided thus far that show evidence of interviews with these three identified females, or any supporting evidence at all that they were even investigated or detained.

There was absolutely zero mention of the additional three female guests in the FIT investigation report that was released by the LVMPD in January.

Sheriff Joe Lombardo has empathetically stated that he nor anyone in his department will be providing any interviews or answering any additional questions regarding the Las Vegas Shooting investigation, despite appearing in a “Town Hall” meeting that recently aired June 26th on the local Las Vegas news channel 3 KNSV NBC affiliate. This was promoted as a Town Hall live event, although it was recorded earlier that day and no additional media or public were permitted inside.

During this two-on-one interview hosted by Channel 3 in Las Vegas, Lombardo did reference Marilou Danley, stating there are still some outstanding questions regarding her actions. However, he did not elaborate what those questions were, or if they could possibly lead to any charges. There was no mention of any additional parties that were under investigation at all, and still no mention of any other females registered to Stephen Paddock’s rooms.

Given the events of that night, the number of weapons and ammunition found in the room, and the ongoing evidence that does support there were others involved in this massacre, the public has a right to know what actions have been taken to identify these females and if they have been investigated.

Who are Joanne, Laura, and Katie? How did they know Paddock? Are they relatives? Where were they during and after the shooting? What were their actions leading up to the night of the shooting? Why were they not disclosed in the LVMPD FIT investigation report? Why does Lombardo and the FBI seem to be hiding this information by omission?

Along with the burning questions about these females, the release of this audio should be under serious scrutiny. What was the purpose of releasing as 911 audio? Was it by design? Was the release with the constant interruption a deterrent so most would give up on listening? Will the courts hold them accountable for quality document releases to the public?

Despite the difficulty in deciphering this audio, analyzing the bodycam footage, read through all previously released witness reports and dispatch logs, Big League Politics will continue to provide detailed updates for the public and ensure the information is provided with full disclosure on what transpired the night of the Las Vegas shooting.

Checked out of Caesar’s Palace early one Saturday morning following completion of a trade show. Waiting out front for an airport shuttle at 6am. Steady stream of female “guests” leaving the property, walking, taking taxis, jumping into pimp cars.

Something real damn stinky being covered up there.

Maybe, but who needs 3 prostitutes?

guests by the hour.

I don’t think whores register do they?

The hotels that I stay in do not allow hookers in the rooms unless your register them under their real names and they show their ID at the front desk.

At this point, the FBI shouldn’t be investigating anything, since it has no credibility.

How many of the three were FBI? 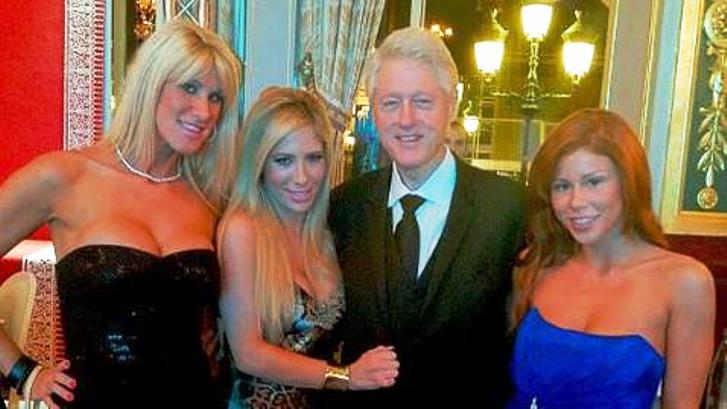 She is indefatigable. Bravo. Someone still attempting to solve the country’s biggest shooting massacre.

The one on the left looks a like a tranny.

The police phonetic alphabet is “edward”, not “easy”.