FULL TITLE: Stunning pictures of Michigan's St Joseph Lighthouse transformed into giant icicles as arctic blast continues to sweep across the US

With sub-zero temperatures, severe wind chills and snowfall, millions across the eastern US have been desperately trying to stay warm this week.

But one photographer chose to brave the frigid weather for hours on end - to capture these stunning photos of St Joseph Lighthouse in Michigan.

Donning sturdy boots and warm clothing, Joshua Nowicki trekked along the icy shore of Lake Michigan on Thursday morning, armed with a camera.

He then captured a breathtaking array of photos of the frozen 30ft lighthouse and its pier, both of which were completely blanketed in white icicles.

He later uploaded the images to his Facebook page, alongside pictures of circular formations of ice - what he dubbed 'ice pancakes' - on the shore.

'Ice-covered lighthouse and 'ice pancakes' in St Joseph, Michigan,' wrote Mr Nowicki of his photographs, which were taken during a blizzard.

Scroll down for video Pretty awesome. We don’t live too far away but during the snowstorm we hibernated this week! Someone who doesn’t have the flu can go out and take pictures of the awesomeness :-)

Heatwave moving in tomorrow with highs expected in the 20s.

Because our media sucks. Click The Lake Michigan Lighthouse To Donate
Support FR, Donate Monthly If You Can

they have wonderful springs, summers are fine, falls are great....

winters there just don’t agree with us, however.
i wonder why?

10 posted on 01/10/2015 5:07:38 PM PST by faithhopecharity ((Brilliant, Profound Tag Line Goes Here, just as soon as I can think of one..)
[ Post Reply | Private Reply | To 1 | View Replies]
To: Morgana
Meanwhile, we are cowering under our granola bars here in California because the warm sky is falling:

redheart, DEER PARK, about an hour ago
ALGORE tried to warn us about gLOBaL wARmInG

Janice, Los Angeles, 41 minutes ago
Seriously? You still don't get it? Global warming (i.e. Climate change) is about just that. Extremes in temperature of the Earth's climate system.

13 posted on 01/10/2015 5:32:27 PM PST by mommyq
[ Post Reply | Private Reply | To 12 | View Replies]
To: Morgana
No way I would ever upstage something like that!!! Two things I wanted to do and will probably never do in my life with photography. Running water effect and lighthouses. I got too late of a start with digital. When I was younger, I could scramble up, down and over almost anything.

This is one of my prizewinning photos, not many of those, but the cold and icicles reminded me of those days. This was early January 2004. It took 2 days to get this shot with my little Olympus C4000Z. I drove out about 15 miles, set up and took a bunch of shots, got home and found they all were overexposed and had blown highlights! No shooting in RAW in those days but I was already post processing in Photoshop.

So the next day the sun shone again (I had waited for that), I went out, adjusted for the overexposure, got set up and got this shot. I was about 63 at the time, and some rural-type men stopped because they thought I was in trouble, wanted to help. Then I got lost coming home, took a wrong turn and went way out over 30 miles before I got headed the right way again.

I did some more in the freezing cold, Christmas lights in particular, but I have downright envied some hardy types who can trek in terrible condition to get wonderful shots such as the lighthouse photographer did. 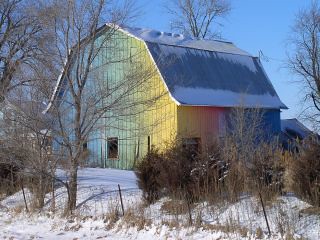 Thanks, Morgana. Beautiful...but painful, too. : )

You have to admit the two days of winter we had was kinda fun.

Thank you! It was featured in a movie, but I have never been able to find it.