This just exposes the Democrats completely. The situations with Biden and Kavanaugh are similar. In one case, they had a complete meltdown, and declared that the accused was completely unfit to be a Supreme Court justice. Imbeciles such as Senator Bluemthal of Connecticut declared that it was up to Kavanaugh to provide evidence of his innocence of the grave charges against him. Senator Hirono of Hawaii declared women must be heard AND believed, and that men need to sit down and shut up.

If the Democrats reacted the same way with Biden, then leading Democrats would say it’s up to Biden to prove his innocence, that Tara Reade must be believed, and that Biden is unfit to be president. And for good measure, they would demand FBI investigations and congressional hearings, so that idiots such as Senator Whitehouse of Rhode Island could explore Biden’s high school yearbook for clues to the alleged crimes.

Is it because they are Democrats?

Does a bear take bodacious Obamas in the woods?
Is the Pope Catholic?
Oops, delete the Pope question.

Democrats are your enemy, folks. They murder babies. Do you think they would hesitate to murder you if they knew they would get away with it?

We must all ‘wake up’ to the fact and see what Pols, FBI, CIA etal are willing to do to a sitting President and his ‘inner circle’, especially when these people are in the limelight.

What means to you think they wouldn’t go to, to slap down one of us if we ‘get out of line’?

That alone might explain his psychological condition. But then he is also a Democrat. Dead babies and gun control always trump consistency.

You haven’t heard. There are two rule books. Unless Booker is filmed eating a live puppy with a fork, he’s untouched by this hypocrisy.

Of course Booker, and by default, Demonrats are being hypocritical. They want power at all costs, regardless of the truth, and the Rats want Biden in the White House at all costs. They are willing to completely destroy the nation and the principles it was founded on to do it. 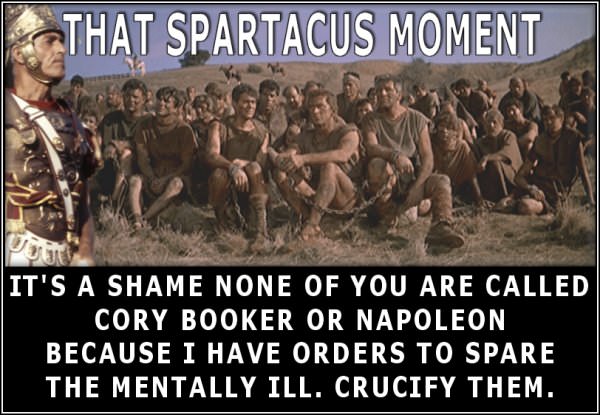 Different treatment for Biden than for Kavanaugh?

Spartacus has always been a useless gasbag.

On Facebook, the same people who called Kavanaugh a rapist are calling Tara Reade a liar.

The Right has rarely wanted to “stoop to their level”, but we need to push back using their rules. Their desired, existential result is worth ANY means to get there. I really hope the sky falls on their world with everything coming from Barr.

“Democrats are your enemy, folks. They murder babies. Do you think they would hesitate to murder you if they knew they would get away with it?”

Which is why they have such a pathological desire to disarm us.

16 posted on 05/09/2020 5:56:11 PM PDT by ought-six (Multiculturalism is national suicide, and political correctness is the cyanide capsule.)
[ Post Reply | Private Reply | To 5 | View Replies]
To: Dilbert San Diego
Imbeciles such as Senator Bluemthal...

Are they classifying her a nut or a slut?

Spartacus is so full of shit he whistles.