What Conservative commentator Mark Levin has called the “Democrat Party Press” are active co-conspirators in the long-running Russia hoax being perpetrated on the American public. These ‘journalists” have been willing minions of larger, darker forces. Time and again the members of the fourth estate have acted in nefarious fashion against the interests of the truth. Against the interests of the public. Against the principles of the Republic. Actively and dishonestly working as designated purveyors of Kremlin disinformation in the form of the Steele dossier.As water boys doing the bidding for high government officials. Of putting forth a narrative now proven, years later, to be a hoax. A lie. A deliberate attempt to work with forces at the highest levels of the Obama White House to undermine and destroy the Presidency of Donald Trump. Nunes: "He [Mueller] was so blatantly dishonest yesterday that he says, well, the Office of Legal Counsel says that you can’t indict a sitting president.

Well, he should have been gone after day two.

He has no Russians, except for the Fusion and Clinton Russians, and possibly the dirty cop, the FBI’s Russians, those are the only Russians that he has, to show connections to the Trump campaign.

Clearly, the Clinton operation is heavily working with Russians or Russian disinformation.

He didn’t take time to look into any of that[!]”

Partial transcript above begins at about the 1:34 mark in the video:
https://www.youtube.com/watch?v=yutgFcr5T9A&list=PLlTLHnxSVuIyw5jPrLmewrpBJAPYKhgml&index=3

[Ranking Member of the House Permanent Select Committee on Intelligence, Devin] Nunes said Clinton's campaign and the DNC "plainly colluded" with the Russians to receive and disseminate false information about Trump" 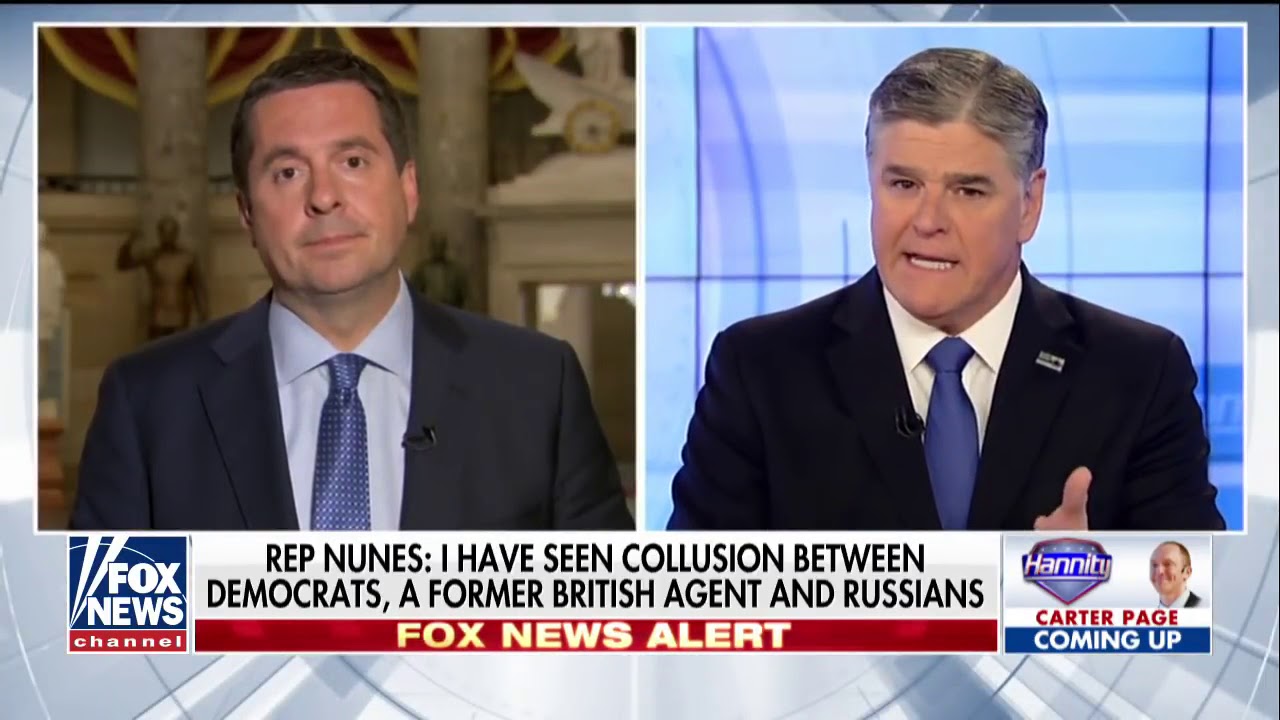 Newly released notes from an Oct. 11, 2016, meeting between Steele and former [Hillary-Obama] Deputy Assistant Secretary of State Kathleen Kavalec cast doubt on the reliability of his dossier and called into question the information provided to the court in the Foreign Intelligence Surveillance Act application that was submitted later that month against onetime Trump campaign adviser Carter Page.

The notes, which Kavalec is believed to have emailed to the FBI in mid-October, indicate that Steele knew he had been hired by Hillary Clinton's campaign and the Democratic National Committee and had been told they wanted his findings made public prior to the 2016 election on Nov. 8.

Nunes said Clinton's campaign and the DNC "plainly colluded" with the Russians to receive and disseminate false information about Trump.

“Foreign politicians talk about Russia’s interference in elections and referendums around the world. In fact, the matter is even more serious: Russia interferes in your brains, we change your conscience, and there is nothing you can do about it.”

"Thanks to recently released notes from an interview the State Department’s Kathleen Kavalec had with dossier author Christopher Steele, a possible bombshell connection between Halper and the dossier has been uncovered.

As discussed earlier in the week on the podcast, those notes also demonstrate Steele failing to keep his story straight between the State Department and FBI, proving how unreliable he is.

In Kavalec’s handwritten notes from their interview she makes note of two of Steele’s dossier sources; “Trubnikov” and “Surkov.”

Surkov is Vladislav Surkov, an aide of Vladimir Putin who is on the U.S.’s list of sanctioned individuals, and Trubnikov is Vyacheslav Trubnikov, who is currently the First Deputy of Foreign Minister of Russia and formally served as the Director of Foreign Intelligence Service.

Interestingly, Trubnikov is an associate of Halper. ..." He was First Deputy Chief of the Russian Presidential Administration from 1999 to 2011, during which time he was widely seen as the main ideologist of the Kremlin who proposed and implemented the concept of sovereign democracy in Russia.

From December 2011 until May 2013 Surkov served as the Russian Federation’s Deputy Prime Minister.[3][4]

After his resignation, Surkov returned to the Presidential Executive Office and became a personal adviser of Vladimir Putin on relationships with Abkhazia, South Ossetia and Ukraine.[5]

Surkov is perceived by many to be a key figure with much power and influence in the administration of Vladimir Putin.[6][7][8]

According to The Moscow Times, this perception is not dependent on the official title Surkov might hold at any one time in the Putin government.[9]

Journalists in Russia and abroad have speculated that Surkov writes under the pseudonym Nathan Dubovitsky, although the Kremlin denies it.[11][12][13][14]

“Foreign politicians talk about Russia’s interference in elections and referendums around the world. In fact, the matter is even more serious: Russia interferes in your brains, we change your conscience, and there is nothing you can do about it.”