We literally blew into Cheyenne last night. Wyoming never disappoints but yesterday was one of their epic High Wind Alert days, complete with Interstate closures to “light high-profile vehicles.” I’m not positive exactly what sort of vehicle that is but I’m pretty sure empty semi-tractor trailers qualify as you always see a few of them flipped over on the side of the road when the wind socks are flying parallel. 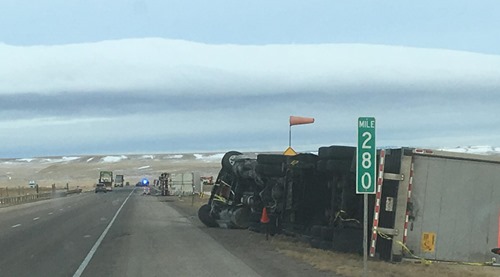 It was also inauguration day for Mark Gordon, Wyoming’s new governor. We should have known something was up as all the hotel rates were hyper-inflated. Another clue: when we checked in the lobby was filled with tuxedos and cocktail gowns.

Still, this was hardly the shindig an inauguration is in other states. It started with the swearing in ceremony early yesterday morning: 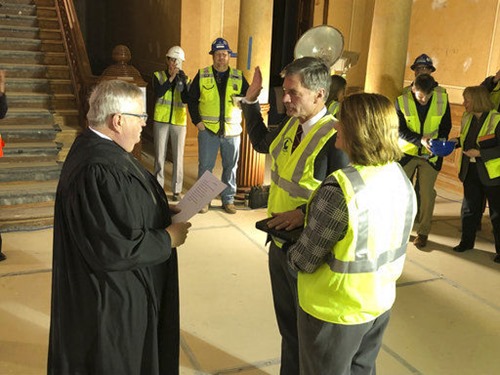 No, Governor Mark Gordon was not acting in solidarity with France’s "Gilets Jaunes" – although for some reason gas prices are about 30 cents higher here than any other state we’ve been through on this trip. Apparently the state capital building has been closed for renovations for over 3 years and safety restrictions required the vests. This is a bigger story than you might initially think: if the halls of government in Wyoming can be closed for over 3 years with no major complaints I think Washington better sit up and take notice. “Essential” employees might not mean what they think it means.

Other oddities associated with yesterday’s inaugural: the day started with a prayer service at Saint Mark's Episcopal Church. The newly minted governor took communion in his cowboy boots: 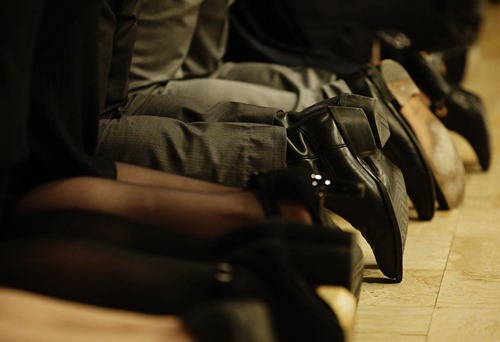 Based on the hem in his slacks I’m going to venture a guess that he  was not wearing a bespoke suit. 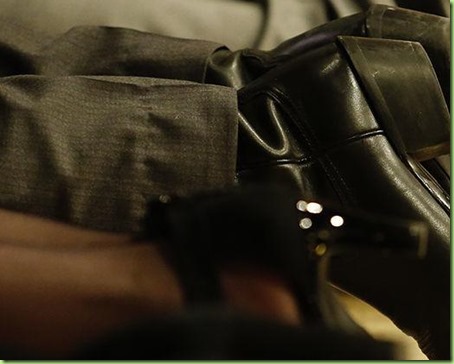 Don’t ask: I don’t know, I just notice these things.

The inaugural ball was held at the Little America ballroom, the swankiest place in town now that the historic Plains Hotel closed down. The new Guv sabered a bottle of champagne, 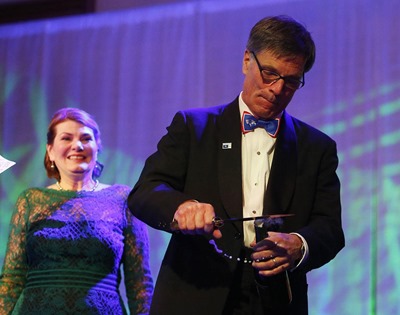 Wyoming style: with a Bowie knife. 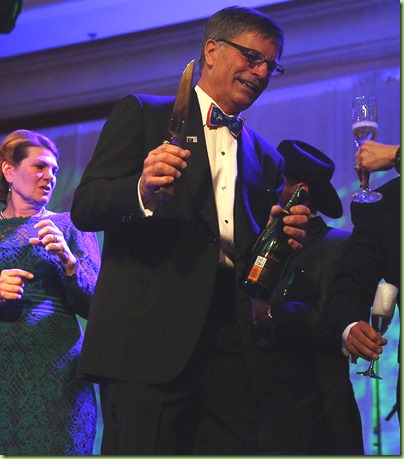 I think we need a little more Wyoming and a little less Washington. What do you think?

Heh, reminds me of the Longmire novels. Wonderful descriptions of Wyoming along with a hero that is obviously anathema to progressives...a man with brains, cojones, and morals. Don’t know if the new gov is a Walt Longmire, but hopefully there are some Walts there that’ll control any influx of progressives - who always ruin whatever they touch.

More Wyoming. My parents were married in Ogden Utah in February 1947 (at the parsonage; there was a coal miners’ strike and there wasn’t enough coal to heat the church) and drove across southern Wyoming to their honeymoon in Denver. My parents said there was a “ground blizzard” for much of their drive along old US 30; sunny but high winds blowing the drifting snow horizontally a few feet above the ground. They said it was surreal (and kind of dangerous); you could see oncoming cars absolutely clearly from the windows up but you couldn’t really see the road.

3 posted on 01/08/2019 6:33:40 AM PST by hadrian
[ Post Reply | Private Reply | To 1 | View Replies]
To: NOBO2012
There is an interesting story about Little America, the best hotel in Cheyenne. The original one was built off I-80 near Green River in the western end of the state. The founder of the chain was stranded there with his sheep in a three day blizzard and prayed to God that if he somehow survived, he would do honor to his fellow sojourners.

He not only survived, but grew wealthy from wise investments in gas and oil and built his first hotel complete with restaurants, shops and gas station not far from where he sheltered himself and sheep in that blizzard. Little America, Wyoming was a resounding success when it was completed in 1952 and was soon thereafter duplicated with similar resort like gas stops in Salt Lake City, Utah and Cheyenne, Wyoming. It is estimated that one in three cars along I-80 stopped at a Little America resort in its halcyon days.

Robert Holding, the founder, died in 2013 with a net worth just north of $3 billion, despite giving away much of it in his earlier years.

I hope the good folks of Wyoming hold on to their roots and don’t slipping blue like their neighbors in Montana and Colorado.

I left back woods Florida for the military. Left the military for Kansas, left Kansas to chase a job in Kalifornia, left Kali for Colorado, been here for a couple of decades.

Now the libs have taken over the Colorado legislature and are starting the process of turning Colorado into Kali. Looks like I am going to have to be leaving Colorado for Wyoming before too much longer.

I live in Wyoming, Originally from Idaho, although I have also lived in Michigan, Minnesota, North Dakota, California and New York.

(Please convince everyone that the boring barren scenery of the I-80 corridor is representative of the rest of the State .... that way we’ll keep the liberals out and Wyoming will stay Forever Free!!!)

We’ve already picked out a home in Wyoming, in the event the communist takeover here in Colorado gets out of hand.

8 posted on 01/08/2019 7:23:22 AM PST by G Larry (There is no great virtue in bargaining with the Devil)
[ Post Reply | Private Reply | To 1 | View Replies]
To: taxcontrol
Born and raised in CA. I spent my life in pursuit of skiing, so I've always lived in mountain towns - Sierras, Rockies and north Olympics. Skiing is a lifestyle of freedom that naturally rejects oppression and governmental overreach. I never gave it much thought in my younger years, but took a corporate job in California in the 80's and saw the elimination of personal freedom and property rights increasing non-stop.

Left CA in '02 for the total commitment to less government and preservation of freedom in Northern Idaho and we're living the dream, but well aware that we still have to be vigilant as people who like our environment come here and try to bring their liberal ideas with them.

There will only be a few blue states in twenty years..

Looks like some of the truckers drive the same way in high winds as they do in heavy rain and snow storms....

We need more fly over country and less Washington!!

Been watching the American West on Amazon and heard Keifer Sutherland praise the West for its experiment in freedom. Wonder if that was all scripted because I can’t imagine a socialist like Sutherland really approving of the American Western way of life. You mess up you were dead. No welfare system. Nothing.

>>I hope the good folks of Wyoming hold on to their roots and don’t slipping blue like their neighbors in Montana and Colorado.<<

Well I don’t like being the bearer of bad news, but if you folks think Wyoming will escape the encroachment of the Liberals/Progressives/Socialists/Communist/Globalists, take a look at any of the Wyoming Dept. of Tourism literature. The folks that create it are doing everything possible to lure that undesirable crowd to come and enjoy everything the State has to offer. Wyoming and a precious few other States not yet ruined by those miserable people are living on borrowed time. Read it and weep, my friends!